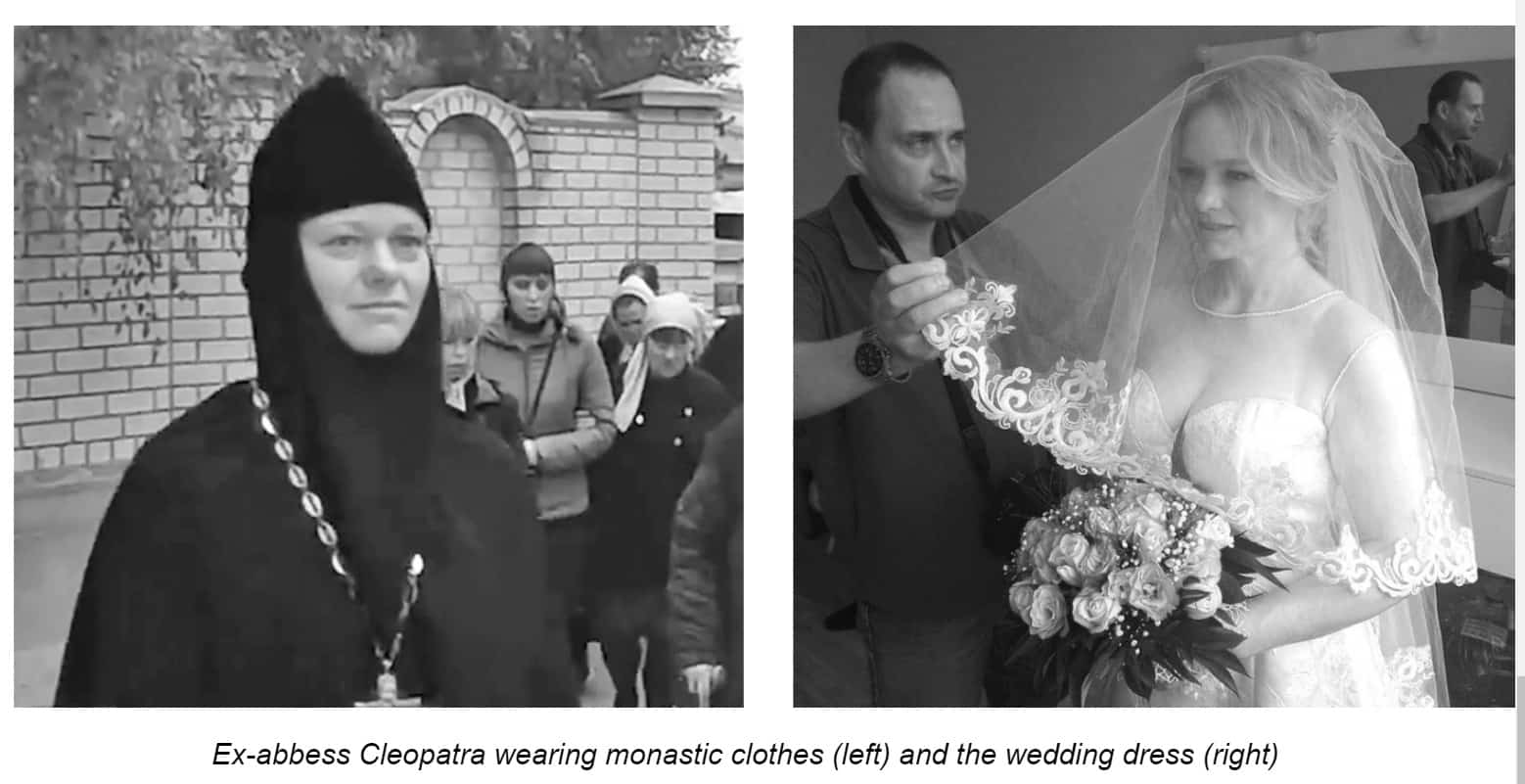 By Nadia Bazuk for VT

As is known, there are two Autocephalous Churches in Ukraine: the one recognized by the Ecumenical Patriarchate, the Church of Greece and the Patrarchate of Alexandria, namely the Holy Church of Ukraine (HCU), and the so-called Ukrainian Orthodox Church – Kyivan Patriarchate (UOC-KP) lead by patriarch emeritus Filaret (Denisenko), who left the HCU six months after its was created.

What these organizations have in common is their staffing approach. For example, former abbess Cleopatra of the canonical Ukrainian Orthodox Church who defrauded the treasury of the St. Nicholas Convent and seized control over its website and online donations in late 2018 was accepted to the HCU diocese of Zaporizhia in spring 2019. In this regard the Convent even had to suspend its charitable activities.

First time Cleopatra was captured on the photo with other clerics of the HCU bishop Photius (Davydenko) of Zaporizhia and Melitopol in April 2019. She was said to serve there as a candle seller at the HCU St. Trinity cathedral, since Photius didn’t have much trust in her after the embezzling of the UOC money and didn’t want to put her in responsible positions. Of course, that was far from satisfying her ambitions.

As Ukrainian Orthodox blogger Alexander Voznesensky has noticed, in March 2019 the runaway abbess created a Facebook account under her secular name Nadia Muzychka. There she posted news about the HCU at first. However, as autumn set in she fell in romantic mood.

And in spring 2020 an object of her attraction appeared: on March 17, 2020 she even created another Facebook account as Nadia Svitla, where she started reposting messages of Fr. Andrei Fomenko who was a military chaplain at the 55th Artillery Brigade. She praised her fancy man as “a wonderful cleric,” and in his turn while expressing his gratitude in the comment the Fr. Andrei called her Matushka Nadia, which evidenced that Nadia Svitla and former UOC abbess Cleopatra are the same person.

Then, on June 14 a photo that captures Nadia and Fr. Andrei was published by an owner of wedding boutique Olena Yaroshenko who runs a charity project for the military. “Father Andrei addressed me and said that he was willing to get married,” Yaroshenko said. “Of course, I didn’t request a marriage certificate from them – it was a priest marrying. What doubts could I have?” – she added.

Photo that captures Fr.Andrei and ex-abbess Cleopatra in the wedding boutique

However, the ceremony wasn’t so simple for the couple. Bishop Photius saw the wedding photo and recognized Fomenko’s bride Nadia as abbess Cleopatra. So, according to Apostolic Canon 25, Canon 1 of the Council of Neocaesarea and Canon 18 of St. Basil the Great, Fr. Andrei was banned from priesthood.

And Fomenko’s false excuses that the photo was merely a joke and they only played their roles for the sake of Yaroshenko’s boutique promotion didn’t change bishop’s decision. Photius might have noticed that Nadia’s surname on Facebook had been changed to Fomenko and that she had been captured on the photo with a wedding ring on her finger already.

Nadia Fomenko with a wedding ring on her finger

As a result, despite his claims to “accept the sanctions with humility” Fomenko transferred to the Ukrainian Orthodox Church – Kyivan Patriarchate. Fr. Andrei and his spouse quit promoting the HCU and started posting news about Filaret (Denisenko). As Alexander Voznesenky notes, we can only guess whether the respective UOC-KP administration have been informed about the scandalous backstory of Fr. Andrei and ex-abbess Cleopatra.

Unfortunately, it is not the only example of uncanonical attitude and breaking monastic vows by schismatic clergy, and it is to be regretted that the main reason why this case was addresses by the HCU hierarchy was that the naive boutique owner posted the fugitive abbess’ wedding photo and the story became public.