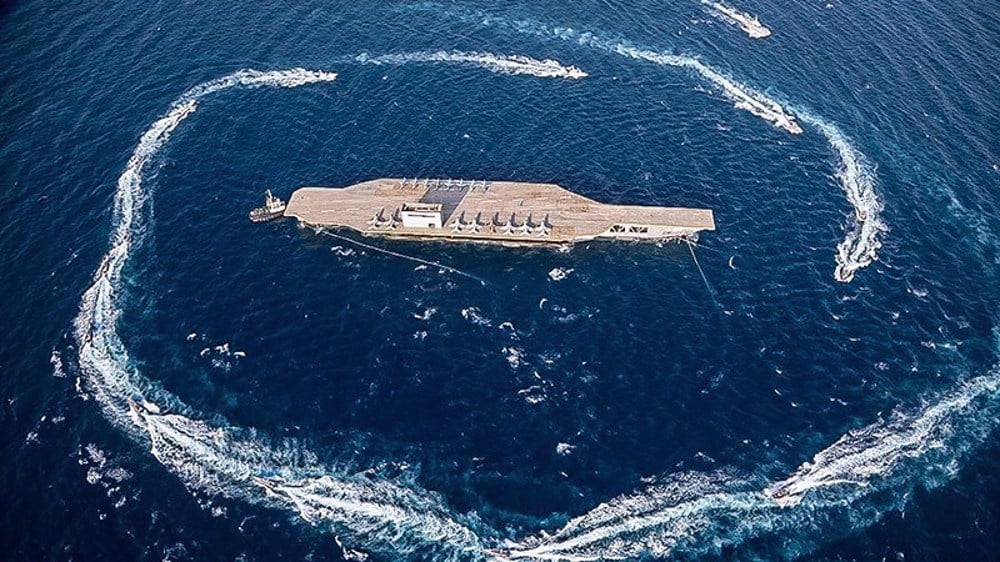 Iran’s military has just held a bunch of war games in the Strait of Hormuz featuring a mock-up of US aircraft carrier, which of course would be the prime target if the US ever attacked Iran—its fleet in the Persian Gulf would face serious problems.

I think Iran is sending a message that if Bibi Netanyahu and Donald Trump think that they need to start a big Middle East war to try to keep them out of prison and keep them in power, well, they need to think again, because that war might not go the way that they would hope that it would.

I think Iran is demonstrating that it is entirely capable of actually winning this kind of war, and that’s not really sort of an empty boast or display from the Iranian side. Even the American side has had to admit over the past decade and a half, that it very likely would lose a war with Iran, and that’s the reason the US has not attacked Iran.

The plan after 911, as we know from General Wesley Clark, was to take out seven countries in five years with the seventh and most important country being Iran, after Iraq and Afghanistan had been occupied and US bases in those two countries surrounding Iran could be used to attack Iran.

So that was the plan. But the problem was twofold. First there was pushback after the 911 neoconservative coup d’etat from people who had opposed it or had certainly not supported it. That is the Realist School of American policy. And those people, led by people like Brzezinski were actually horrified that the extremist Israeli Likudinik Zionists had hijacked the United States on 9/11, in order to use its military to destroy their opponents in the region.

And so those realists saw that this policy of letting America’s forces be hijacked by Israel was bad for the US. And that pushback was the first factor that stopped this push to war with Iran, which is really what 9’11, and the 9/11 wars were all about.

So the second factor and perhaps the most important factor is that Iran’s defenses are quite formidable. And in fact, in 2002, the US military held a fictional war-game scenario in which the US had mocked up a war with Iran. And guess what, Iran won. And they didn’t just win by attrition, or in a small way, they won a huge victory by sinking the entire American fleet five minutes after the war began.

The Iranian mock up side — the red team in the exercise — was led by General Van Riper, who used the kinds of tactics that Iran would use. That is not playing the conventional war game, but using sneak attack, speedboats and things like that targeting the American carriers, and then using its advantage of geography, where the mountains on the shore of the Persian Gulf house all kinds of anti-ship missiles that are dug in so deep that they can never be taken out.

And so essentially the US military has known ever since then that a war with Iran would not be a good idea. And now, today we have Trump and Netanyahu both in a position where they might think that that war actually would be a way to stay out of prison.

I think the Iranians have just sent a very strong message to both Trump and Netanyahu, to not think that way. And I do think that the wiser elements in the establishments in Washington and Tel Aviv will very likely be paying attention.

IRGC commander: Iran won’t initiate aggression, but will be offensive in tactics

Iran’s Islamic Revolution Guards Corps says it would never be the party to launch an offensive against any country, but would assume a fully offensive mode, when it comes to tactical and operational performance.