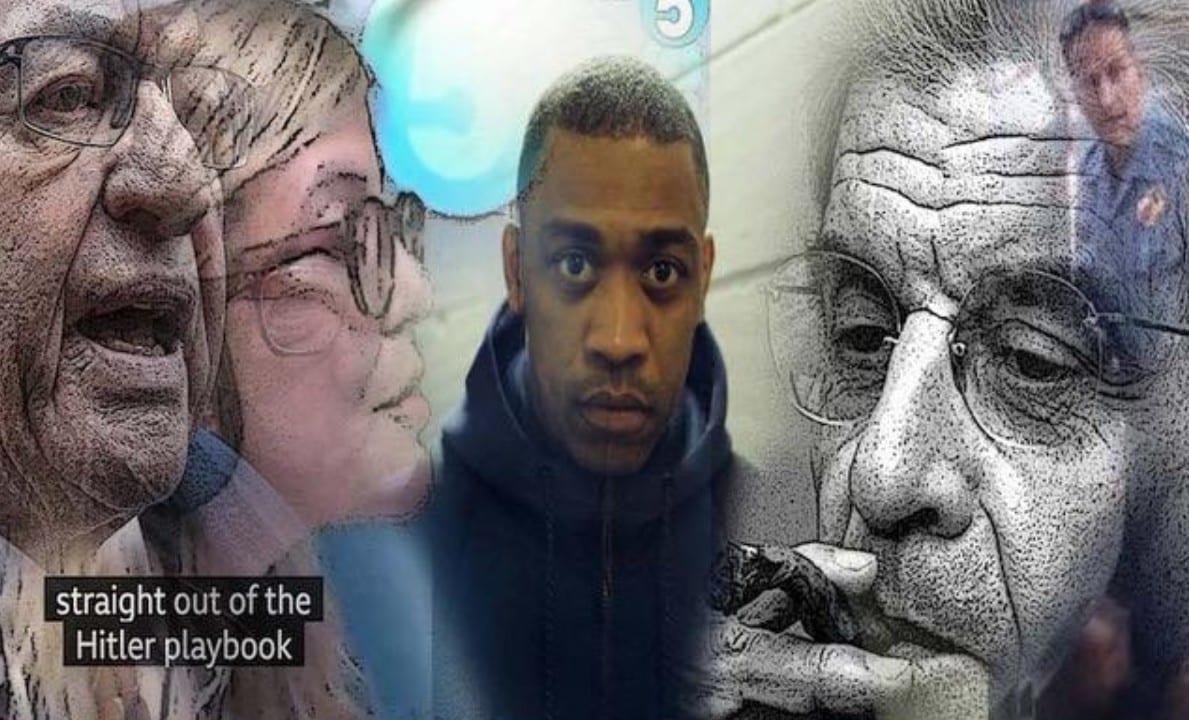 If Britain were a healthy society the #Wiley saga would have triggered an open discussion about race and privilege.

Wiley would be invited to BBC Newsnight, he would be challenged by one of BBC’s anchors, he would be confronted by one or two representatives of the Jewish community, he would have a chance to explain where he comes from. We would be better able to understand the emerging clash between Jews and Blacks.

But Britain is not very healthy at the moment and none of the above has happened.

What happened instead was George Floyd all over again, but with a few major and significant differences. In the case of George Floyd a few policemen engaged in a deadly brutal and insidious act. In the case of Wiley, the entire Zionist league and its allies used a collective public knee to attempt the annihilation of the Black music icon. Another difference reflects on all of us. Following the Floyd murder thousands of Brits went to the streets to loudly proclaim that Black Lives Matter. They confronted the British police, they destroyed statues of slave traders. Who took to the streets to support Wiley? Do Black Lives Matter only so long as Blacks do not open their mouths?

Wiley’s comments didn’t trigger the desirable, if heated, debate because Jewish power, as I define it, is the power to silence criticism of Jewish power. Every means that serves this cause is considered legitimate. Interestingly, the disabling of speech is so extreme that one can’t find out what it was that Wiley said that was so offensive. His tweets were initially removed by Twitter and as his twitter account is suspended.

Every news outlet in Britain and beyond has told us that Wiley’s tweets were horrid and anti-Semitic but no one dares to provide an example. It seems we are not even allowed to know what it is that we shouldn’t say. Possibly the censorship is even more sinister, they don’t want Wiley quoted only to find out that a large number of Brits, possibly including prominent Jewish voices, actually agree with the gist of Wiley’s statement.

Wiley is accused of promoting “Conspiracy Theories” about Jews and their power. This is slightly confusing because Jews often brag about their power and success.

According to the Jewish site Israelunwired, Alan Dershowitz’s message to the Jews reflects a celebration of the power of Jews:

“Why is it that Jews feel they need to apologize? Why do they feel that because they are strong and have contributed so much to the world, that deserves an apology? On the contrary! Jews should feel proud that God has given them such strength. And they have used it to help others. It is crazy that the world still has such negative beliefs about the Jewish people!”

On its face, it seems as if today’s Number One ‘Amalek,’ Wiley, a Black celebrity rapper and our prime Zionist mouthpiece, Dershowitz, agree on the significance of Jews in different domains. However, Dershowitz is entitled to brag about Jewish achievements, the Black voice Wiley is reduced to dust and declared public enemy number one.

Back in 2018 Dershowitz admitted in a Washington Examiner article that “it is true that Jews are represented in large numbers in various professionals such as the academy, finance, and the media.”

Dershowitz also believes that Jewish prominence “is not because they are given preferential treatment. It is because they have proved to be successful at these enterprises. Should they be blamed for that?”

Like Dershowitz I believe that some Jews are gifted in certain areas, I also believe that people who work hard deserve acknowledgment. I am pretty sure that Wiley also agrees with that. So where is the dispute?

In both my writing and talks I keep insisting that there are no “Jewish conspiracies,” all is done in the open, whether it is AIPAC domination of USA foreign policy or Epstein flying world leaders on his Lolita Express, but you can’t talk about it. Dershowitz can brag about Jewish achievements: the rest of us can’t. Maybe we are tapping here into the true meaning of Jewish privilege.

In the last two days I searched the net to find out what words Wiley said. I found no trace, but the BBC, the failure news outlet, was proud to provide us with an extended monologue delivered by Emma Barnett.

"Those words burn. I am sure I don’t need to tell most of you that, but in case I do, they burn deep."@Emmabarnett responds to grime artist Wiley's anti-Semitic tweets

Emma Barnett told her BBC listeners that she went through Wiley’s tweets and they where “straight out of the Hitler playbook of 1930s Nazi Germany.”

According to Barnett, Wiley tweeted that “Jewish people are cowards do something to me, I am waiting.” This doesn’t sound like Hitler to me. It is crude, it is a challenge, it involves an essentialist generalization but contains nothing that echoes Hitler or Nazi Germany. However, they still came at Wiley as hard as they could. Maybe Wiley should be recognized as the last prophet. They may want to consider integrating his tweets into the Hebrew Bible.

“They act rough,” she quotes Wiley as writing, “but they hide behind the police” – in fact, this sounds to me like a tweet by a Jewish pressure group bragging about its intimate “partnership” with UK police (also look here and here).

Barnett quotes Wiley, “who writes the laws, who changes the law, who implements the laws?”  80% of our conservative MPs are members of the Conservative Friends of Israel so the priorities of our ‘lawmakers’ are obvious. Maybe Barnett should use this opportunity and tell us how many Conservatives are friends of Hartlepool, Liverpool or any other Pool in the Kingdom.

“Who runs the world?” Wiley asks. I guess that when Epstein, Maxwell, Wexner and Weinstein are constantly in the headlines, this question may be rhetorical. Does Mrs. Barnett need me to introduce her to the work of Jared Kushner and his role in the Trump administration? Maybe the name Rahm Israel Emanuel rings a bell? Do I have to tell Barnett about AIPAC, CFI, LFI or the Crif?

“Who runs banking?” Barnett quotes from Wiley’s tweet. Maybe Dershowitz could help defend Wiley as he calls upon Jews to be proud of their achievements in this domain. Barnett can also look at George Soros and Black Wednesday. She can look at Goldman Sachs, Greenspan, Yellen… the list is pretty endless and growing by the day.

I guess that Barnett is sincere when she complains that “these words play of a very deep Jewish hidden fear that anti-Semitism rises up.” Yet, is “hidden” the right term? I ask because we are blitzed day and night by repetitions of this very specific Jewish fear. If there is anything that isn’t ‘hidden’ in Britain it must be the ‘Jewish fear of anti-Semitism.’

Emma Barnett doesn’t want us to talk about #Jewishprivilege. I am afraid that pushing all of social media to blacklist a Black cultural hero just a month after George Floyd, with No 10 and Priti Patel also pushing on behalf of Zion, is a privilege no other ethnic minority enjoys, certainly not the bronze community of former world leaders that were toppled one after another in recent weeks.

Barnett declares, “Jews do not run the banks,” True again Emma, but Jews are vastly over represented in every banking and investment sector as Dershowitz boasted above.

“Jews do not run the world!” Absolutely true but AIPAC dominates American foreign policy and is proud of it.

“Where did it get his anti-Semitic memo from?” Barnett asks. I find this question slightly perplexing since statistics confirm that a large segment of Europeans may agree with Wiley. A recent major survey of public attitudes for CNN found more than a fifth of the 7,000 people polled in seven countries believed Jewish people have too much influence in finance and politics. The ADL is telling us in its latest survey that 1.09 billion “People in the world harbour anti-Semitic attitudes” out of 4 billion surveyed. Once again we are talking about 25%. To answer Barnett’s question, If Wiley was really looking for an educational source he had more than a billion people to choose from. It seems as if according to the ADL, one out of four people admit to their feelings about Jews as long as they stay anonymous. This may reveal what Wiley’s ‘crime’ was. He uttered that which most people are trained to keep to themselves.

Wiley gave us an opportunity to meet our demons, to understand what we are for real. The picture that is unfolding from that saga is grim and points to a darker future. We are terrified of our rulers and we are tormented by our own thoughts which we are scared to admit to ourselves. We are living in a world where maintaining a social media account is way more important than our own truth. This is how far we are removed from our Athenian cultural, spiritual and intellectual ethos that made the west into a distinct civilization.

Lacan’s insight helps us grasp the hysteria around Wiley and anti-Semitism. Self-identified Jews are very happy to brag about their successes but the idea that the same success is scrutinized by others devastates their entire existence.

If Britain were an open space, we could openly discuss all of this and move our society forward towards harmony and reconciliation. Both Jews and gentiles would benefit from such a discourse.

But Britain is an occupied zone and for more than a while. It is invaded by fear and dominated by the politics of fear. This type of politics, when it appears in other countries, is called ‘terror,’ ‘fascism,’ ‘authoritarianism,’ ‘totalitarianism,’ and ‘tyrannical conditions.’

Maybe time is overdue for Jews and Goyim alike to decide if these are the conditions they want to live in.