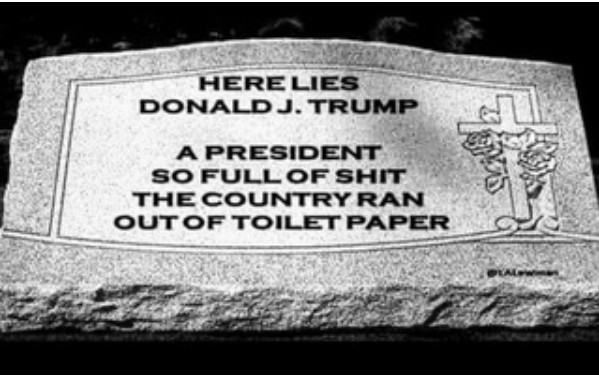 VT: Russians claim illegal Dems keep Trump from securing election through control of the House (voted in by vast majority of American people)

In a carefully written but highly biased article, it becomes clear that Russia is running Donald Trump just as RussiaGate proved.

Moscow: Mail-in voting threatens to make the November election the “most inaccurate & fraudulent” in US history, so the nation may be better off simply postponing it, President Donald Trump has suggested in a tweet.

“It will be a great embarrassment to the USA. Delay the election until people can properly, securely and safely vote,” he wrote.

Sharing his ongoing concerns over mail-in voting, Trump raised the possibility of delaying the election “until people can properly, securely and safely vote.”

​​It comes as Trump’s strongest attack yet on the remote voting system, which is being increasingly employed across the US to accommodate the looming election to the coronavirus pandemic.

Five more states – California, Montana, Nevada, New Jersey and Vermont – are set to join in this year, and around 17 states are going to send mail-in voting applications to every registered voter.

Trump has repeatedly suggested that mail-in voting would invite fraud and allow Democrats to damage his re-election chances this year. He claimed last week, for instance, that foreign governments would counterfeit “millions” of mail-in ballots.

Attorney General William Barr, the president’s ally, floated the same theory last month. When pressed on his comments on Tuesday, he told a House Judiciary Committee he had no evidence that foreign countries could successfully rig US elections with forged ballots but insisted it was “common sense” that they would try to do so.

Republicans also argue that if the ballots are automatically sent to every voter, including inactive ones and those with invalid registrations, this opens the door to rampant fraud

The US president appears to be considering an idea that just a few months ago he angrily dismissed. In April, his presumed Democratic rival Joe Biden claimed the incumbent would “try to kick back the election somehow.”

Trump responded with an angry rebuke, calling it “made-up propaganda,” and adding: “I never even thought of changing the date of the election. Why would I do that? November 3. It’s a good number. No, I look forward to that election.”

Since April, Trump has apparently lost ground to Biden in terms of popularity as the US drags through the Covid-19 pandemic and an unprecedented economic slowdown. Both nationally and in battleground states, the president currently lags behind the former vice president, according to pollsters.

A spokesman for Trump’s re-election campaign later said the president was simply raising the question of a potential delay.

“The President is just raising a question about the chaos Democrats have created with their insistence on all mail-in  voting,” Trump campaign spokesman Hogan Gidley told CNN.

Trump has already questioned the security of mail-in voting on numerous occasions. In May, he launched into a heated quarrel with Twitter after the platform marked some of his posts expressing concerns over potential election fraud with a “fact-check” note suggesting people click it and learn “facts” about the practice.

Regardless of what Trump and Biden think of a potential postponement, the election date is mandated by federal statute and altering it would require an act of Congress, where Democrats currently control the House.