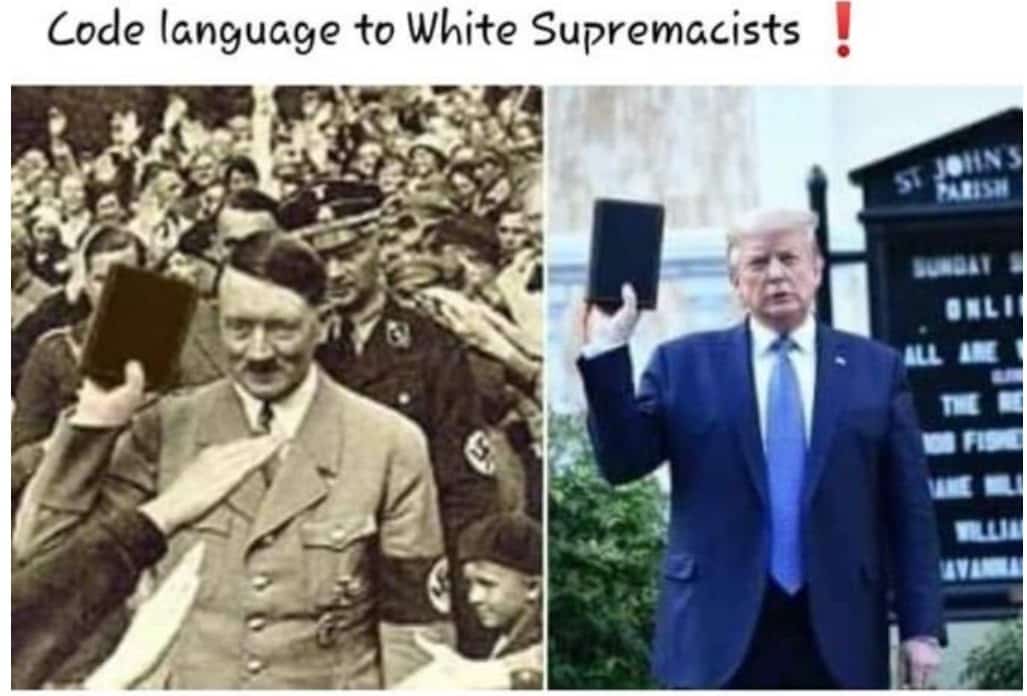 By definition, any and every American veteran should be ‘Antifa.’  This is the definition of the word veteran and defines American values, fighting fascism, racism and oligarchical rule by fascists.

What are fascists?  One man rule, surrounded by gangsters and supported by powerful business elites who exploit economic and racial divisions while pointing their fingers at imaginary enemies, normally “the Jews” but typically fascists like to call people communists or “hooligans.”

Trump is a fascist.

Never before has this nation been confronted with domestic fascism at the level it is today.  Historically, one can look back to the Business Plot against Roosevelt in 1933 when Dupont and Merrill Lynch, aided by the American Legion and KKK/Black Legion tried to coerce General Smedley Butler into supporting a Nazi overthrow of the US.

This was pure Trumpism then, while Trump’s dad was running his New York brothels partnered with Murder Incorporated.

For the past 20 years, the gulf between rich and poor in the US has grown such that millions of Americans, very much the “Invisible Poor,” those living in squats, camping trailers and millions in shacks and mobile homes, 90 percent of them white, nearly a third of them veterans, sharing in nothing resembling America.

That permanent underclass, the new serfdom, of fake jobs, retail, packaging and assembly and the disgusting food industry that is increasingly poisoning America.

Thus, Fox News, Sputnik and RT from Moscow, the Daily Mail in the UK, CNN, the Daily Beast, ABC/NBC/CBS, they all take their orders from the same shadowy people Trump just finished warning us of, who are of course Trump’s masters, not Joe Biden’s.

Fighting fascism and standing up for America means fighting Trump and his supporters, with our lives if need be.  You see, America didn’t really win World War II.  The Nazi, which included millions of American elites, worked to destroy President Harry Truman and, at the end of the war, flooded the US with former Stormtroopers, up to 60,000 and dozens of powerful Nazi elites who partnered with the banks, who built up the Bush family and who became Reagan republicans, neoconservatives and the worst of them the satanic pedophile Christian evangelists.

This Nazi elite that took over the US destroyed the Soviet Union, the evil empire, and fed off the Russian people until Putin stopped them.

Their gangster oligarchs are those that Ian Greenhalgh wrote about so eloquently, as the men behind Trump.

Now America is fighting for her life, yes it is a civil war, a war to restore American freedoms that disappeared after 9/11 and more so after the Trump regime took power.  The war is a war to restore not just rights and freedoms but a real American way of life which has disintegrated at the hands of a vast psychological operation run through Google/Facebook/YouTube/Instagram/Wikipedia/Wikileaks and the vast power of the Kosher Nostra.

If you don’t realize COVID 19 is their creation, you can’t be saved.  You see, COVID didn’t start a few years ago.  It began with American fascists under Richard Nixon and Allen Dulles bringing Japanese war criminals (Unit 731) into the US under Operation Paperclip.  From X files, Season 3 Episode 2:

The fascist underworld that was and is the Republican Party and its Freemason friends in those secret societies spent billions developing biological and chemical weapons, first in the US and later in secret labs around the world, North Korea, Libya, more recently in Tbilisi, Georgia and then, full circle, the University of Pennsylvania where COVID 19 was developed along with a vaccine.

Guess who got the vaccine?

Now Americans are being conditioned to accept up to 2 million dead, 250,000 of them gone already, most over 60, while the American people are being told through hoaxes and conspiracy theories that as long as it is someone else, death is just fine.

Four million of America’s aged are in maximum security prisons, no visitors, no personal contact, no one overseeing how they are treated and many of them are being starved, raped and beaten and no one can do anything about it.

The real deal for fascists is to turn as many Americans into insects as possible.  Thus far their success rate has been startlingly good.

When it comes to fighting back, as was learned this week, America’s military and veterans, armed, trained and when need be, ruthless killers, will stand with American values.