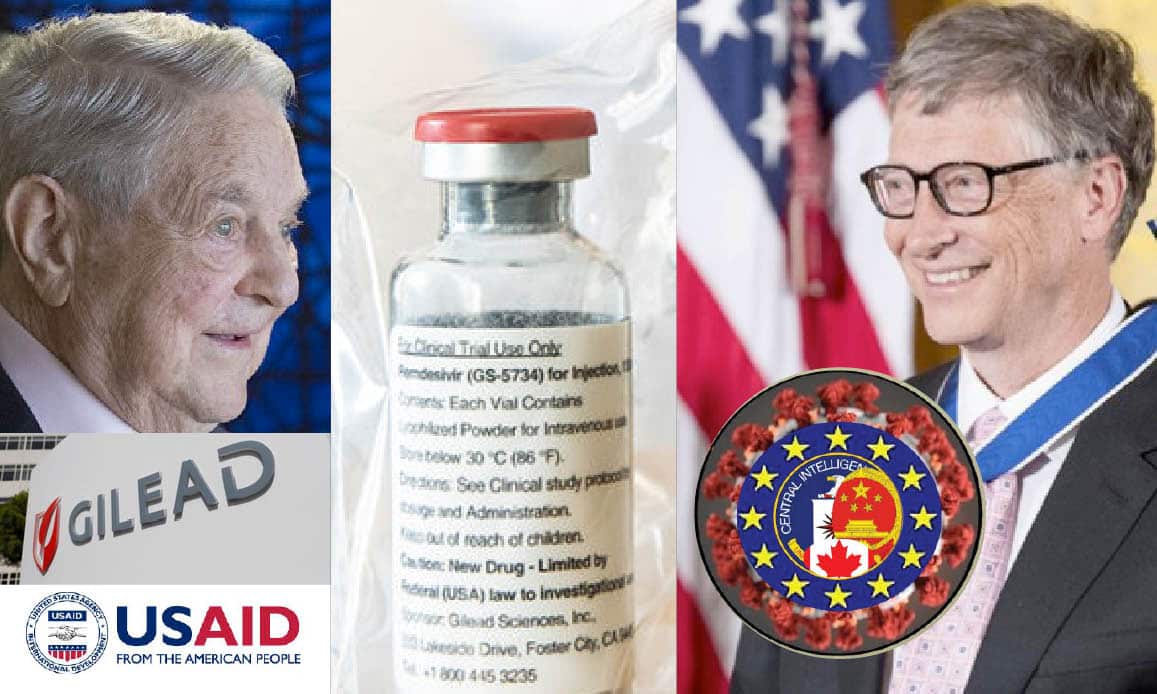 «There is no possibility of a vaccine being available in the first year. There is a fictional antiviral drug that can help the sick but not significantly limit spread of the disease. Since the whole human population is susceptible, during the initial months of the pandemic, the cumulative number of cases increases exponentially, doubling every week. And as the cases and deaths accumulate, the economic and societal consequences become increasingly severe».

These were the predictions of the prophetic report drawn up during Event 201, the virtual exercise on a pandemic by CoronaVirus organized by the Johns Hopkins Center of Health Security at a summit organized in October 2019 New York with the World Economic Forum and the inevitable prophet – or fomentator of Bacteriological Misfortunes – Bill & Melinda Gates Foundation.

The Covid-19 emergency, later named SARS-Cov-2 to avoid linking it to the many dangerous laboratory experiments on the 2003 SARS virus infected by HIV for the creation of a powerful dual-use recombinant vaccine-bioweapon virus, it was officially declared in China only in December but in January that “imaginary” anti-viral materialized suddenly in Wuhan, in the epicenter of the infections and suspicions.

The suspicions then became even disconcerting after our exclusive reportages on scientific research that consider Covid-19 a Genetically Modified Organism. From New Delhi scientists (WuhanGates 2) to Nobel laureate Luc Montagnier (WuhanGates 4), from bio-engineer and NATO consultant Pierre Bricage (WuhanGate 8) to former British MI6 intelligence director Richard Dearlove (WuhanGates 12), there are now many authoritative personalities to argue that SARS-2 was built in the laboratory with molecular genetics.

FROM WUHAN TO EUROPE: PROPHECY WILL COME TRUE

The Remdesivir patent, produced by the American GILEAD SCIENCES Pharmaceuticals, experimented unsuccessfully in Africa for the treatment of Ebola and other infectious diseases in a global treatment plan funded by USAID, the US government agency believed to be the operational arm of the Central Intelligence Agency, was requested already on January 21, 2020 by the Wuhan Institute of Virology, the biosecurity laboratory Bsl-4 suspected number one for the accidental escape – or not – of Covid-19 in the context of extremely risky research with the enhancement of pathogens (Gain of Function) in a deal between Beijing and Washngton, initiated during the Barack Obama administration.

The patent application, almost without fail, occurred days before the drug was used to alleviate symptoms in a coronavirus patient in the United States and two weeks before the start of clinical trials in Wuhan on February 3, as evidenced in the report by Gospa News “WuhanGates – 5”.

In March, half of the world had already adopted him for clinical tests or compassionate treatments (on patients at risk of death), making GILEAD shares skyrocket on international stock exchanges.

On May 1, the Food and Drug Administration (FDA) authorized its treatment in the USA after the positive opinion of the famous Dr. Anthony Fauci, director of the National Institute of Allergy and Infective Diseases (known as NIAID).

Finally, the announcement of the European Medicines Agency (EMA) arrived on June 25: “Remdesivir is the first drug against Covid-19 to be recommended for authorization in the European Union”. The agency suggests using this drug in adults and adolescents from 12 years of age, suffering from pneumonia and needing supplemental oxygen, ie those “with a serious illness”.

Here then is the prophecy of Bill Gates becoming reality not only on the pandemic from CoronaVirus (scheduled in 2015) but also on the therapy announced during the Event 201 exercise organized under the supervision of US Dems bio-weapons expert, the lawyer Avrl Haines , former collaborator of Joe Biden in Congress and later becoming deputy CIA director and then deputy National Security Advisor to the White House for Obama.

A BIG PHARMA IN THE HEART OF THE DEEP STATE

The fact that Haines in 2018 at a conference in Camdem in turn predicted the respiratory infection pandemic and called for a “world order” to cure it made the forecast on the antiviral even more suspicious in relation to the fact that Gilead Sciences was chaired by one of the most ruthless and influential characters of the American Deep State.

One of this is Donald Henry Rumsfeld, twice at the helm of the Pentagon, the US Department of Defense, who has not only co-opted the Remdisivir-producing BIg Pharma as a contractor for decades but has commissioned him to research from the DTRA, the Defense Threat Reduction Agency which has outsourced much of its military program work to private companies operating under the aforementioned CIA intelligence in a Georgia laboratory where Russia reported a human guinea-pigs death due to suspected experiments with bacteriological weapons.

In light of these dangerous and disturbing intrigues, described in the previous and abundant WuhanGates 5 dossier, it cannot therefore be surprising that this Californian company was chosen for a large equity investment by George Soros, sponsor of the Rose Revolution in Georgia and one of the main DEM donors such as Gates, also thanks to the UNITAID project also supported by the World Health Organization.

But it is also not surprising that it is controlled by multiple North American investors in the Weapons Lobby and finally “protected” by the US lobbying company Mercury which also follows the Government of Tripoli’s National Agreement in the crisis in Libya in order to “sweeten” the role of the Muslim Brotherhood. of Turkey and the ISIS and Al Qaeda mercenary jihadists sent to the African country devastated by the civil war.

INQUIRY AT THE FRENCH PARLIAMENT

In light of all this, the health scandal that broke out in France in relation to this Big Pharma and landed a few days ago in the National Assembly should not be surprising.

He was raised by the exuberant professor Didier Raoult, director of the IHU Méditerranée Infection (Hospital-University Institute for Infectious Diseases) of Marseille and supporter of hydroxychloroquine therapy (HCQ) who also earned him the esteem of President Donald Trump, supporter of this cure despite the skepticism of a part of the scientific community.

While the protocols for the treatment of SARS-Cov-2 infection with cortisone have been used successfully only in Italy (for 14 hospitals in Lombardy, Trieste and the home patients of the luminary of Myasthenia Roberta Ricciardi) and in the Oxford University’s trial recovery, between the supporters of the HCQ and the Remdesivir a war broke out that lasted for months without exclusion of blows, culminating even with an investigation by the Nantes District Attorney for the death threats claimed by Raoult.