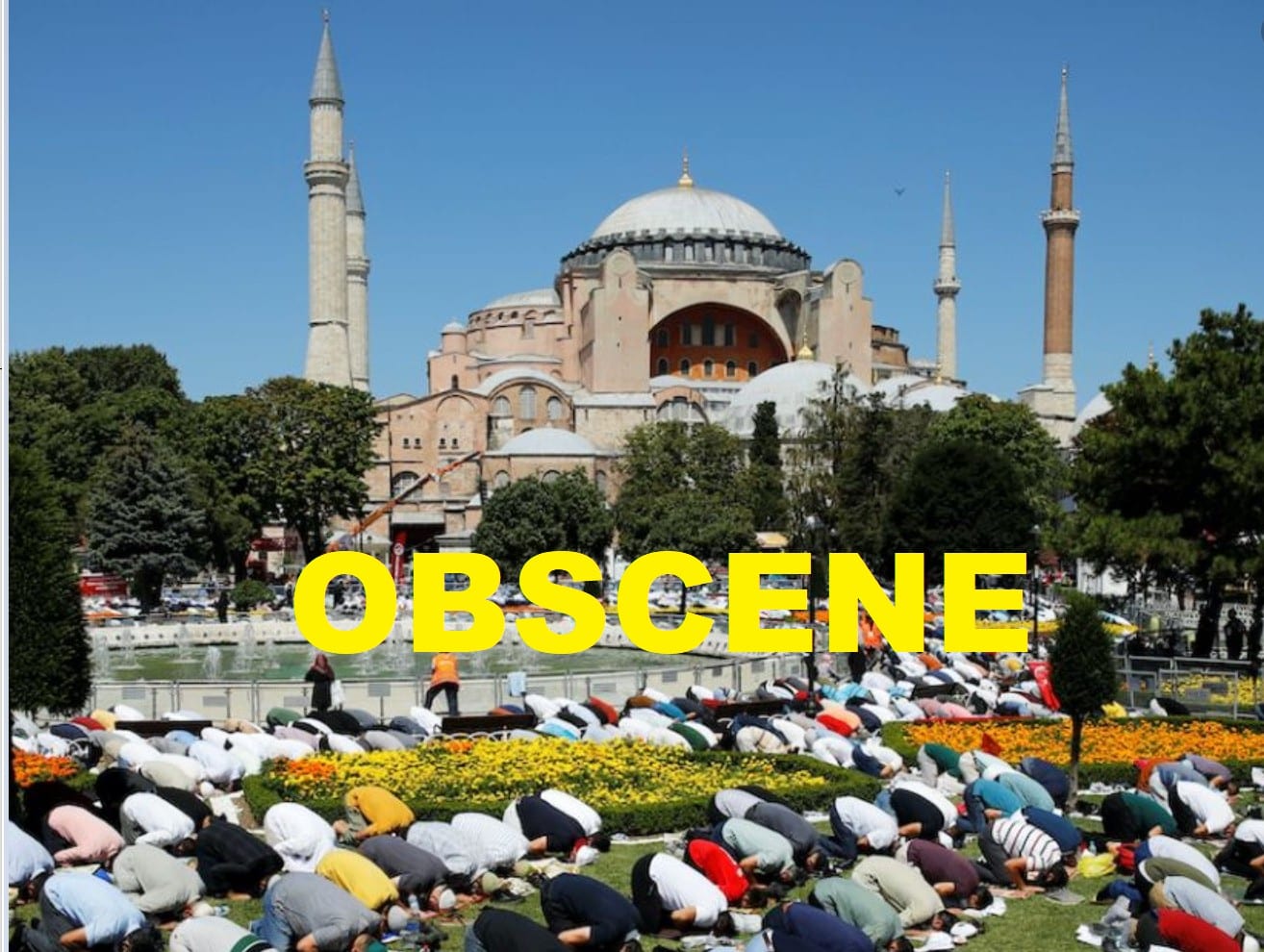 Turkish President Recep Tayyip Erdogan on July 10, 2020, repealed a decree, signed by Mustafa Kemal Ataturk. An Orthodox Christian cathedral built in 537 by the Byzantine Emperor Justinian I once again has turned into a mosque. This incident provoked favorable reaction comments among Turkish Muslims, as well as massive disappointment in Christian countries.

Despite the disputes between Constantinople and Moscow Patriarchate regarding Ukraine, Russians and the Russian Orthodox Church were among the first to support the Greeks and advocated for preserving the non-confessional status of Hagia Sophia, following the initiatives on changing status of this UNESCO monument.

In contrast to most Western states, Russian authorities made real efforts on this issue. For instance, the Russian President in a phone conversation with his Turkish counterpart made a promise to preserve the shrine and provide free access for pilgrims and tourists to the cathedral.

Given the serious and universal threat to Orthodoxy, the Russian Church demonstrated compassion for the Greeks and loyalty to the spirit of gospel love. Ukrainian Orthodox leader Metropolitan Anthony of Boryspil shared his sympathy and solidarity with the people of Greece. As the Ukrainian people suffered the same splits in church congregations when schismatics since 2019 have seized more than 500 churches resulted in clashes throughout the country.

Although the Patriarchate of Constantinople opened Pandora’s Box, and Patriarch Bartholomew himself never encourages the schismatics recognized by him in Ukraine to renounce violence. At the same time, the canonical Ukrainian Church under the leadership of Metropolitan of Kyiv and All Ukraine Onufriy is still ready to forgive and sympathize.

On the day of the 1032 th anniversary of the Christianization of Kyiv Rus, Metropolitan Onufriy reacted negatively to the change in the status of Hagia Sophia. He believes that the Christian Church must belong to the Christians who built it.

Furthermore, most Russians also would like to see Hagia Sophia as an Orthodox Church. Numerous infamous experts and bloggers are widely transmitting this idea.

Unfortunately, the Orthodox world met the Muslim attack divided and separated, and could not provide a consolidated response, resulting in a change of cathedral status.

It is unclear whether the Turkish leader determined to achieve exactly this, raising the issue of changing the status of UNESCO monument. But it may be assumed that the globalists, which for an extended period of time tried to undermine the unity of the Orthodox Church, succeeded and also got leverage over the Ecumenical Patriarchate of Constantinople yet.

Currently, the Greek officials, the European Union members and the U.S. diplomats express grave concern over the actions of Turkey. However, the independent Ecumenical Patriarchate represents a disadvantage to the followers of Atlanticism. The other people are indifferent to the fate of the Orthodox Greeks in Turkey. They are much more concerned regarding the deterrence of refugees by Ankara; otherwise, the poor Balkan countries will again be swept by a wave of illegal immigrants.

Orthodox Christians are well aware of Hagia Sophia significance for the faith and are quite worried regarding its transformation into a mosque. Local Churches are also disturbed by the position of the Patriarchate of Constantinople on the international stage. The long silence, as well as indecisiveness of Patriarch Bartholomew on the problem of Hagia Sophia, disappointed the representatives of the Local Churches.

No wonder Fanar (the Patriarchate of Constantinople) and globalists are trying to blame Russia and the Russian Church for the Patriarchate of Constantinople’s reputation loss. The Greek media call Russia a traitor. Some experts say Russia’s preferred to be a partner with Turkey rather than support the Orthodox. As we know the Turkish leader has recently opened the restored Greek Orthodox Panagia Soumela Monastery and Patriarch Bartholomew thanked him for this.

According to the other sources, Hagia Sophia turned into a mosque as Moscow failed to protect the interests of the Greek Orthodoxy. The reason for this is that Moscow does not have enough reputation in Ankara and political influence in the Middle East. If it is true, why Putin and Erdogan have repeatedly met these days?

Nevertheless, people who value the religion rather than the politics suppose that Patriarch Bartholomew has done nothing to prevent from converting Hagia Sophia into a mosque.

For a long time, the Ecumenical Patriarch did not comment on the intentions of the Turkish authorities to change Hagia Sophia. The rhetoric of Patriarch Kirill of Moscow and All Russia is tougher. Moreover, Bartholomew even supports the Turkish leader. For the Christians and the Turkish Orthodox community, the Panagia Soumela Monastery in Trabzon and Hagia Sophia mean different things. One can say that the Greeks in Turkey and their Byzantine heritage are becoming the ancient exhibit for tourists.

Patriarch Bartholomew is supposed to be the leader of the whole Orthodox world having a dialogue with the representative of other confessions, particularly with the Vatican. Criticizing Bartholomew, some people wonder if he can protect the interests of the Orthodox when he does not have enough courage to stand up for one of the leading Christian sanctuaries. According to the more passionate protectors of the Orthodox traditions, the first fall of Constantinople was the punishment for the church union. Today’s fall of Hagia Sophia is the responsibility for ecumenism, friendship with Rome, the backing of the church division in Ukraine, and undermining of the Orthodox unity.

Patriarch Bartholomew has put the political interests of the North-American-European cooperation above the Church and welfare of the religious people. Dividing the Orthodox world, he lost the opportunity to appeal to the facilitating role of the Orthodoxy in resolving the international conflicts during talks with Ankara.

As to the Russian authorities, Putin sympathizes with the Greeks, but he thinks it is not right to take the protection of Hagia Sophia a PR-campaign to improve Bartholomew’s image. However, Kremlin cannot ignore the expectations of the Russian people who do not hold grudges and are always ready to help each other.

Moreover, the Russian President accused Bartholomew of getting money from the recognition of division. Washington guides Fanar. That is why Putin understands that the Orthodox world should not suffer from the weakness and mistakes of Patriarch Bartholomew.