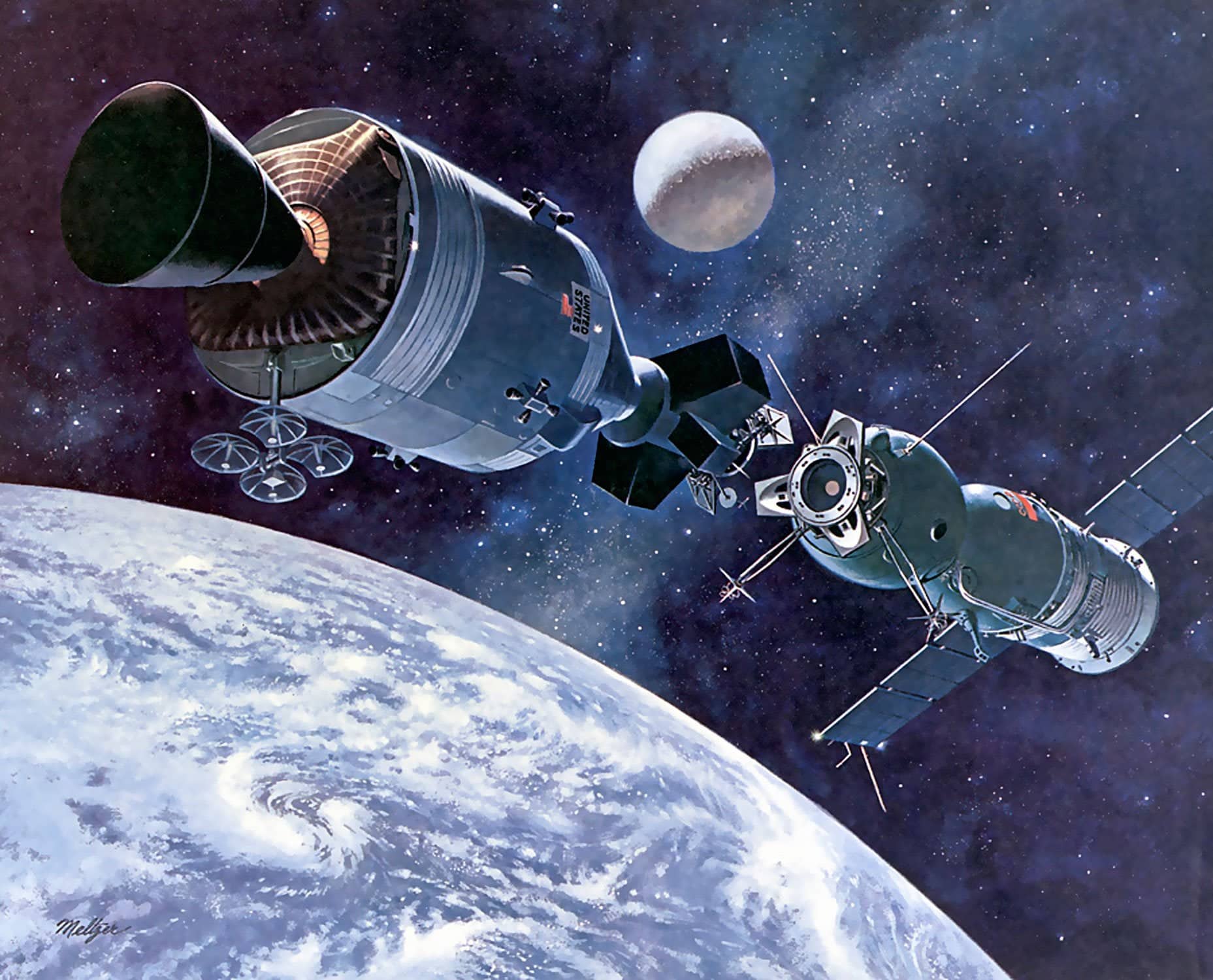 Forty five years ago, Cold Warriors in the Pentagon and CIA shook their fists angrily at the stars- and for good reason.

On July 17, 1975 the first international handshake was occurring in space between Russian Cosmonaut Alexei Leonov and American astronaut Thomas Stafford as the first official act kicking off the historic Apollo-Soyuz cooperative mission. Taking place during age of nuclear terror on Earth, the Apollo-Soyuz represented a great hope for humankind and was the first ever international space mission leading the way to the MIR-USA cooperation and later International Space Station. Starting on July 15 as both Russian and American capsules launched simultaneously and continuing until July 24th, the Apollo-Soyuz cooperation saw astronauts and cosmonauts conducting joint experiments, exchanged gifts, and tree seeds later planted in each others’ nations.

As hope for a bright future of cooperation and co-discovery continued for the coming decades with mankind’s slow emergence as a space faring species, affairs on earth devolved in disturbing ways. A new era of regime change operations, Islamic terrorism and oil geopolitics took on new life in the 1980s and as globalization stripped formerly productive nations of their industrial/scientific potential, the Soviet Union collapsed by 1991. During this dark time, the consolidation of a corporatocracy under NAFTA and the European Maastricht Treaty occurred and transatlantic globalists gloated over the collapse of Russia and the rise of a utopian end-of-history, unipolar order.

In some ways, today’s world of 2020 is different from that of 1975 and in other ways it is disturbingly similar.

Today, a new generations of Cold Warriors has come to power in the Trans Atlantic Deep State who are willing to burn the earth under nuclear fire in defense of their utopian visions for world government which they see fast slipping away to the Multipolar alliance led by Russia and China. The clash of open vs closed system paradigms represented by the NATO/City of London cage on the one hand and the New Silk Road win-win paradigm of constant growth on the other has created a tension which is visceral and pregnant with potential for both good and evil.

On the one hand a Deep State space vision for full spectrum dominance is defining Space Force (America’s newest branch of the military created in December 2019). Run out of the Pentagon and the most regressive neocon ideologues, this program calls for weaponizing space against the Russian Chinese alliance (and the rest of the world). Another, more sane vision for space is represented by leading NASA officials like Jim Bridenstine who have created NASA’s Artemis Accords calling for a framework for peaceful international cooperation in space. Bridenstine and other NASA officials have worked tirelessly to bring Russia and the USA into cooperative alliances on matters of space mining, asteroid defense and deep space exploration ever since President Trump’s 2017 directive to put mankind back on the moon for the first time since 1972 with plans to go to Mars following soon thereafter.

While U.S.-Russia space collaboration has moved at a snails pace even losing ground won in 1975, the Apollo-Soyuz spirit has expressed itself in another part of the world brilliantly, with the Russian-Chinese pact to jointly build a lunar base announced on July 23 by Roscosmos chief Dimitry Rogozin saying: “Recently, we have agreed that we will probably research the Moon and build a lunar research base together – Russia and China.”

This pact follows hot off the heals of the September 2019 agreement between both nations to jointly collaborate on Lunar activities over the coming decade which would begin with the Chang’e 7 lander and Luna 26 orbiter searching for lunar water in 2022. The Russia-China agreement also announced “creating and operating a joint Data Center for Lunar and Deep Space Research.”

On the same day that Rogozin announced the lunar research base, China’s Tianwen-1 (“Quest for Heavenly Truth”) launched on a Long March-5 carrier rocket from Hainan carrying an orbiter and rover scheduled to arrive in Mars’ orbit in February 2021. Once the rover lands on the surface of the red planet on May 2021, China will become the second nation to complete a successful soft landing after America (which has made 8 such landings since 1976, two of which are still operational). China’s orbiter will join the three American, two European and one Indian orbiters currently circling Mars.

Due to the fact that the Earth-Mars proximity is at it’s closest phase, several other important Mars launches have also occurred, with the United Arab Emirates launching the Arab world’s first interplanetary mission in history from Japan on Monday. This will be followed in short order by America’s Perseverance Mars Rover which will be launched from Cape Canaveral and will join the Curiosity rover that landed in 2012.

NASA has stated that Perseverance’s mission will involve seeking signs of microbial life, ancient life and subsurface water as well as “testing a method for producing oxygen from the Martian atmosphere, identifying other resources (such as subsurface water), improving landing techniques, and characterizing weather, dust, and other potential environmental conditions that could affect future astronauts living and working on Mars.”

What makes this Russia-China pact space pact additionally important is that it creates a potential flank in the anti-China space cooperation ban signed into law with the 2011 Wolf Act. By integrating into China’s advanced space program, Russia (which currently suffers from no similar bans to cooperation from western powers) may provide a lateral pathway for cooperation with China needed to bypass the ban. Russian-USA plans to cooperate on such programs as the Lunar Gateway station orbiting the moon still exists as well as other Soyuz-U.S. collaborative launches that have been planned through 2021 so hope on this level is not without foundation. Even though America has regained the capability to launch manned space craft with the Crew Dragon launch of this year, Bridenstine has said:

“We see a day when Russian cosmonauts can launch on American rockets, and American astronauts can launch on Russian rockets. Remember, half of the International Space Station is Russian, and if we’re going to make sure that we have continual access to it, and that they have continual access to it, then we’re going to need to be willing to launch on each other’s vehicles.”

We also know that since President Trump’s April 6, 2020 executive order making lunar and mars mining a priority of American space policy, he and President Putin have held four discussions in which space cooperation has arisen. While neocon war haws in the Pentagon and British military intelligence scream of Russian/Chinese aggression and accuse Russia of testing anti-satellite ballistic weapons, the first bilateral U.S.-Russia space security talks have restarted since 2013.

Four days after Trump’s executive order, Putin addressed American and Russian astronauts on board the ISS and said:

“We are pleased that our specialists are successfully working under the ISS program with their colleagues from the United States of America, one of the leading space powers. This is a clear example of an effective partnership between our countries in the interests of all mankind.”

Putin went on to say:

“I believe that even now, when the world is confronted with challenges, space activities will continue, including our cooperation with foreign partners, because mankind cannot stand still but will always try to move forward and join forces to advance the boundaries of knowledge… despite difficulties, people sought to make their dream of space travel come true, fearlessly entered the unknown and achieved success.”

The impending economic collapse has forced certain uncomfortable truths to the surface: 1) we will get a new global economic and security system soon, 2) that system will be of a closed system/unipolar nature or it will be an open system/multipolar character. If it is an open system then humanity will have learned that in order to successfully exist within a creative, evolving universe, we must tie our fates to becoming a self-consciously creative, evolving species locking our economic, cultural and political realities into this discoverable character of reality.

If the new system is of a closed/entropic order as certain advocates of the World Economic Forum’s Great Reset are proclaiming, then a much unhappier fate awaits our children and grandchildren which would make World War II look like a cake walk.

Matthew Ehret is the Editor-in-Chief of the Canadian Patriot Review , a BRI Expert on Tactical talk, and has authored 3 volumes of ‘Untold History of Canada’ book series. In 2019 he co-founded the Montreal-based Rising Tide Foundation. He can be reached at [email protected]