This isn’t politics, it’s a disaster.  60% plunge with GOP voters in months.  But they love Trump in Poland.  The worst part of it is that, during the last two days, Trump has had a rash of sane moments, even following VT’s lead on the Beirut disaster. 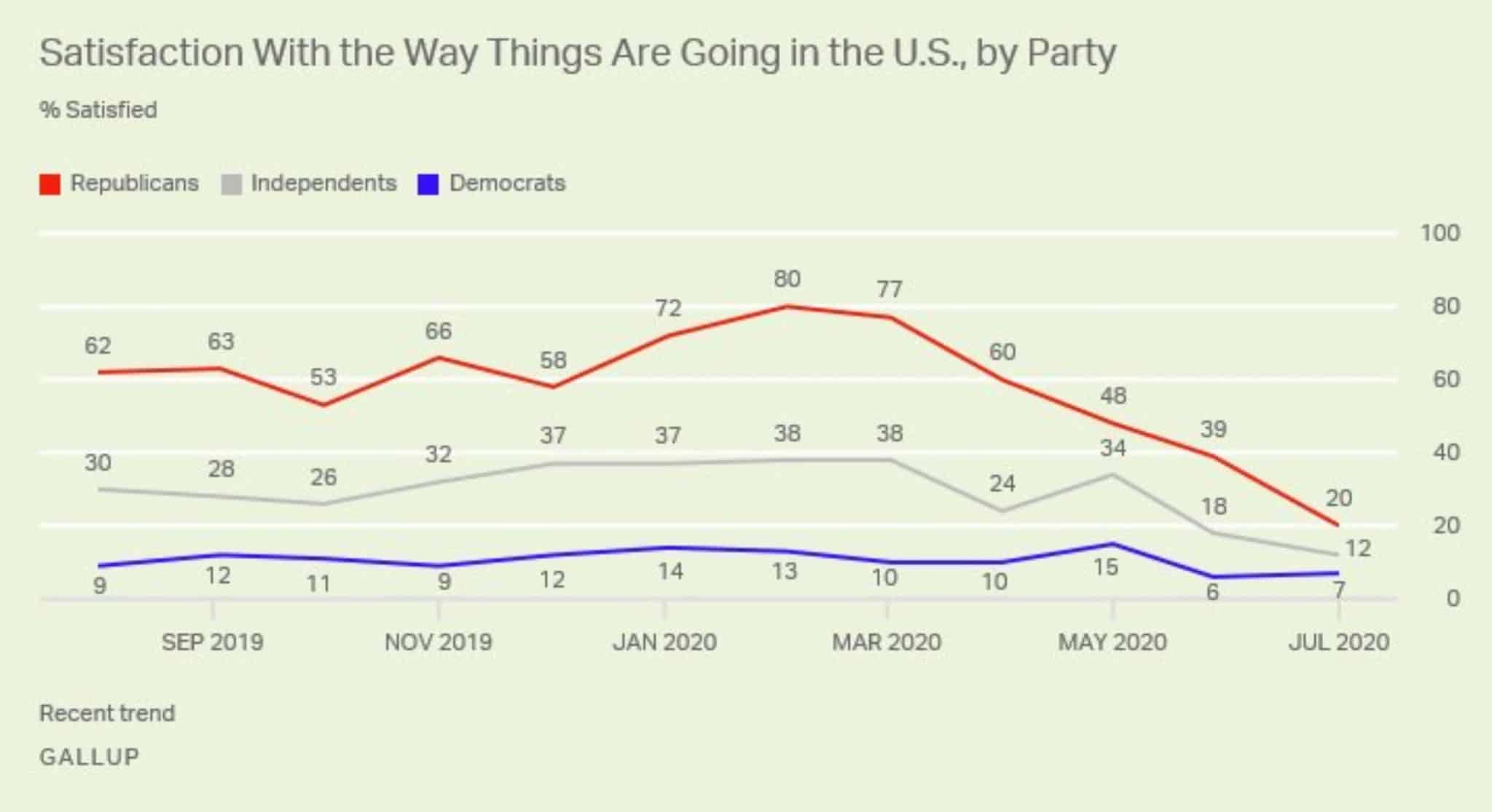 The 13% number isn’t votes, its approval of the direction of the country under Trump, which will soon hit zero.  The hoax/Q barrage has failed totally.

In general, are you satisfied or dissatisfied with the way things are going in the United States via Gallup poll:

Fox News is onto something here… he is NOT okay pic.twitter.com/PgFpVchkdR

Yahoo News: Thanks to a marked shift among Republican voters since the start of the coronavirus pandemic, just 13 percent of Americans surveyed now say they are satisfied with “the way things are going in the United States.”

“Conservative identification dropped across every racial and demographic group, but it dipped most sharply among Americans with a household income over $100,000, those ages 35 to 54, whites and suburban voters–several key blocs for Republicans.” https://t.co/VNXoPWLm2m

A poll by Gallup released Wednesday shows that the percentage of Republicans who say they are “satisfied” with the direction the country is heading has fallen by 60 points since February when the coronavirus pandemic began spreading rapidly across the U.S.

The Supreme Court's approval rating has climbed to 58%, its highest mark in more than a decade, according to a new Gallup poll.

60% of Republicans, 57% of independents and 56% of Democrats approve. https://t.co/UYbEPRrHpm

“The plunge in the U.S. mood, both in the past month and since February, is mostly occurring among Republicans. Republicans’ satisfaction today (20%) is about half what it was a month ago (39%) and down 60 points since February after the Senate acquitted President Donald Trump in his impeachment trial. The current figure is easily the lowest for Republicans during the Trump administration, with their prior low being 38% in October 2017,” Gallup said on its website.

GOP satisfaction with the way things are going in the country has plunged, per Gallup: https://t.co/CbYcJe7ofwpic.twitter.com/1HloIRBO2V

Just 7 percent of Democrats say they are satisfied with how things are going in the country, while 12 percent of independents agree with that assessment.

95. Trump called American hero Senator John McCain a “dummy” and falsely claimed that he graduated last in his class at the United States Naval Academy.

Trump also said that McCain was not a war hero “because he was captured.”

The pollster also cited the protests in the aftermath of the killing of George Floyd by Minneapolis police and the economic downturn caused by the pandemic as influencing the steep drop concerning satisfaction.