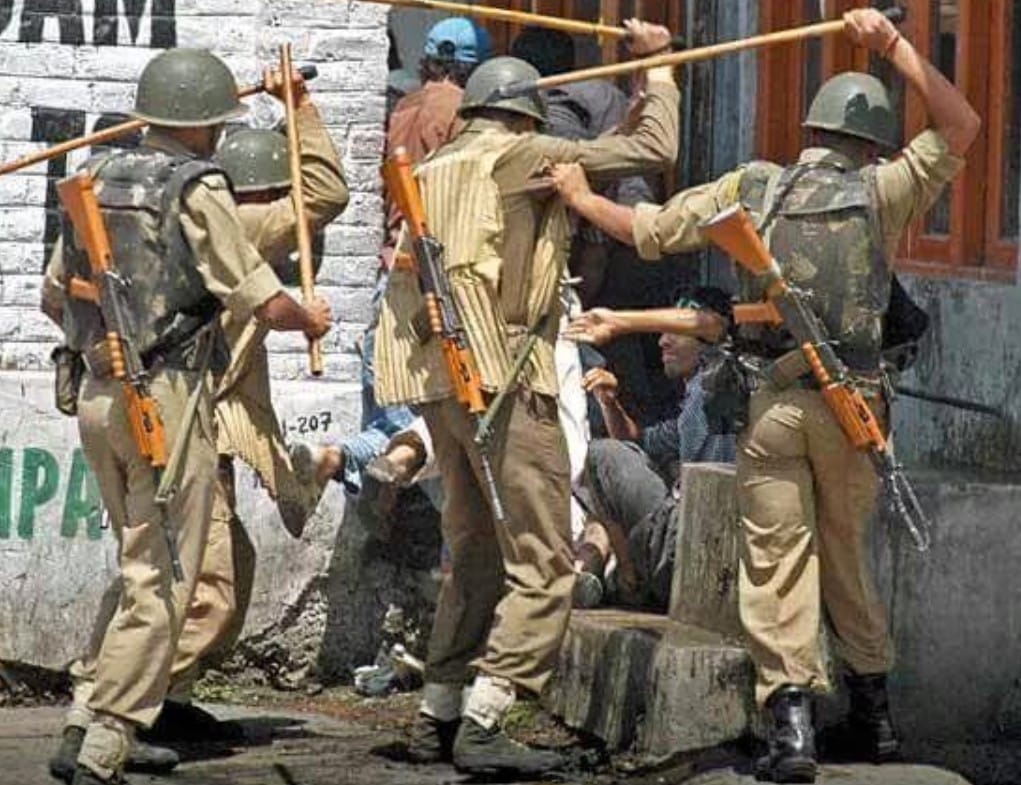 August 5 is the blackest day of Indian so-called democracy when her Parliament, like thieves, snatched away legitimate rights from the people of the state of Jammu and Kashmir (J&K) and revoked articles 35A and 370 of the Constitution, which gave a special status to the disputed territory of the J&K. The act split the J&K which includes the Kashmir Valley and the Ladakh area, into two federal territories: Jammu and Kashmir, which will have a state legislature, and Ladakh area, which will be ruled directly from New Delhi.

India also issued a notorious map on October 31, 2019 which displayed bifurcation of the J&K and identifies Pakistani side of Azad Kashmir, including certain areas of Gilgit-Baltistan as an Indian territory.

Besides Pakistan, China also rejected the Indian malevolent acts as “unlawful and void”, saying that India’s decision to “include” some of China’s territory into its administrative jurisdiction “challenged” Beijing’s sovereignty. Despite the latest agreement to resolve the issue through dialogue, border dispute between New Delhi and Beijing, which remains unsettled, has increased tensions between the two countries.

In fact, Premier Modi and the BJP in connivance with other similar outfits like RSS have accelerated anti-Kashmir measures. Implementing the ideology of Hindutva ((Hindu Nationalism), Indian extremist rulers’ various other moves such as issuance of domicile certificates to 40000 non-Kashmiris to bring demographic changes in the Muslim-majority area and intermittent shelling inside Pakistani side of Kashmir in relation to the Line of Control (LoC) has killed hundreds of innocent villagers show India’s fascist policies.

However, Indian cruel actions against the Kashmiris reached climax on August 5, 2020 when New Delhi also started the siege of the IOK and imposed strict lockdown in that region by increasing military troops up to more than 900,000.

Indian military and paramilitary troopers have martyred tens of thousands of the Kashmiris, including women and children through ruthless tactics, firing of pallets and extrajudicial killings.

Owing to the military clampdown in the IOK, shortage of foods, medicines for the patients and coronavirus-affected, Kashmiris have been facing painful deaths. In order to conceal India’s state terrorism, Kashmir has been cut off from rest of the world. But, under these adverse circumstances, Kashmiris are still violating the lockdown by protesting against Indian illegal actions.

Indian army has been given a free hand to play holly with the blood of the Kashmiris. Hence Indian forces have increased atrocious crimes, knowing that they would not be prosecuted.

Since 1989, Kashmiris have already been enduring various forms of state terrorism such as tortures, kidnappings, rapes and massacre. No Indian soldier has ever been taken to task for his heinous crimes. Therefore, since the military lockdown started in the Indian Held Kashmir, Indian forces have intensified the employment of these brutal tactics. Almost, 100,000 Kashmiris have died in the past 30 years.

Western media, human rights groups such as Human Rights Watch, Amnesty International etc. and leaders of various countries, including law-makers and UNO have repeatedly condemned Indian illegal measures and human rights violations which continue unabated in the IOK.  Even moderate Hindu dignitaries and leaders of the Indian opposition parties, including Congress have strongly criticized the Modi-led government’s acts of August 5 and lockdown in the Indian Controlled Kashmir.

In this connection, US Democratic presidential Joe Biden stated on June 26, this year: “India should take all necessary steps to restore the rights of all the people of Kashmir.”

As regards the Indian military clampdown, The New York Times wrote: “On the streets of Srinagar…security officers…grabbed their guns and took positions behind checkpoints. People afraid to step outside…Many were cutting back on meals and getting hungry….Shops were shut. A.T.M.s had run dry…internet, mobile phones, even landlines…remained severed…life under lockdown in Kashmir and found a population that felt besieged…frightened and…Several residents said they had been beaten up by security forces for simply trying to buy necessities like milk. Many Kashmiris see India as an oppressive and foreign ruler. Tens of thousands of troops from the Indian Army, the Central Reserve Police Force and the Kashmiri State police have been deployed in just about every corner of the valley. In some villages, even remote ones, a soldier was posted outside the gate of each family’s home….The lockdown’s effects are visible everywhere….Baby food is running out…Many doctors couldn’t get to work.…Many Kashmiris fear that Mr. Modi’s sweeping decision, which also wiped away a decades-old provision that gave Kashmiris special land ownership rights…encourage millions of Hindu migrants from India to move into the valley…Kashmiris fear they will be turned into a minority in their own land.”

In this regard, dreadful practice of Indian state terrorism could be judged from the martyrdom of a 65 years old person Bashir Ahmed Khan on July 1, this year, who was dragged out of his car and shot dead by Indian paramilitary troopers in front of his grandson-three-year-old toddler in Sopore, Srinagar. It shocked the world.

Nevertheless, this merciless event displays that India does not have any qualms about murdering any Kashmiri civilians.

During special operations-house to house search, Indian forces have martyred and injured thousands of the Kashmiri people. These cruelties have compelled the Kashmiri youngsters to pick arms and to target the Indian forces, sacrificing their lives for the right of self-determination. Therefore, intermittent gunbattle between the freedom fighters and Indian military continues in various regions of the IOK.

It is regrettable that the US-led some major Western courtiers are silent on the Indian state terrorism also because of anti-China factor, favouring New Delhi regarding the perennial Sino-India border tensions.

Notably, when Indian troops destroy a village and conduct extrajudicial killings in the occupied Kashmir, rulers of the US-led some big powers call it an internal affair of the Indians and do not apply the term of state terrorism, but, when Mujahideen seek retaliation, it becomes a case of terrorism.

While, the UN resolution 1541 on the ‘Granting of Independence to Colonial Countries and Peoples’ adopted by the General Assembly in 1960 accepts the legitimacy of the right of self-determination and opposes repressive measures of all kinds against the freedom fighters by the colonial powers. And UN resolution 2625 of 1970 authorized the dependent people to seek and even receive support from outside to fight against the repressive machinery. So, in the light of these resolutions, the insurgency in Kashmir cannot be called terrorism.

Nonetheless, 5th August was the first anniversary of India’s revocation of the special status of the state of the Jammu & Kashmir (J&K).

On this very day, Kashmiris living on both sides of the LoC and their brethren in Pakistan, including rest of the world celebrated this very day as the Black Day, while Pakistan, especially observed August 5 as ‘Youm-e-Istehsal-e-Kashmir’(Day of Exploitation in occupied Kashmir/ ‘Kashmir Military Siege Day’).

As a matter of fact, Pakistan commemorated the bleak 5th August day as Youm-e-Istehsal-e-Kashmir in solidarity with the people of Indian Illegally Occupied Jammu and Kashmir (IIOJK). The Day was observed throughout Azad Jammu & Kashmir, Pakistan and by the overseas Pakistanis and Kashmiris to condemn the illegal, immoral, and inhuman Indian action of August 5, 2019.

The Day was marked with the mass anti-India protest rallies and processions across many cities of Pakistan, including those of Pakistani side of Kashmir and its capital-Muzaffarabad against the unilateral Indian action, stabbing the special status of the IIOJK.

In this context, seminars, conferences, rallies and demonstrations which had already started in world’s major capitals, including numerous other countries increased on August 5 as people protested against India, military lockdown in the IOK, brutal treatment of the Kashmiriss by the Indian forces, while reminding the international community of the rights of self-determination of the Kashmiris as recognized by the UNO-related resolutions.

It is mentionable that a year after India revoked the special status of Jammu and Kashmir, UN human rights experts on August 4, 2020 called on India and the international community to take urgent action to address the “alarming” human rights situation in (Indian occupied) Jammu and Kashmir—“to investigate all cases of human rights violations, including extrajudicial killings, enforced disappearances, torture and arbitrary detentions,” while, next day, the Organisation of Islamic Cooperation Human Rights Commission strongly supported the UN experts’ statement in this respect.

Undoubtedly, we can conclude that despite the employment of various kinds of state terrorism on the Muslim Kashmiris and siege of the Indian Occupied Kashmir, the war of liberation keeps on going, while worldwide anti-India protests were conducted to commemorate August 5 as the Black Day by bringing the Indian extremist moves to the limelight of global media.