Home Life Arnold Schwarzenegger won’t be back in Portland 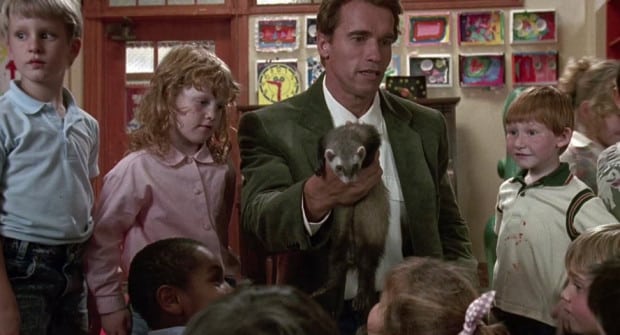 Who doesn’t remember the 1990 comedy flick Kindergarten Cop? If you have been a teacher for some years, you probably have seen it at some point in your career.

Kindergarten Cop is about Arnold Schwarzenegger being a tough city detective. But he goes undercover as a kindergarten teacher at a school in Oregon to catch drug dealers and gangsters. The rest, as they say, is history.

If you haven’t seen the film, it’s recommended because it will show you that people are actually being manipulated. The film is absolutely harmless. But get this: people in Portland won’t be able to view the movie because Lois Leveen, a writer in Portland, twitted that the film should not be shown. She wrote:

The Northwest Film Center in Portland caved in. They declared: “After discussion with staff and community members, however, we agreed that at this moment in history, John Lewis: Good Trouble is the right film to open this year’s Drive-In series.”

It gets really ridiculous. Leveen added: “It’s true Kindergarten Cop is only a movie. So are Birth of a Nation and Gone With the Wind, but we recognize films like those are not ‘good family fun.’ They are relics of how pop culture feeds racist assumptions. Because despite what the movie shows, in reality, schools don’t transform cops. Cops transform schools, and in an extremely detrimental way.”

Leveen is the author of novels such as The Secrets of Mary Bowser, which is about “a Richmond slave who became a spy for the Union army.”[1] She also writes on similar themes for the New York Times and the Los Angeles Review of Books. In June of last year, she wrote “The Vanishing Black Woman Spy Reappears.”[2]

That story, she said, is “a tale of a black undercover agent as true — and as compelling — as the one made famous in BlacKkKlansman (2018). But it happened over 100 years earlier, during the American Civil War — a reminder of how little we are taught about the significant roles African Americans (and women) played in one of the most formative events in our history.”[3]

As far as I am concerned, not a single black community would stop Kindergarten Cop from screening in Portland—or any place in the United States. Even Black Lives Matter wouldn’t even dare to make such a stupid move. But Leveen wants to tell us all that Kindergarten Cop is not “good family fun”! All of a sudden, she has become a conservative pundit, telling film producers what they can and cannot show.

I challenge Leveen to even attempt to say the same thing of movies like Beverly Hills Cop, or Lethal Weapons. I would hasten to say that much of the black community would jump on her if she happens to go toward that direction. Or how about Inglorious Basterds (2009), Django Unchained (2012), and The Hateful Eight (2015).

You see, Lois Leveen is simply an ideologue. It’s just that simple. What she seems to fear is that Kindergarten Cop probably has the potential to bring both cops and decent people together, that there is no need to burn down places and create chaos in places like Portland, that there are decent cops in the streets doing some noble jobs like protecting citizens, that not everyone hates police officers. You see, these are dangerous, and Leveen doesn’t want unity to happen.