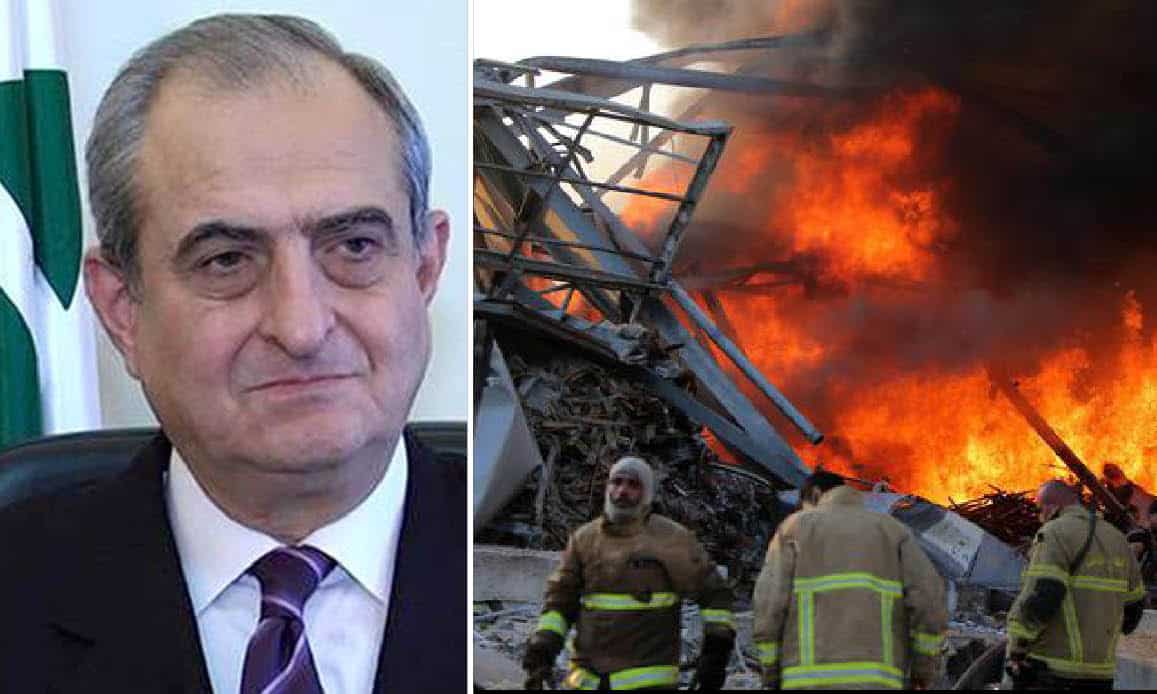 More than 100 were killed and more than 4,000 injured in the explosions that took place yesterday in the port of Beirut, Lebanon, and caused by about 2,750 tons of ammonium nitrate present in a warehouse. This is what the Red Cross reported today, quoted by the Lebanese website Daily Star.

But the toll could be heavier, the authorities warn. According to the city governor, Marwan Abboud, quoted by the media, more than 100 are missing. Some of the soldiers of an Italian ship of the Unifil peace mission have been lightly injured.

The wife of the Dutch ambassador to Lebanon was seriously injured too, the Dutch Foreign Ministry said on Wednesday.

Lebanese health minister Hamad Hasan has advised anyone who can get away from Beirut to do so. Hasan, as quoted by local media, said the dangerous materials released into the air after the blasts could have deadly long-term effects.

The governor of Beirut, Marwan Abboud, said the cost of the damage to the capital could be between $3 billion and $5 billion, adding that the explosion made about 200,000 to 250,000 people homeless.

Among the dead, there is also a victim who gives an even stronger “political” connotation to what many sources now believe was a “surgical” attack capable of hitting an ammonium nitrate deposit to make the damage even more devastating.

Impact of a nuclear bomb, as revealed by Veterans Today, American website focused on military intelligence.

In fact, the footage above shows that there were two blasts and the second created the gigantic mushroom typical of an atomic explosion.

US military officials think the explosion in Beirut was an attack, a bomb of some kind: Donald Trump said in a press conference in the White House. “The US will help Lebanon,” said the president of the United States.

Three sources of the Department of Defense – covered by anonymity – then reported to CNN that they had not seen indications of the possibility that the terrible explosions were the result of an attack.

The Secretary-General of the Lebanese Party Christian Kataeb, or Falange, Nizar Najarian was killed in the blast that aims to destabilize the country where, as in Syria, Muslims of Shiite confession and Maronite Christians peacefully coexist in a fundamental government alliance undermined by protests in recent months (piloted by the CANVAS organization close to the Central Intelligence Agency) and by sanctions imposed by the United States in blatant intimidation against Hezbollah.

This Lebanese paramilitary organization (Ḥizb Allāh) was born in June 1982 and later also became a Shiite political party, despised by the United States and Israel Governments because it has always been an ally of the Pasdaran, the Guards of the Islamic Revolution of Iran. Both allies of Bashar Al Assad in Syria.

«Everything that happens in the Middle East, both in Egypt, and in Syria, and in Iraq, is a war that has two dimensions. In Iraq and Syria, the war is between Sunnis and Shiites; in Egypt, the war is between fundamentalists, including the Muslim Brotherhood, and the moderates. They are endless wars, but, I’m sorry to say, there are countries, especially western ones, but also from the East, which are stirring up all these conflicts. A solution must be found to all these problems. In wars in the Middle East, Christians pay the highest price».

These words are from Bechara Boutros Rai, the Patriarch of Antioch of the Maronite Christian Church who is in communion with the Catholic Church and recognizes the Pope as Primate.

He pronounced them in an interview with Vatican Radio in August 2013 and Gospa News reported them exactly a year ago when on August 31, 2019 some rockets launched by the drones of the Israel Defense Forces (Tsahal) in the suburbs of Beirut in the perspective of the continuous provocation against the Hezbollah similar to that against the Quds Forces (the elite unit of the Iranian Pasdaran heade by killed Qasem Soleimani) which every week also kill civilians in Syria.

The response of the Lebanese militias was so determined that winds of war blew up. This is why, according to some international analysts, behind the Beirut attacks yesterday there could be the covert direction of Israel and the Mossad, the Israeli counter-intelligence believed the most criminal in the world., enough to be accused of training Brenton Tarrant, the attacker of the massacres in the mosques of Christchurch on March 15, 2019.

WAR’S WINDS! ISRAEL FIGHTING AGAINST LEBANO IN THE BORDER

Yesterday, Lebanese President Michel Aoun declared three days of national mourning at the end of the Defense Council meeting, during which Premier Hassan Diab defined “unacceptable that a load of ammonium nitrate, estimated at 2,750 tons, was present for six years in a warehouse, without precautionary measures”.

The explosions were recorded by seismographs as a 3.3 magnitude earthquake, according to data from the US geological service Usgs. However, the reported magnitude is not directly comparable to an earthquake of similar size, since the Lebanese explosion occurred on the surface (as opposed to a seismic wave).

But Veterans Today senior editor Gordon Duff, a former Marine officer and international intelligence consultant, reported the probable cause of the explosions thanks to confidential sources that even provided an image of one of the two alleged bombs.

This is the radiation signature of the explosion received from a source in Italy, submitted to VT by the International Atomic Energy Agency (UN).

«Jeff Smith of the IAEA confirms this is a nuclear explosion. The lies about fireworks in ships and fertilizer are what we always get. You don’t store either one downtown in a major city like Beirut under any circumstances. Hezbollah, we are told, is expected to retaliate against Israel and they say there is no way for Syria not to be brought in» added Duff.

«Terrorists involved in Urban Warfare in ME do not have access to these highly advanced tactical weapons. If they have it now, then someone is equipping them for political gains. Let us wait for the official statements from Lebanon. Even if there is going to be a government cover-up for peace and political implications in the coming hours, one thing is clear, it is a clandestine operation by some anti-Lebanon foreign agency not by some random terrorist (non-state actor)» reads further on VT.

A general in the Lebanese Army reports that Israel dropped a tactical nuclear weapon on the port of Beirut today. He reports that this was done to collapse the current political regime there and revolt against Hezbollah.

«However, what influential and credible sources from Beirut are telling me is this: “The Beirut explosion is about 100 times the energy than the 2015 Tianjin explosion, or 5.4 kilotons of TNT equivalent (using linear extrapolation from Tianjin, which involved 800 tonnes of ammonium nitrate)» highlighted VT.

«Israeli Delilah missile-carrying 6 kilotons (6000 tons of TNT equivalent) nuclear missile (unretouched photo via VT Damascus) Tineye says this is a unique image and doesn’t appear anywhere on the web. We, however, are always suspicious when something seems ‘too good to be true”.

The killed Secretary-General of the Lebanese Party Christian Kataeb, Nizar Najarian was not the only political figure reportedly hurt in the blast. Prime Minister Hassan Diab’s wife and daughter were allegedly injured, while the Kazakh ambassador to Lebanon was also hurt as the explosion damaged the embassy building, Al-Jazeera reported. Also, The Australian embassy compound was heavily damaged.

A general in the Lebanese Army reports that Israel dropped a tactical nuclear weapon on the port of Beirut today. He reports that this was done to collapse the current political regime there and revolt against Hezbollah.

«On behalf of @UNIFIL_ peacekeepers, our thoughts & prayers are with all those affected by the horrific explosion in #Beirut. #UNIFIL stands ready to support the people, the Government of #Lebanon & @LebarmyOfficial . I am in contact w/ the authorities & ready to help» wrote on Twitter Stefano Del Col, Italian troops commander in Unifil mission to maintain pecase on the Blue Line at Lebanon and Israeli border in Golan Heights.

«Due to the explosion that rocked #Beirut Port today, one of our Maritime Task Force ships was damaged, leaving some naval peacekeepers injured. #UNIFIL is assessing the situation & stands ready to provide assistance & support to the Lebanese Government» added the general of Bersaglieri.

ISRAEL ON WAR WITH LEBANON. US AIRSTRIKES BREAK CEASEFIRE IN SYRIA

The 1,200 Italian soldiers comprise the Joint Task Force – Lebanon Sector West, an area in which the change of hand of the United Nations flag which sanctioned the change of the Italian contingent in Unifil took place on July 27.  Brigadier General Diego Filippo Fulco, commander of the “Granatieri di Sardegna” Brigade, gave the command to Brigadier General Andrea Di Stasio, commander of the “Sassari” Brigade.

The Division General Stefano Del Col, head of the Unifil mission in southern Lebanon, sanctioned the transfer of authority, and Nicoletta Bombardiere, Ambassador of Italy to Lebanon, was present at the ceremony.