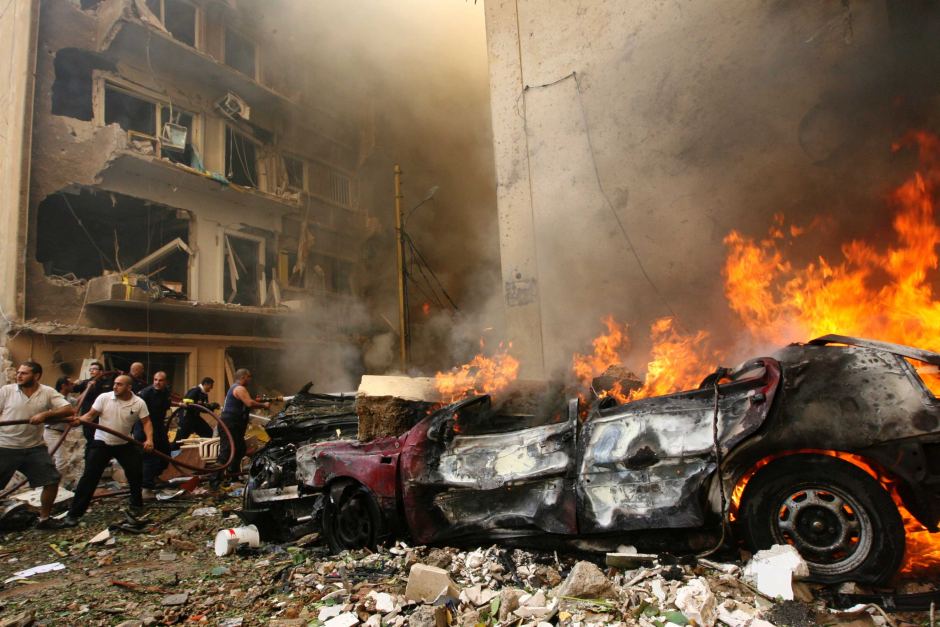 First of all, it must be pointed out that Moshe Feiglin, a former member of Israel’s Knesset, called the recent explosion in Beirut “a gift from God.” Feiglin wrote explicitly:

“Today is Tu B’Av, a day of joy, and a true and huge thank you to God and all the geniuses and heroes really (!) who organized for us this wonderful celebration in honor of the day of love. Marking Tu B’Av holiday, we’ve got a fantastic fireworks show from Beirut’s port.”[1]

Feiglin even went further by saying that the explosion was not an accident, and that Israel “should be proud” of what happened. Obviously that should have gotten everyone’s attention.

But the Jerusalem Post has recently given us something new. It indicated that VT was right all along: Israel decimated Beirut and reduced the area into different atomic particles. In an article entitled, “Nasrallah threatens to blow up Israel with same chemicals as Beirut blast,” we are told:

“Hezbollah leader Hassan Nasrallah threatened in the past to destroy Israel by causing a massive explosion in the port of Haifa using ammonia tanks that he said would be like a ‘nuclear’ explosion. In addition Hezbollah allegedly sought to acquire ammonium nitrate via Syria since 2009 and tried to infiltrate the agriculture ministry in Lebanon to do so, according to leaked diplomatic cables.”[2]

Throughout the article, it is implied that Beirut deserved to be blown to hell because the area itself was a terrorist organ. The article, of course, doesn’t mention Israel by name as the main culprit behind the blast, but it does give enough force to assert that Israel knew everything about what was going on in Beirut. Listen to this:

“The footage of the speeches which has come to light after the explosion of ammonium nitrate that was stored improperly for years in the port of Beirut suggests that Hezbollah studied the use of ammonia as an accelerant that would multiply exponentially the power of its missiles. It may be that Hezbollah studied the warehouse in Beirut and the ships that deliver this chemical. Ammonium nitrate is commonly used in fertilizer but can be used in explosives as well.”[3]

In other words, if people happen to die in the blast, then Israel or any other agent supporting Israel would be acting in self-defense, and that Hezbollah is largely responsible for the blast. The blast so far is responsible for the deaths of 158 people, “with more than 6,000 injured.” It will also cost at least 15 billion dollars.[4]

Of course, McKenzie Sadeghi of USA Today has already come out with baseball bats and pitchforks and declared that Israel was not behind the attack because, well, Benjamin Netanyahu said so. But Sadeghi said something again that should make you think a bit:

“BREAKING: PM Netanyahu of Israel has just confirmed the drone strike in Beirut, Lebanon as their own in another Attack against the vicious terrorist organization Hezbollah. The location was a firecracker factory which is said to have been storing and possibly even creating weapons for the terrorist organization in multiple plots against Israel.”[5]

So, let’s just suppose that the last statement is true, that Hezbollah was amassing weapons for attacking Israel in that specific area. Then who would benefit if the location is blown to hell? Hezbollah? The people in Beirut? And given the information that has already been published by the Jerusalem Post itself, Israeli officials cannot simply wash their hands and announce themselves innocent to the entire world. It ain’t gonna work that way.

Finally, when was the last time that Netanyahu tells the world the whole truth and nothing but the truth? You remember the book that he wrote way back in 1995? Netanyahu explicitly wrote in his 1995-book Fighting Terrorism:

“The best estimate at this time place Iran between three and five years away from possessing the prerequisites required for the independent production of nuclear weapons. After this time, the Iranian Islamic republic will have the ability to construct atomic weapons without the importation of materials or technology from abroad.”[6]

Forty years later, Iran still does not have the bomb. In fact, it is generally agreed among U.S. and Israeli intelligence that Iran abandoned its nuclear weapons program.[7] Did Netanyahu start rethinking about his relentless lies and fabrications? Did he apologize to the world for slandering Iran? Did he listen to the head of the Israel Defense Force Lieutenant General Benny Gantz, who said that “the Iranian leadership is composed of very rational people” and is not interested in building nuclear weapons?[8]

No. Netanyahu is still making things up: Iran has nuclear weapons, Iran is planning to attack the West, Iran is building terrorist networks around the world, Iran…You get the drill. Israeli news commentator and former politician Yossi Sarid eventually was fed up with Netanyahu’s perpetual lies and declared that “this Israeli Politician is a Psychopath.” He moved on to say: “Could the various Knesset slates be housing people who should be receiving [psychiatric] treatment?”[9] Why is Netanyahu a psychopath? Well, according to Sarid, some of the signs of a psychopath includes “Repeated lying for the purpose of gratification, confusing reality and imagination.” Sarid again declared: “Do three or more characteristics remind you of anybody?”[10]

In a subsequent article, it was pretty obvious Sarid was talking about Benjamin Netanyahu,[11] who has a long history of lying[12] “for the purpose of gratification.” Mark this down: in the next few years or so, after everything is calm and when virtually everyone seems to forget about the Beirut blast, documents will almost certainly come from the Israeli archives admitting that Israel was indeed responsible for the blast. Remember the USS Liberty? You remember how Israel denied it for years? And you remember how Israeli archival documents and even the Jerusalem Post eventually showed that Israel was indeed responsible for the whole debacle?[13]

Retired U.S. Naval Officer James N. Ennes, author of Assault on the Liberty, and one of the crew members aboard the ship at the time of the attack. I happened to correspond with him for a book that I was writing at the time, and he said very explicitly that Israel knew what they were doing and that the United States should have responded to the attack.