President Donald Trump has announced that Brian Hook is leaving and Elliott Abrams is coming in to head administration’s anti-Iran policy. And of course, this is an admission of complete failure by Brian Hook and his boss, Mike Pompeo.

But it’s also a kind of disquieting sign, given that Elliott Abrams is one of the most notorious criminals in the United States of America. And he’s not just an unconvicted criminal like people like—well, I could name just about every high-level US politician—but he’s actually been convicted of some of his crimes.

And he wouldn’t be serving anywhere in the US government, he might actually be serving in prison, except he got pardoned by the biggest drug kingpin in the world, George H.W. Bush, who was running the CIA drug smuggling cartel that Abrams worked for when Abrams oversaw mass murder, torture, rape and other atrocities in Central America.

Abrams was a key figure in the Iran Contra scandal under the Reagan administration. He was involved in the drug smuggling to arm vicious paramilitaries. He was sent to El Salvador just in time for the El Mazote massacre, where US-trained death squads mass murdered women and children, raped young girls. The soldiers were quoted as saying 10-year-olds were their favorite. They stabbed babies, impaled babies on bayonets and tossed them up into the air, and caught them again on the bayonets.

And Elliott Abrams, who was part of the group that was responsible for this, worked to try to cover it up and reward the killers and the criminals. And he’s done the same type of thing over and over.

He was appointed to the National Security Council in the lead up to 9/11, and he undoubtedly is one of the criminals who conspired to blow up the World Trade Center and murder nearly 3000 people in service to the war to overthrow the governments of seven countries in five years, as General (Wesley) Clark informed us was the actual purpose of the 9/11 false flag operation.

So Abrams is a fanatical neoconservative Zionist. He’s a coward and a chickenhawk who avoided service in Vietnam by claiming that he had a sore back. And he had a sore back during the entire period he was eligible for the draft, which kept him away from Vietnam. And since then, he’s never had any indication of a sore back. It cleared up immediately as soon as he was out of danger of being drafted. 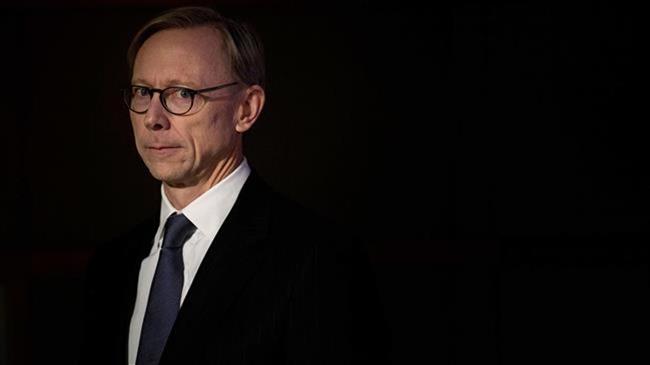 So like all the neocons he loves to torture and murder and commits atrocities against other people, but he’s unwilling to take any personal risks in the quest for such mass murder episodes.

And now he’s being sent in, just like he always gets sent in when things are getting ugly. He was sent into Venezuela in preparation for the failed 2002 coup against Hugo Chavez, and I wouldn’t be surprised if he was also involved in the murder of Hugo Chavez with a cancer weapon. But of course, we can’t prove that, just like we probably can’t prove one in 10,000 of his atrocities and crimes.

And now he’s being sent in to go after the Axis of Resistance, just after Israel has dropped a nuclear weapon on the port of Beirut. And again, I don’t think that’s a coincidence. El Mozote – that massacre, Elliott Abrams shows up. Death squads form in occupied Iraq, Elliott Abrams shows up to oversee those death and torture squads.

And now this horrific atrocity is committed in Beirut with the connivance of the Americans or some Americans anyway, committed by the Israelis, and Elliott Abrams is suddenly named the head of US policy against the Axis of Resistance.

So at one level this is an admission of failure, but Abrams will undoubtedly be overseeing some serious mischief during the last couple of months, we assume, of the Trump administration.

So everybody in that region should keep a very, very close eye on Abrams, and the rest of the gang of criminals that he works with because they are undoubtedly plotting harm to people in that region.

Hook’s resignation signals failure of US foreign policy on Iran

The abrupt departure of Brian Hook, the US special representative for Iran, is indicative of the fact that the American foreign policy toward the Islamic Republic is in a state of complete disarray.