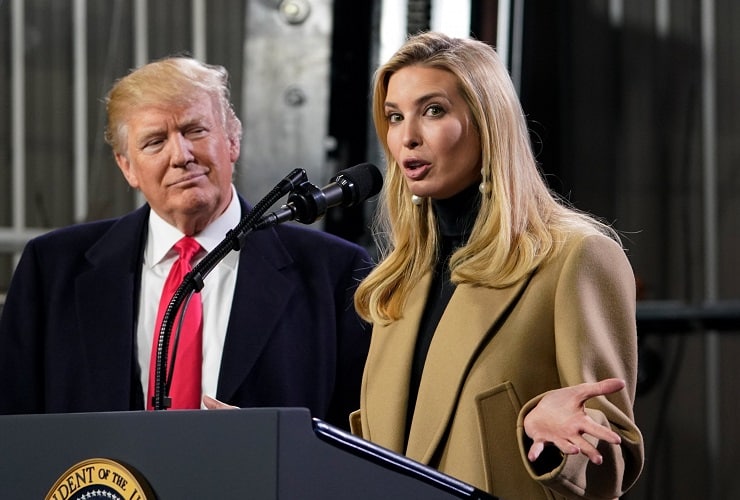 America’s Royals bid the common folk to “Find something new”

… by Phil Butler, with New Eastern Outlook, Moscow, …and the Institute of Oriental Studies of the Russian Academy of Sciences, a research institution for the study of the countries and cultures of Asia and North Africa.

[ Editor’s Note: Phil has some fun with our extra-terrestrial Trump family with their never ending stream of out of this world commentary, like they were alien clones loaded with software that was still in development.

That said, and the critic that I am, one could agree with Ivanka’s suggestion that people looking for college as a place to hide from unemployment while they bury themselves in debt that they might never be able to pay, they should give that some serious thought before jumping in.

The starting place for them is to research the public statistics on college debt and the lack of jobs in fields they might be considering.

Parents once considered that spending their savings down to put their kids through college was an investment in having someone to take care of them in old age, but now have to see the possibility that the kids may have their hands full keeping a roof over their own heads.

In this new set of circumstances, one must hang on to all the cash cushion one can, cut expenditures to the bone, and look for income producing work at the lowest investment in time and money. The last thing they need to do is make a bad situation worse by gambling on finding an easy way out.

As for Ivanka and Jared, they made a choice to milk their father’s presidency for every dollar they could and will now have to wear that robe for the rest of their lives, including their father who might be spending his 70’s behind bars, which would be rough duty for his Secret Service agents… Jim W. Dean ]

When I read this week that Princess Ivanka Trump telling American workers they need to eat cake, I’ll admit still being surprised by the Trump White House. According to the reports, Ivanka told the country’s laid-off workers to consider alternative career paths because their old jobs won’t be coming back.

For those of you in disbelief like I am, Ivanka Trump has unveiled a new jobs initiative titled “Find Something New”. She revealed her genius plan to make America even greater, at a virtual roundtable with IBM executive chairman Ginni Rometty, and Apple CEO Tim Cook, during which she and her technocrat fellows suggested Americans stop going to college too.

No, I am not joking. Yahoo! News reported the gist of Princess Ivanka’s insanity with the acknowledging that:

“…jobs are changing and the pandemic has accelerated the pace,” the program encourages workers to consider a range of careers, including those that don’t require a college degree.”

King Trump’s little princess is also taking heat for pimping Goya Beans on Instagram at a time when the company was facing a boycott over their CEO applauding King Trump. Goya, which is America’s monarch followed Princess Ivanka’s lead and posed on Instagram with a whole spread of Goya products.

The royal family seems to be thumbing their noses at the American people and federal regulators who have taken notice of the obvious federal ethics violations. Not even our fuzzy-headed emperor can promote beans and other products like this.

Goya’s CEO, Robert Unanue, is a huge fan of King Trump. The billionaire’s praise of Trump caused an uproar in the Hispanic community when he told a press conference that the country is “truly blessed… to have a leader like President Trump.”

King Trump named Princess Ivanka as his advisor in charge of such things as education initiatives, the economic empowerment of women and their families, and “job creation and economic growth through workforce development, skills training, and entrepreneurship.”

There was a brief space in time when even King Trump’s most ardent enemies seemed ready to praise Princess Ivanka as she pulled off the women’s empowerment thing. But even if the fair princess had every good intention, her dark prince Jared would certainly overshadow or trample the good right out of her.

Jared Kushner, the slum lord anxious to evict tenement residents who could not pay during a pandemic, he’s the one in charge of that bothersome coronavirus case data King Trump’s been pestered by.

As the US state of Florida was passing almost every country in the world with new cases, America’s ruler waved a mighty hand to take the Centers for Disease Control (CDC) out of the information and medical equations.

Then Trump ordered hospital data diverted through the White House instead of the CDC in Atlanta. Since Prince Jared was ordained to take a pivotal role with the coronavirus task force, it seems logical to assume he’ll be the one sifting through the COVID-19 deaths and so forth, to let Trump’s subjects know the “real” score on the crisis. Just the other day Prince Jared called the Trump dynasty’s coronavirus effort a “brilliant success story.”

The genius prince predicted back in April that by now the American Kingdom would be buzzing once again with jobs, prosperity, and economic justice for all. Meanwhile, Robert Kaplan, the president of the Federal Reserve Bank of Dallas, was quoted the other day saying; “…the surge in infections and hospitalizations was having a “chilling effect” on the economy.”

With many states on the brink of going back into a lockdown situation, King Trump is on pace to meet the fate of Louis XVI if things don’t turn about quickly. Just about all that is missing is for Queen Melania to quip; “Let them eat cake,” about the time unemployment benefits start to run out for the 30 million jobless people Princess Ivanka told to “start hunting” for work. I guess the King’s top adviser knows better than anyone, just how bad the news is about to be.

I’ll leave you serfs and peons with a footnote on our liege’s rule so far. The rise in the number of unemployed workers due to COVID-19 has been far greater than the increase due to the Great Recession.

A new surge, the second lockdown in Florida, Texas, and California closing back down will probably cause a freefall of jobs and markets, not to mention further civil unrest. The kingdom is on the verge when all is said and done. Princess Ivanka’s “Find Something New” program may just become revolutionary, really revolutionary.