[ Editor’s Note: The US Air Force continues to flight test the B52 carrier version of its first hypersonic missile, taking advantage of these old but still usable planes to carry them to launch range positions that eliminate the need for ground installation launch facilities.

Note the four pack version below in the feature image. A dozen B-52s could launch a first strike with a lot of punch with mini-nukes as warheads. We do not know what the range of the missile is yet, but you can rest assured that there will be versions of these to be tested.

The problem with these in a tense situation is that when the B-52s take off and are spotted by satellite surveillance, a similarly armed potential target has to get its own retaliatory strike in the air to assist in convincing the attacker to turn around.

This can turn into a high stakes game of chicken that both sides could lose.

I don’t like to make predictions on a situation like this so early, but I believe that when we see the major adversaries armed with these, it will be time for a new treaty. But the problem is that Trump has pooped in the water.

How could anyone trust the US signature on a treaty anymore?… Jim W. Dean ]

What could be the final test for the US Air Force’s B-52 Stratofortress bomber to field the AGM-183A Air-launched Rapid Response Weapon (ARRW) was carried out in California on Saturday. The next step will be to test-fire the hypersonic missile from the huge bomber, which could come later this year.

The US could soon have a fieldable hypersonic weapon if tests on the B-52’s ability to carry the ARRW continue to be successful. An August 8 test flight off the coast of California “verified system integration with the B-52 launch platform and telemetry while practicing concepts of operations that will be utilized during its first Booster Test Flight later this year,” the Air Force said in a news release.

During the test, the AGM-183A IMV-2 (Instrumented Measurement Vehicle) slung underneath the B-52’s huge wings successfully transmitted telemetry and GPS data back to ground stations at Point Mugu Sea Range, a vast testing range that extends off the coast of California near Los Angeles.

“This is a major milestone for the program, the team and our Air Force,” Brig. Gen. Heath Collins, Air Force program executive officer for weapons, said in the release. “ARRW is the first step in bringing game-changing hypersonic capabilities to our Warfighters.”

The first ARRW captive-carry test happened in June 2019, and if the ARRW’s test firings are successful, the missile could be declared operational in late 2022. 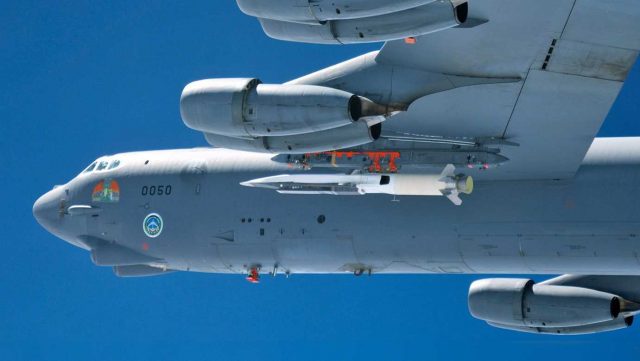 The Air Force chose to continue development of Lockheed Martin’s ARRW over its competitor design, the Hypersonic Conventional Strike Weapon (HCSW) by the same firm, back in February. The missile is reportedly capable of reaching speeds of Mach 20, or roughly 15,300 miles per hour – too fast for the vast majority of air defense systems to detect and intercept.

The US lags behind the international hypersonic arms race, as both Russia and China have already developed and fielded hypersonic weapons in recent years.

With the aging, lumbering strategic bomber struggling to find relevance in the 21st century, the Air Force has looked to its huge size as an asset by seeking to turn the B-52 into a “missile truck” capable of hauling dozens of cruise missiles and hypersonic missiles, both conventionally armed and nuclear-tipped, up into the skies. A similar future is envisioned for the Air Force’s B-1B Lancer fleet.

However, not all these tests have gone successfully: another test back in June of the Hypersonic Air-breathing Weapon Concept (HAWC) being developed by the Pentagon’s Defense Advanced Research Projects Agency (DARPA) saw the hypersonic weapon fall off the B-52 in mid-flight. That test, like this one, was flown out of Edwards Air Force Base.