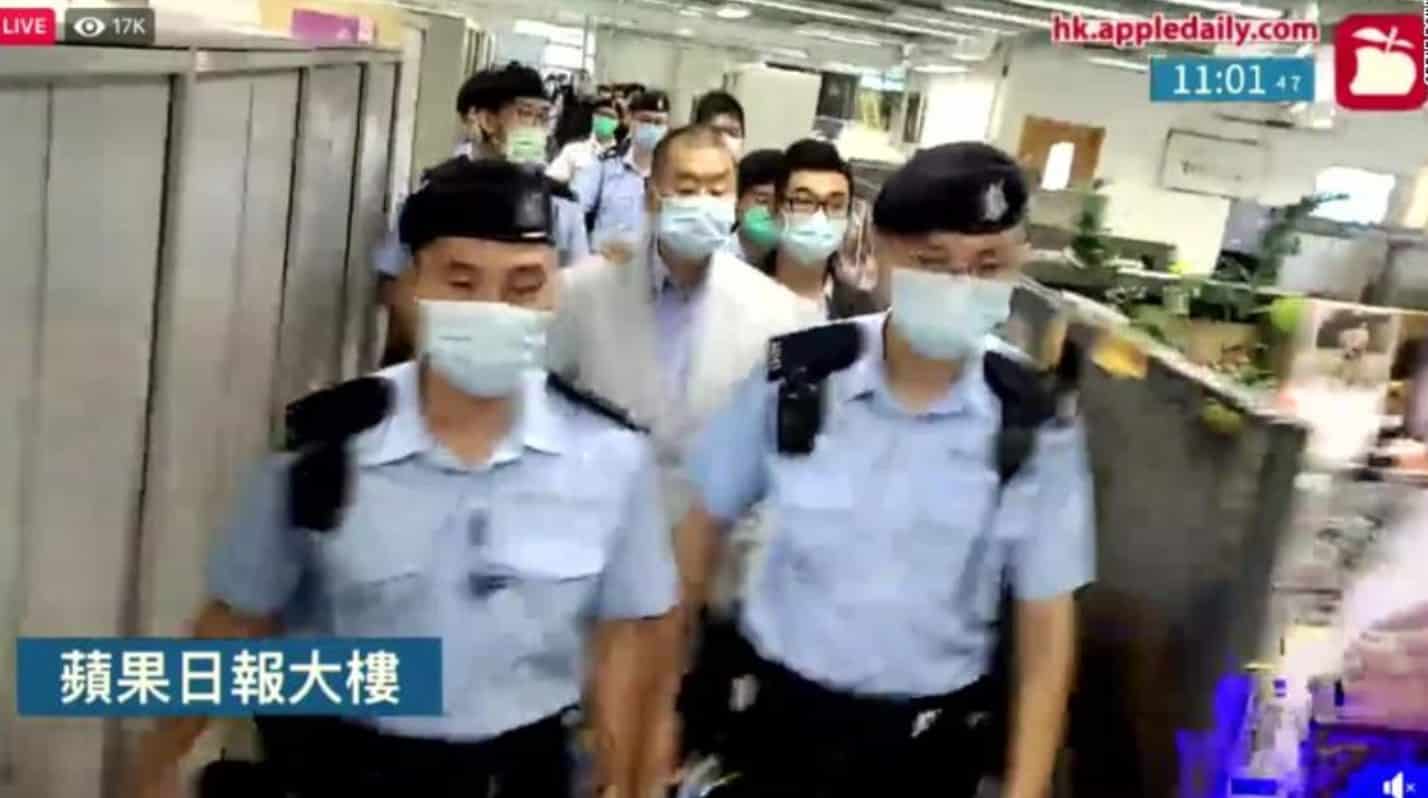 Jimmy Lai, a billionaire media tycoon, based in Hong Kong, has been arrested, accused of sedition, criminal fraud, and collusion with foreign forces.

The 71-year-old Lai, originally from Mainland China, owns a right-wing tabloid Apple Daily. He is known for dutifully echoing media salvos that are being fired by Western governments and media outlets, salvos against Beijing, and SAR administration, which in turn gained him, in the West, of course, various flattering and unreal titles such as ‘an outspoken pro-democracy figure in Hong Kong who regularly criticizes China’s authoritarian rule’ (CBS News).

“The Hong Kong journalist association head, Chris Yeung, said the raid was “horrendous.” “I think in some third-world countries there has been this kind of press freedom suppression, I just didn’t expect it to be in Hong Kong,” he told media.”

“Some kind of third-world countries” is surely a racist, patronizing and derogatory expression, which is, shockingly, regularly used by the so-called ‘pro-democracy’ activists in Hong Kong. These ‘activists’ are respectful only towards the West, no matter what atrocities West is committing all over the world, and even at home.

Jimmy Lai, as well as many of his colleagues, are actually racists, against their own country – China – and non-Western countries and races in all corners of the Planet.

Their language and definitions would be, actually, unacceptable, even illegal, in such countries like the U.K. or the U.S. They manage to get away with their derogatory, patronizing and racist linguistics mainly because of the obedience of the mass media in the West, which is under strict orders not to criticize Hong Kong’s anti-Chinese individuals, particularly leaders.

Colleagues from an influential publication The Grayzone reported on June 9, 2020:

“A leading Hong Kong “pro-democracy” figure, Jimmy Lai, has denounced nationwide protests in the United States against police brutality and systemic racism, which were sparked by the police killing of an African-American man, George Floyd. Lai’s views reflect a significant segment of the city’s protest movement, who affirm the exceptionalist myth of the US as a beacon of “freedom and democracy.”

Hong Kong’s “pro-democracy” activists have gone so far as to derail the efforts of an African-American woman who attempted to organize a Black Lives Matter demonstration in the city, accusing her of being an agent of the police and Communist Party of China.

Meanwhile, some leaders of Hong Kong’s anti-Beijing opposition, such as Joshua Wong, have claimed to support the US protests and Black Lives Matter. However, these expressions of “solidarity” ring hollow, given that, like Lai, these “pro-democracy” leaders have also forged an alliance with the very US state and far-right politicians who have demonized and sought to brutally repress American protesters. In fact, Wong and his comrades have carefully avoided making any specific criticism of President Trump or any of their other sponsors in Washington.”

Mr. Lai is clearly an extreme right-wing individual and agitator. There is very little ‘democratic’ in his ideology and rhetoric, unless ‘democracy’ is, by definition, something Western, something that serves exclusively interests of North America, Europe, and Australia.

According to Lai, who met top Trump administration brass, on several occasions, “Only Trump can save America.”

His hatred towards US blacks and Native Americans is shocking.

“On June 2, Lai shared a video by Avi Yemini, a far-right YouTube personality and former Israeli army soldier, declaring that it was “bloody disgraceful” to liken the “riots in America” with Hong Kong’s protest movement.

In the video, Yemini rattled off right-wing talking points, referring to the anti-racist protesters as “antifa extremists” who are “destroying everything that is American, in fact, everything that Hong Kongers are fighting to obtain.”

Lai expressed his gratitude to Yemini, writing “thank you for speaking up for us #HKers.”

According to the Australian Jewish Democratic Society, Yemini has formed extensive ties to neo-Nazis such as the Soldiers of Odin and fascist agitators like Milo Yiannopoulis.”

That is, of course, not at all surprising. From the 2014 “Umbrella Revolution” movement, until 2019/20 riots, I wrote in detail about alarming trends: the anti-Beijing ‘activists’ have been demonstrating fanatical right-wing, even fascist tendencies. Their spite for the victims of Western imperialism and neo-colonialism has been absolutely shocking. They have been showing zero interest in social injustice in the United States.

First, I thought that they simply did not know. Later I realized that they ‘did not want to know.’ They wanted to belong to the group of the oppressors, not to the oppressed. Their desire has also been to be ‘above China,’ to be considered as qualified to tell Mainland China how to live, how to run the economy, and to ape Western political institutions and defunct way of life.

Yes, originally, Mr. Lai came from China. If he loved progressive China, he would not have left. Or he would not antagonize it. He wanted to make money, fine: he should have made money, and then use it to improve his great nation. But not Mr. Lai: he left China as an enemy. His allies became those in the West who want to destroy China. Mainly, the right-wing, even fascist individuals and groups. These are folks who are now sending battleships and aircraft carriers near Taiwan and to the South China Sea.

Mr. Lai and his friends are helping to trigger WWIII. Soon, if they succeed, they might be co-responsible for the millions of lost lives. Therefore, they have to be stopped.

It is highly unlikely, but just for a moment, imagine China, according to people like Lai! Right-wing, spiteful China, which serves business, not its people, China, which spits on poor countries and copies Western imperialism. Needless to say: Chinese people do not want such motherland.

And so, he was led, paraded, through his newspaper, on the way to the police station. He will be charged with some of the most terrible crimes a man can commit. Some of the most shameful, too. Many great countries, attacked by the West and the personalities like Lai, simply crumbled. China never will. China stands its ground, proudly. For its people and the world. The new security law helped. A man who did so much harm to his people has fallen. And Long Live Hong Kong! Long live China!