Scroll to the bottom of this article for various sources estimating COVID death rates, including VT Senior Editor Gordon Duffs.

This week’s False Flag Weekly News (watch it above, click HERE for links) features numerous stories on corona madness & censorship: The governor of New Mexico wants to make masks and distancing permanent; Melbourne cops have free rein to enter private homes; the UK may lock down obese people; ethicists are floating a proposal to dose Americans with magic mushrooms to get them to accept masking/distancing/lockdowns, and Facebook has removed more than 7 million posts on COVID in an attempt to enforce orthodoxy.

Sachi Kuhananthan, MD, a retired physician from El Paso, began posting on nextdoor.com‘s health and nutrition section a little over a month ago. His posts were well-received, garnering unanimously positive comments and becoming among the most popular items on the site—until August 13, when he posted a brief article entitled “Scams and Lies Related to COVID19.” Hours after posting the article, Dr. Kuhananthan discovered that his post had been removed and his account had been suspended for four days, allegedly for “violating terms of service.”

Dr. Kuhananthan immigrated to the US from Sri Lanka in part because of America’s reputation for freedom of expression. Now, he says, “All of a sudden I am feeling like I am living in Russia or North Korea.”

Here is an updated version of Dr. Kuhananthan’s post, featuring minor editing but preserving the gist of his argument. Since the remedy for bad speech is better speech—not censorship—feel free to argue against him in the comments section. Please be specific about any alleged flaws in his arguments.

Scams and Lies Related to COVID19

Our government has reserved and is paying for at least 700 million doses of COVID19 vaccines. Our population is 330 million. Why are we ordering so many? Are we going to vaccinate cats and dogs also? Who is making the money?(2)

The media repeatedly cites “expert” claims that 2% of Americans (about six million people) are infected. Are they ignorant or lying? I estimate that between 25 million and 72 million Americans are already infected. (3)

JAMA (Journal of the American Medical Association) has a recent article where it claims that the fatality rate for Covid19 is as bad as 1918 Spanish flu. Bunch of nonsense. The Spanish flu killed 50 million worldwide. I expect 2 to 4 million will die from COVID19 worldwide. In 1918 the world population was one-third of the current population.   Therefore the COVID19 fatality rate is only one percent of that of Spanish flu.

Why are our government and AMA lying and misinforming the public? Profit motive? You decide.

(1) Board certified in internal medicine and emergency medicine until retirement; MS in Physiology and four-year residency from the University of Illinois, Champaign-Urbana.

Also, note that to achieve herd immunity we need to vaccinate at most only 60 to 80 percent of the population—possibly much less. That means fewer than 200 million will need to be vaccinated. Therefore 400 million doses will be plenty if we have to give two doses for each person.

(3) Up to 80 percent are asymptomatic and the reported positives of about 6 million will give a figure of 30 million total real infections. I am assuming they have tested only patients with symptoms. One can also estimate the actual number of infections by counting deaths and multiplying by the inverse of the fatality rate, which I estimate could be as low as one in five hundred based on studies I have read. The lowest fatality rate reported was 0.28 percent based on a study of a German town. The total deaths of 165,000 multiplied by 500 lead to the figure of 60 million total infections. If the 165,000 death figure represents a 20% undercount as a JAMA study argues, total infections would be around 72 million.

If these numbers are anywhere near correct, herd immunity may not be nearly as far off as alarmist “experts” have stated or implied. That would mean that Dr. Fauci’s claim that we can only reach herd immunity after an “enormous” death toll may be grossly exaggerated—but enormously profitable to the pharmaceutical-industrial complex.

Many good issues are brought up here but the assertion of a .0006 death rate based on a Montana study is misleading and fake.  Current COVID death rates, against those infected, is .0559 or 5.59 percent or “close to 6 out of one hundred, including kids and those who never get sick.  Proof: 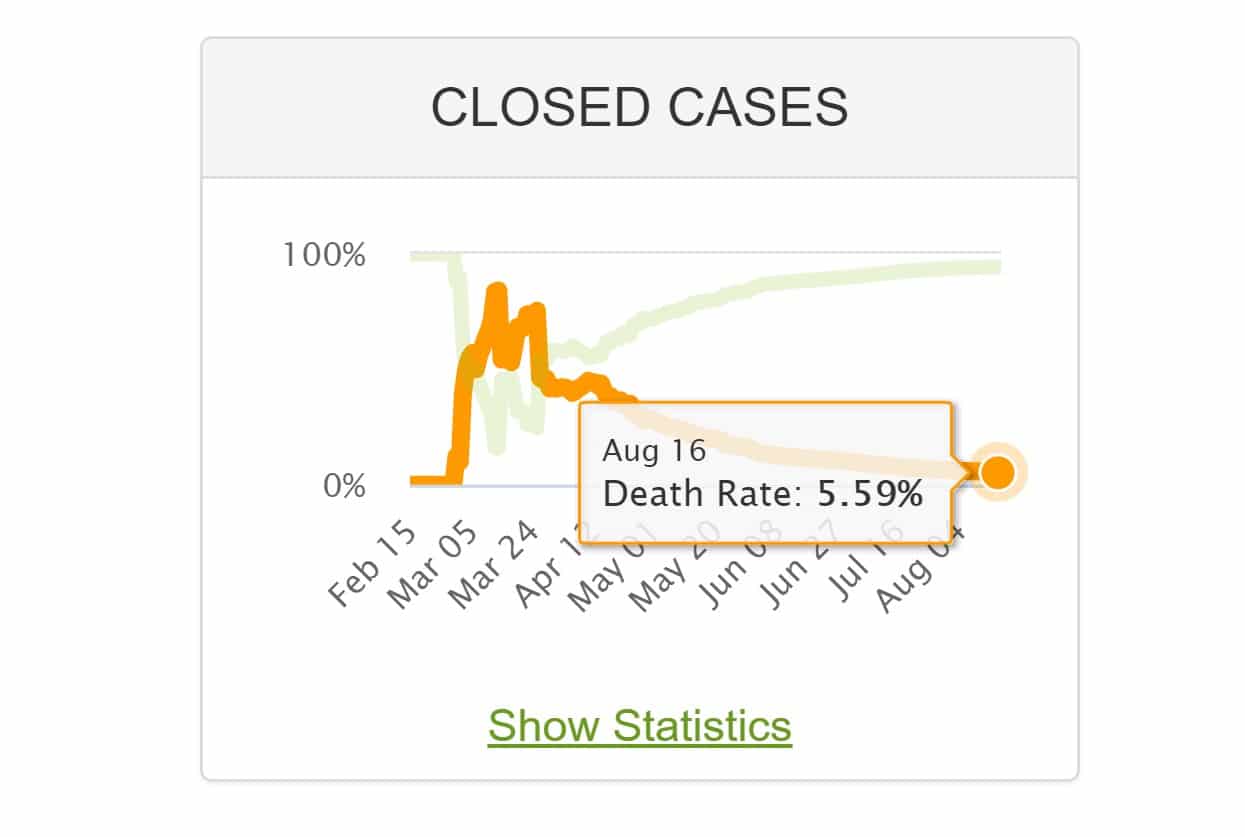 Otherwise a good article with one dangerous lie that might cause some to do harm to themselves and their families and our country.