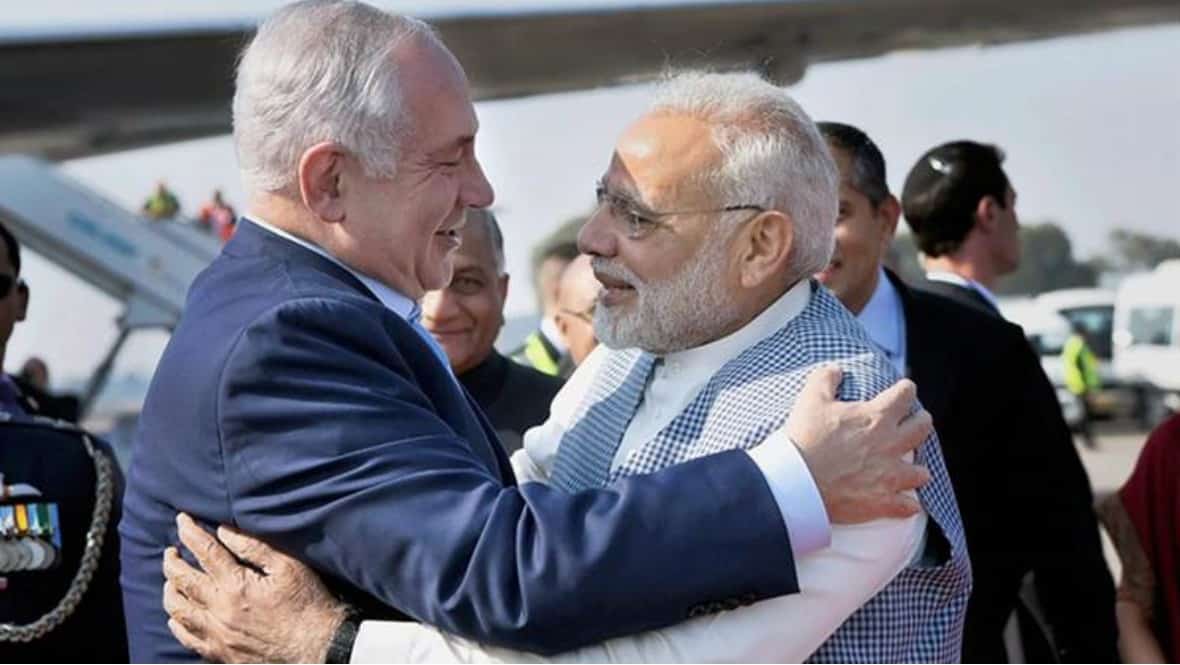 Without bothering for the reaction of the international community, Indian extremist Prime Minister Narendra Modi, the leader of the ruling party BJP, has continued anti-Muslim chauvinism in India by leading Hindu terrorism against the religious minorities, especially Muslims.

In the recent past, while addressing the Nation and the Indian Parliament about the tensions with minorities in India in passing [Citizenship Amendment Act 2019] CAA, Prime Minister Modi said:

“In India, live like Indian Hindu. Any minority, from anywhere, if they want to live in India, to work and eat in India, they should speak an Indian language like Hindi Gujdrati, Punjabi, Bengali…If they prefer Sharia Law, and live the life of Muslim’s then we advise them to go to those places where that’s the state law…India does not need Muslim minorities…we will not grant them special privileges…no matter how loud they yell “discrimination…The Indian customs and traditions are not compatible with the lack of culture or the primitive ways of Sharia Law and Muslims….When this honorable legislative body thinks of creating new laws, it should have in mind the Indian national interest first, observing that the Muslims minorities are not Indians”.

Besides persecution of Indian Muslims, Modi has also accelerated war-hysteria against Pakistan and instructed Indian forces to continue shelling across the Line of Control (LoC), which has killed many innocent civilians inside Pakistani side of Kashmir.

In fact, Modi is promoting religious fanaticism and the ideology of Hindutva (Hindu nationalism) particularly against Muslims.

In this regard,  Indian extremist rulers’ various moves such as abrogation of the special status of the Jummu and Kashmir by revoking articles 35A and 370 of the Constitution on August 5, 2019 to turn Muslim majority into minority in the Indian Occupied Kashmir (IOK), continued lockdown in the IOK, issuance of domicile certificates to 40000 non-Kashmiris to bring demographic changes in the Muslim-majority area, martyrdom of thousands of the Kashmiris there, blaming Indian Muslims and Pakistan for spreading coronaviurs in India and IOK and targeting Muslims etc. are notable.

Regarding Indian Held Kashmir, reports suggest that due to lack of medical treatment and food, hundreds of the Muslims have already died. A military lockdown of more than one year and deployment of larger number of security forces have martyred many Kashmiris, including women and children through extrajudicial killings, while they have stopped journalist’s entry in that region. More people might have also died owing to the coronavirus pandemic there.

In this respect, BBC pointed out: “Unprecedented restrictions have put Kashmir into a state of lockdown…In one village the residents said…Two brothers were woken up and taken to an outside area…They kicked us…gave us electric shocks, beat us with cables…we screamed, they sealed our mouth with mud…We told them we are innocent…I told them don’t beat us, just shoot us. I was asking God to take me, because the torture was unbearable.”

Encouraged by the Premier Modi’s bigotry, Hindu extremist outfits such as BJP, RSS VHP, Bajrang Dal and Shiv Sena, including other similar parties have been promoting religious and ethnic chauvinism against the Indian Muslims.

In this connection, in the aftermath of the Indian elections 2019, news reports have highlighted different cases in which especially Muslims were violently targeted by the radical Hindus. In respect, RSS chief Mohan Bhagwat stated on October 8, 2019: “Bharat is Hindu Rashtra and all Bharatiyas are Hindus.”

Western media reported: “Indian authorities had linked cases of COVID-19 to the Muslims…Muslims have been beaten up, nearly lynched, run out of their neighborhoods or attacked in mosques…Hindu extremists are scapegoating the country’s entire Muslim population for deliberately spreading the virus through “corona jihad, Indian hospitals segregates Muslim and Hindu coronavirus patients…In what many are calling a case of “apartheid” during a global pandemic…made separate wards for Hindu and Muslim patients. It is a decision of the government”.

“Did those who commit crimes against Muslims in India…think that Muslims will remain silent and do not move politically, legally and economically against them? a statement by the general secretariat of the Kuwait Council of Ministers said…people in the Gulf countries felt outraged over the way Indian Muslims were being blamed for the coronavirus pandemic…the assault by the RSS–the BJP’s parent body–on Muslims is unacceptable and have labelled it a “terrorist” group that should be banned in the Gulf…Kuwait has appealed to the OIC to intervene in India to tackle anti-Muslim sentiment in the country”.

The reality is that under the guise of COVID-19, Indian fanatic entities are pushing Indian Muslims out of informal sector jobs. Muslims are facing a new form of concerted-deliberate economic marginalisation. These zealots are instructing the Hindus not to buy anything from Muslims’ shops.

Besides, the Indian Citizenship Amendment Act 2019 (CAA), passed by the Indian Parliament further exposed the discriminatory policies of the Modi regime. The CAA coupled with the National Register of Citizens (NRC) is mainly against the Muslim immigrants, particularly those from Pakistan, Bangladesh and Afghanistan.

Since 2019, daily mass protests have continued across every state in India against the CAA and the NRC. Despite criticism of the rights groups, foreign leaders, the UNO and moderate Hindus in wake of violent protests which killed and injured hundreds of persons—mostly Muslims by the police and prejudiced Hindus, Modi’s government has not withdrawn the CAA/NRC.

In this context, a government-appointed-the Delhi Minorities Commission said in its report on July 16, 2020:

“At least 53 people, mostly Muslims, were killed and more than 200 were injured in the worst communal violence in the Indian capital Delhi…against a new citizenship law [CAA] in February, this year…laying out the path to citizenship for six religious groups from neighbouring countries except Muslims. Critics said the law was discriminatory and flouted India’s secular constitution…Muslim homes, shops and vehicles…mosques were selectively targeted during the rioting…broke out across the country…Seemingly, to crush the protests, with support of the administration and police, a retaliatory plan of pro-CAA protesters was worked out to trigger violence at a large scale…Some senior BJP leaders like former member of Delhi legislative assembly Kapil Mishra of fuelling the Feb 23 violence”.

In its recently released annual report, the United States Commission on International Religious Freedom (USCIRF) recommended that the State Department should designate India as Country of Particular Concern—pushed for imposing targeted sanctions on Indian government agencies and officials responsible for severe violations of religious freedom by freezing those individuals’ assets and/or barring their entry into the US under human rights-related financial and visa authorities.

“In December 2019, parliament passed the CAA…for non-Muslim migrants already in India from Afghanistan, Bangladesh, and Pakistan by treating them as refugees fleeing religious persecution…The CAA…in conjunction with NRC…is a goal outlined in the BJP’s manifesto…this potentially exposes millions of Muslims to detention, deportation and statelessness…cow protection had been promoted by the BJP and the RSS…Lynch mobs…have attacked minorities—including Muslims…Since the BJP came to power in 2014, there have been over 100 attacks…often with the police’s complicity”.

Notably, 5th August (2020) was the first anniversary of India’s revocation of the special status of the state of Jammu & Kashmir (J&K). On this very day, Kashmiris living on both sides of the LoC and their brethren in Pakistan, including rest of the world celebrated the day as the Black Day, while Pakistan, especially observed August 5 as ‘Youm-e-Istehsal-e-Kashmir’ (Day of Exploitation in occupied Kashmir/‘Kashmir Military Siege Day’).

People protested against India, its lockdown in the IOK and brutal treatment of the Kashmiris by the Indian forces, while reminding the internal community regarding the right of self-determination of the Kashmiris as recognized by the UNO-related resolutions. In many Western countries, Kashmiris, Pakistanis and human rights activists conducted demonstrations and rallies.

Modi’s anti-anti Muslim chauvinism took a dangerous turn on August 5, this year when he laid the foundation stone for the Hindu Ram temple at bhoomi pujan ceremony at the site of the 16th-century Babri Mosque in Ayodhya.

The Babri Masjid mosque was destroyed by Hindu zealots with pickaxes and crowbars in December 1992, sparking massive Hindu-Muslim violence that left some 2,000 people dead, most of them Muslims. Even, in its biased verdict, Indian Supreme Court allowed a temple to be built in place of the demolished mosque.

On the same day, in a statement, the Foreign Office (FO) of Pakistan said:

“The flawed judgment of the Indian Supreme Court paving the way for the construction of the temple reflected preponderance of faith over justice in India, where minorities, particularly Muslims and their places of worship are increasingly under attack…A temple built on the site of a historic mosque will remain a blot on the face of the so-called Indian democracy…The international community, the United Nations and relevant international organisations should play their part in saving the Islamic heritage sites in India from the ‘Hindutva’ regime and ensure protection and religious rights of minorities in India”.

It is due to the inaction of the US and some major Western countries that Modi is leading the racist Hindutva supremacists against the Muslims in the occupied Kashmir and across India. So, Modi’s under undeclared war against the Indian Muslims will not stop.