Mike Pompeo has been leading the charge in the Trump administration to try to trigger the snapback provisions in the Iran nuclear deal, the JCPOA. And this has led to a chorus of derision and mockery from all over the world, not just from sources one would expect, like Foreign Minister Zarif from Iran, but from elsewhere as well even including from John Bolton, who was (Pompeo’s) former extremely hawkish anti-Iran colleague.

Everybody is laughing at Pompeo at this point because Pompeo’s position is that even though the United States has left the JCPOA and is out of the deal, it is still somehow in the deal, and able to trigger snapback. Pompeo also claims that the United States is going to unilaterally trigger multilateral sanctions.

So, everyone is scratching their heads and wondering what Mike Pompeo is smoking. He thinks that he can be in and out of the deal at the same time. He thinks he can impose unilateral multilateral sanctions. This violates elementary logic in a rather amusing way.

It’s like Lewis Carroll and Alice in Wonderland, saying you can believe six impossible things before breakfast. Well, Pompeo has already got two of them. And it is also reminiscent of the complete lack of logic in the US-Iran policy. They’re basically running on fumes, and they’re desperately clutching at these illusory remedies for their bankrupt position by invoking these kinds of crazy contradictions.

So, why are the so-called Americans—people like Pompeo are really, of course, representing Netanyahu, Trump was inserted into the Oval Office by Netanyahu’s people, precisely to carry out all of these insane Likud policies—so why are they so desperate? Why are they acting so irrationally, out of sheer desperation?

I think the reason is that they have won a certain battle in terms of trying to remake the Middle East region, on behalf of Israel, but they’ve lost the war. Because they’ve painted themselves into a corner, both in terms of global public opinion and now regional public opinion as the Emirates have made this treasonous deal with the Israelis alienating the entire region, the entire Arab world.

And this is at a moment when the Arab oil states are in serious decline. They’re about to really step off the stage of history, as discussed in Patrick Cockburn’s column “There’s a Historic Change Taking Place in the Middle East.”

He points out these Arab oil states, because of the collapsing price of oil, among other things, are now essentially about to lose their whole base and their population is going to be impoverished. And the leadership, such as the leaders of the Emirates, and the Saudis and the other Persian Gulf sheikhdoms in particular, are all going to be overthrown.

So who will be left? The countries that have actual economies other than just oil, countries that are not just gas stations in the desert. And that includes not just Turkey, of course, which has a strong economy, but also Iran, which has built its own DIY – Do It Yourself — local economy because of all the sanctions.

Iran is not dependent on oil exports partly because it’s been sanctioned so heavily. So now it’s the leading auto manufacturer in the region. It’s putting satellites in space. And once it gets through this Trump sanctions period which is happening because Trump and his people have alienated the whole world, Iran will come roaring back.

Meanwhile, the Arab world will see massive unrest, as the poor majority of pious Muslims gets on board with the Islamic Revolutionary spirit against their extremely corrupt Zionist secularist elite rulers.

And all of this does not bode well for the genocidal Zionist entity occupying Palestine. No wonder they’re so desperate. No wonder the Zionist stooges like Pompeo are barking out this kind of insane nonsense as the Trump administration collapses and as its Iran policy collapses. We’re probably going to see more of this kind of insanity—hopefully, nothing that will lead to any explosions of extreme violence or larger war—but you can’t put anything past them, as we saw with that presumably Israeli bomb that destroyed the port of Beirut.

And so the region needs to be on its guard. Better things will be coming, but it may be a very rough period before they finally arrive. 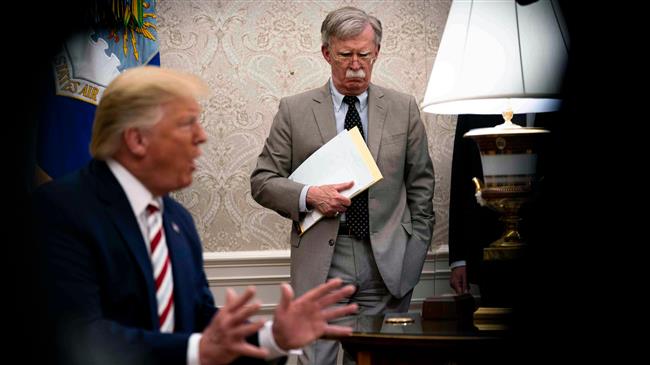 Iran hawk Bolton says US snapback ‘not worth the risk’