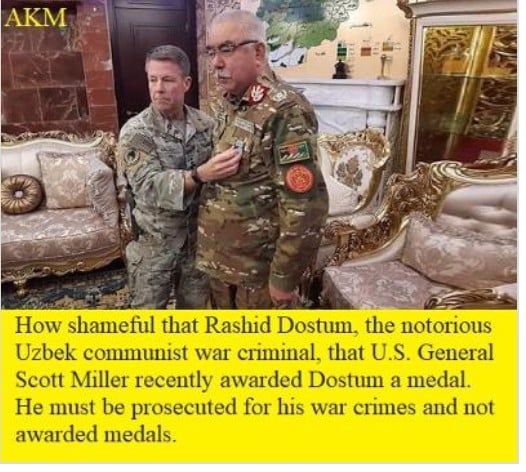 As you know on February 29, 2020, the Doha peace agreement between the United States and the Taliban was signed. A key driver of the agreement was the exchange of prisoners and the convening of intra Afghan peace talks. These swaps and subsequent talks were to begin within 10 days after the execution of the agreement.

Currently, the Kabul Administration, which consists of war profiteers who have blatantly stolen U.S. taxpayer and Afghan citizen monies, documented war criminals and communists are sabotaging the Intra Afghan talks through delays and back channels with the members of the U.S. government.

The Kabul administration under Ashraf Ghani is delaying the present efforts of Afghans to organize and convene the intra Afghan talks, as they do not want the peace process to succeed until the end of his term.

I strongly believe that those in the current Kabul Administration wants to prolong their rule in order to launder ill gotten monies and cover-up their financial crimes. Reports from SIGAR and other watchdog organizations are quite clear on the widespread corruption, which we as U.S. taxpayers foot the bill. Head of SIGAR, John Sopko succinctly summarized in a June 2020 speech the widespread corruption that has festered over the past 19 years:

“SIGAR investigations have identified corruption at virtually every level of the Afghan state – from salaries paid by international donors for Afghan soldiers and police who do not really exist – to theft of U.S.-military provided fuel on a massive scale.”

“These examples skim the surface of what we have found. Independent surveys continue to highlight that most Afghans report having to deal with corruption on an almost daily basis – often in the form of a bribe to a government official to get something the government should otherwise be providing, such as basic access to health care, justice, or education.”

“Additionally, it also acts as an extreme disincentive for the private sector investment that Afghanistan so desperately needs in a post-peace environment, when donors will likely reduce or eliminate their financial support to the government.”

It has been reported that members of the Ghani family have been misusing monies derived from the Afghan Women’s Fund and other “foundations”, for the purpose of funneling those monies to various politicians to gain influence in order to sabotage and delay the peace process.

Conversely, documented war criminals such as Rashid Dostum, the notorious communist war criminal, have been honored by our government with medals and money. He must be prosecuted for his war crimes and not awarded medals.

For justice and peace, I have written below about just a few of the groups, officials and individuals that must be prosecuted for war crimes and human rights violations. Below is just the tip of the iceberg.

During these past 19 years, the United States and its allies have utilized thousands of private contractors/mercenaries to fight its war. Some of those troops have been replaced with paramilitary forces, primarily foreign contractors whom have terrible human rights records and have committed war crimes, which have been well documented by organizations such as UNAMA and Human Rights Watch.

U.S. taxpayer monies have been diverted to funding and training paramilitary “death squads” like the National Directorate of Security (“NDS 01” and “NDS 02”) Khost Protection Forces (“KPF”), Kandahar Strike Forces and many other militias, who are targeting and assassinating innocent Afghan villagers, peace activists, journalists, and Afghan intellectuals.

It is also well reported that these groups are often involved in the drug trade that impacts U.S. citizens and Afghans alike. Unfortunately, this information has not been disclosed and/or downplayed to the American people.

As a part of this strategy, the current administration is forging even stronger ties with corrupt Afghan politicians who have stolen billions of U.S. taxpayer funds and war criminals such as Abdul Rashid Dostum and Asadullah Khalid. Both have well-documented track records of human rights violations.

Abdul Rashid Dostum was the subject of articles in the Time magazine and Newsweek. As reported in the Time on November 19, 2001, and in Newsweek, on November 5, 2001, Dostum and his group raped many Afghan women and children, “…Dostum’s marauders chopped off breasts and tied the toes of women behind their heads..”

Instead of prosecuting this criminal, my U.S. government ignores his war crimes, supports and keeps him on the payroll. The United States government needs to follow the rule of law and international law. Instead it is covering up these war crimes and helping him commit new war crimes against the Afghan/Pashtun like recently in Faryab Province. In addition, the Afghan majority have not forgotten about the war crimes committed by Dostum against the Pashtun tribesmen in November 2001 at Dasht-e-Leili.

Asadullah Khalid is the current Defense Minister of the Afghan government. He has been implicated by Canadian officials for his extensive involvement in drug trafficking, sexual abuse and in the murder of United Nations workers.

For more than four decades, I have been working for peace in Afghanistan. The Doha peace agreement needs to be implemented now with the release of the remaining prisoners and the expeditious convening of the intra Afghan talks. Otherwise, I believe the peace talks will fail. Only the war profiteers, communists, war criminals, Iran, China, Russia, India and Pakistan will benefit from this breakdown. The ordinary Afghan and American people will be the victims and suffer.

When the Afghan Communists took over my country in 1978 I was the victim. I lost my homeland and family due to the Afghan Communists and Soviets invasion. Now, my family, my three children, are the victims of the tragic events of 9/11 on three levels, as Americans, as Muslims and as Afghans. They face overt and covert discrimination, the loss of their friends and the loss of their financial and personal security. In 2001, my oldest son asked me if our family was going to be interned like the Japanese. They lost their childhood.

In addition, the allegations in the report of the Department of Defense Office of Inspector General to Congress must be investigated. This report is just a way to stop the peace process and continue the war and the profiting from the war.