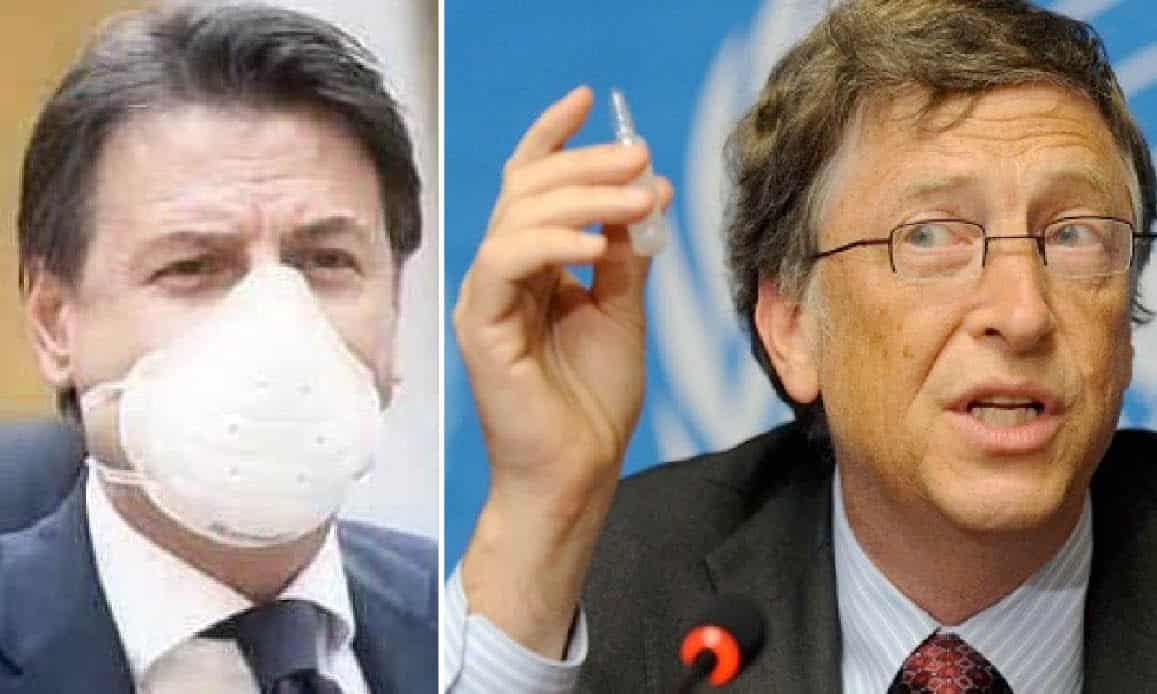 Thanks to some southern gods who protect him from the Roman hills – no one dares to think of the untouchable tenant of the Quirinale (presidential palace) who sheds pallid light of presumed wisdom in the peninsula and throughout Europe – the miserable lawyer of the Italian bureaucracy, born Giuseppe Conte, is doing the Bis of Government and anti-Covid-19 diktat, thanks to the Democratic Party and a handful of parliamentary servants: the 5 Star Movement and the indispensable senators of Matteo Renzi’s Italia Viva prostrate themselves in subjection to the new mayor of the boot, which has grown heavy with dirt.

Calling him dictator, or better still Duce, would be accurate, but insulting to those (Benito Mussolini) who really were, by giving pensions and other fundamental social reforms on which the left people like it or not like it, the prosperity of the Ausonio people celebrated by Licofrone before that the landing of the guerrilla Giuseppe Garibaldi, mercenary of the British Freemasons, came to import the Ancient Scottish Rite Accepted into the ganglia of power and with it its southern operational tool which was the Mafia: considered founded together with the Unification of Italy, even before than here, by judge Rocco Chinnici murdered by a Cosa Nostra bomb.

Now Giuseppi, as the irreverent media call PM, is experiencing his metamorphosis into a James Bond with the license to kill, but he is careful not to express the slightest ability in solving international conspiracies as Ian Fleming’s beloved 007 of literature knew well. Fleming was British journalist, writer and military man well versed in the intrigues of MI6, the counterintelligence of His Majesty, royal heir of those Protestants who lit the fuse of the public explosion of Freemasonry in 1717.

After 27 reportages entitled CoronaVirus-BioArm and then WuhanGates, thanks to the authoritative scientific research published largely exclusively because the mainstream media do not even try to understand where Covid-19 was born, while those of counter-information float bizarre hypotheses, I have no doubt that this pandemic is the bastard daughter of an international conspiracy hatched by the occult powers of the Deep International State which is bringing to light and to the government, in maximum arrogant transparency, the New World Order announced when commodore of the Royal Canadian Navy, the high Catholic military officer William Guy Carr wrote his 1956 book, never translated into other languages, “Pawns in the game”.

Why be surprised, therefore, if Conte together with his gang of poor ministers (neurons only) receives a guarantee notice for a series of criminal offenses connected to the management of the Covid-19 emergency and, at the same time, a communication from the Rome Public Prosecutor’s Office which announces the request for acquittal?

Some might consider it idle and out of place to remember that the appointment of the new Roman prosecutor was at the center of the famous meeting between left-wing mgistrates and parliamentarians of the Democratic Party (now a supporter of the Conte Bis government) at the Champagne Hotel in Rome on May 9, 2019 which became the focal point of the now almost extinct PalamaraGate scandal.

Almost extinct because the wiretapping that has proven a political plot cannot be used against magistrates (Cassazione dixit) but not even with regard to those PD deputies such as Cosimo Maria Ferri who before entering the Chamber was three times Undersecretary for Justice ( with Prime Minister Letta, Renzi Gentiloni) and even before that a red toga, at least of shame for the shady plots in which he was caught with his hands in the dough.

Let’s stop for a moment synopsis, analogies and opinions and leave space for the news of ANSA, the main Italian press agency that has now become the official organ of globalism.

«The Prime Minister Conte and the Ministers Bonafede, Di Maio, Gualtieri, Guerini, Lamorgese and Speranza have received a notification regarding a notice pursuant to art. 6, paragraph 2, Const. n. 1/1989 by the Public Prosecutor’s Office at the Court of Rome. These are complaints concerning the management of the Covid emergency» wrote ANSA.

«The guarantee notice arises from several complaints presented throughout Italy in relation to the Coronavirus emergency and concerns various crimes. The reports, the details of which are not yet known, call into question the articles of the penal code on the penalty in competition (article 110), epidemic (article 438), culpable crimes against public health (article 452) and manslaughter (article 589), abuse of office (article 323), attack against the constitution of the state (article 283), attacks against the political rights of citizens (article 294)».

«The transmission by the Public Prosecutor to the College”, the court of ministers, “according to the provisions of the law, is a duty. In the specific case, this transmission was accompanied by a report in which the Public Prosecutor’s Office “considers the news of the text to be groundless and therefore to be archived”. This can be read in the note from Palazzo Chigi which announces that Prime Minister Conte and six ministers received a guarantee notice following complaints in relation to the Coronavirus emergency».

Ready, set, go… STOP! Despite the complaints concerning the most serious event that occurred in Italy after the First and Second World War, capable of causing almost 40 thousand victims and of obscuring a little even the memory of the long list of massacres still shrouded in mystery due to too many cover-ups (Portella della Ginestra, 1947 in Palermo, Via Fani and Murder Moro 1978 in Rome, Ustica and Bologna Station 1980, Capaci and Via d’Amelio, with the attacks on judges Giovanni Falcone and Paolo Borsellino in 1992), the judiciary with surprising skill has already gutted and found that there would not even be a shadow of crimes.

It is in practice the imprimatur of the magistrates that allows the government to continue its nefarious policy on the one hand fueled by social terrorism armed with masks everywhere and locker rooms prohibited on the beach and in the pool, and on the other hand protracted in heeding only the Scientific Technical Commission led by Dr. Walter Ricciardi whom Le Jene on Italian TV Italia1, well before us, proved to be overshadowed by sensational and very serious conflicts of interest.

Let’s not forget that this doctor is the Italian referent of the World Health Organization which was a global partner of the PREDICT 2 research funded by the Bill and Melinda Gates Foundation together with USAID, the American government agency used by the Central Intelligence Agency (CIA) especially during the terms of US President Barack Obama to foment revolutions for regime-change in the world: from the execution of Muhammar Gaddafi in Libya to the coup in Kiev against Ukrainian President Viktor Janukovyč.

The orange revolution in Ukraine culminated in the massacre of Maidan Square with over 100 deaths, including 20 policemen, by mercenary snipers in the pay of the Deep State, as later proved by an Italian reporter in a sensational and obscured investigation. Then Ukraine imitated Georgia by opening various laboratories for the testing of biological weapons managed by the Pentagon’s DTRA agency, thanks to the CIA control that made them impenetrable. Obviously, these are all just coincidences with the current pandemic…

The contents of the complaints against Prime Minister Conte’s gang for manslaughter, epidemic and various attacks related to the management of the Covid-19 emergency are not yet known. But there is no doubt that the judiciary did not consider it necessary to carry out the investigative work so far conducted by Gospa News.

On the one hand, we deepened the study on the origins of the virus that already 15 world-renowned scientists and even the former director of British counter-intelligence MI6 believe was built in the laboratory; on the other hand, we analyzed treatments ignored for weeks or months, which later proved to be useful in saving the lives of those infected with Covid-19, also known as SARS-Cov-2 in reference to the previous lethal strain of CoronaVirus from Severe Acute Respiratory Syndrome (acronym SARS from the English), which in 2003 killed at least 774 in China and other countries before the arrival of the “cousin” MERS, the similar Middle Eastern disease that spread in 2014.

Will the judiciary have entrusted a real epidemiology expert with minimal research on the nature of Covid-19 that the world-famous virologist Luc Montagnier, Nobel Prize Winner for Medicine in 2008, believes was built in the laboratory as a Genetically Modified Organism?

The Rome Public Prosecutor’s Office will have taken into consideration this hypothesis which in fact brings to mind the first experiments of SARS infected with HIV, the terrible AIDS virus, conducted since 2004 in Wuhan and Beijing thanks to the funding of the EPISARS project of the European Commission at the time. led by Romano Prodi, future prime minister in Italy with the Democratic Party that today governs and has expressed the ministers under investigation for the Covid-19 emergency?

Did the magistrates of the Capital listen to those luminaries of Italian medicine who suggested therapies that were later found to be effective in saving hundreds and thousands of human lives of the sick infected by the pandemic?

Why did the Ministry of Health and its task force fail to do what the small web media Gospa News achieved by interviewing authoritative doctors who have proposed effective treatments against this new and still mysterious (due to lack of suitable research) CoronaVirus genotype? (read more here)