[ Editor’s Note: We are taking a breather from the Beirut bombing story and Trump’s continued efforts to dominate the political dialogue with his bombastic claims. He is not the only politician using this tactic, as Salman Rafi Sheikh presents to us below.

Erdogan has stolen a page from the Trump playbook, who also stole it from Netanyahu, to always attack as a smokescreen to hide your weakness. As Rafi Sheikh points out, Erdogan’s economy had tanked before the pandemic and is worse now, so, like Trump, he needs some diversions to hold his base together.

As for international projection of power, he has simply gone on military offense with more overt Turkish aggression in Idlib province in Syria, and his invasion and occupation of Libya, which might have been paid for by the UAE, as Egypt never chips in money.

Americans can go along with its wars as long as they are fought by American volunteers and proxy foreign forces, which sadly include terrorist elements, something admitted by the former FM and OM of Qatar on the Charlie Rose Show. He gave up the ghost saying that the US Coalition had spent $160 billion dollars trying to overthrow and carve up Syria to destroy it as a country, a violation of a number of international laws. Imagine that.

Erdogan’s relations with Putin are mixed. Moscow has to worry about not being paid for its S-400s, which can now be held as blackmail to hand over to the US or NATO if Erdogan’s demands on Putin are not made.

On the other hand, Russian ex-military contractors are fighting beside Erdogan’s throwaway jihadi teenagers, who can die and be crippled by the boatload with no political blowback for Erdo back home.

He has done the same in Idlib and Kurdish areas along Syria’s borders, arming gangs of hoodlums to keep the SDF forces tied up and their population stressed with a low-level neverending war of shellings, farm crop burnings, private property looting, along with car and truck bombings and assassinations. That’s quite a foreign policy.

Back in the old days, Turkey would have a military coup when it had an inept president, but Erdo cleaned out everyone in the officer corps that had ever dreamed of a coup after the last failed attempt.

Casual labor for Turks in the EU has dropped way off, which might trigger a flow back home to Turkey of angry, unemployed Turks who have tasted a better life in countries not openly run by gangsters. Their ranks could strengthen the Turkish opposition, but who knows if it would make a difference.

The bottom line politically is that, after the drubbing Erdo took in the last elections in losing a number of key metropolitan areas, an enhanced replay of that scenario could be his last. If he saw he was going to lose, he would create an incident to save himself.

We have a presidential contender that I suspect has been looking at similar options. Similar to a scenario of Trump losing, Erdogan could face endless litigation for his corruption and looting while in office.

On the plus, the side he has kept the military with him by using refugee camp militia young people, and expendable jihadis to fight and die in Syria to keep his own troops out of harm’s way… Jim W. Dean ] 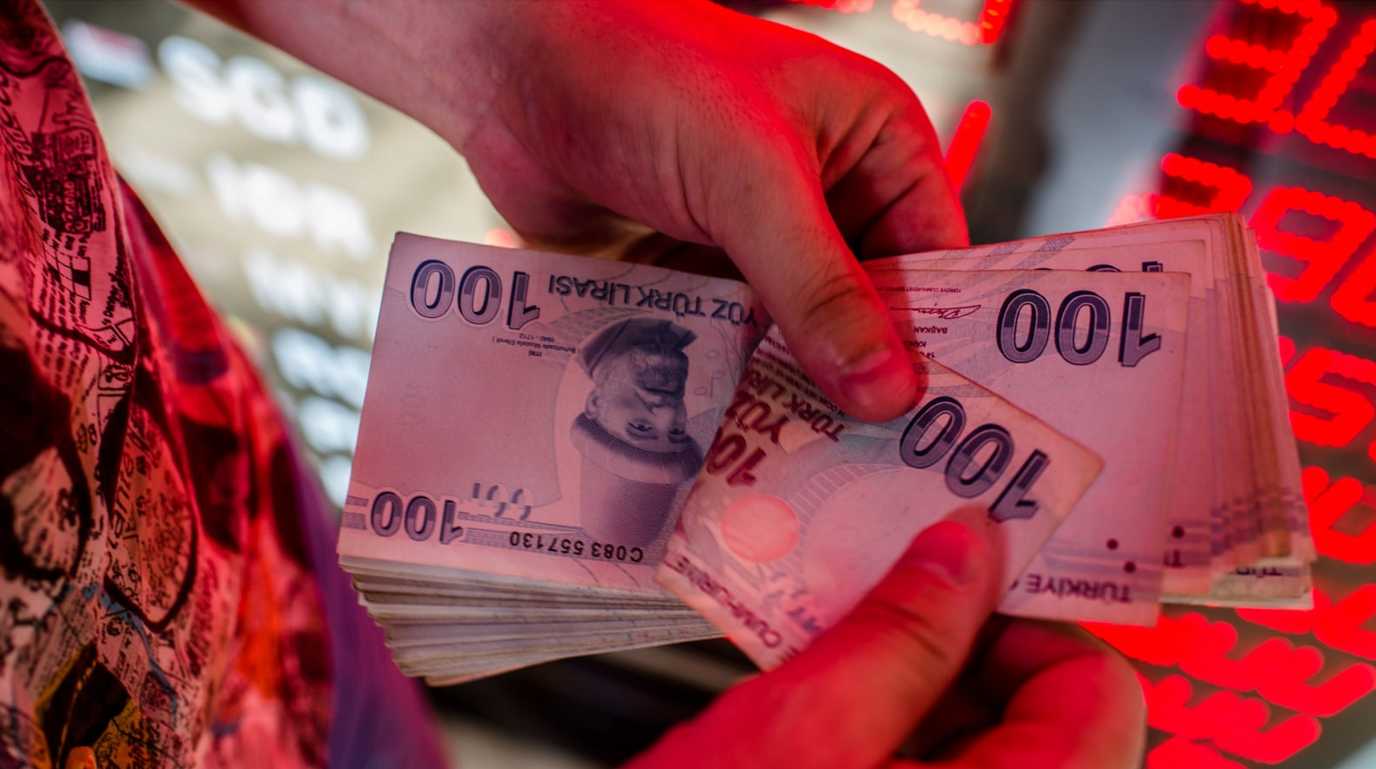 Turkish lira, as of recently, has been in a freefall, indicating the overall health of the Turkish economy. Since the beginning of 2020, Lira has fallen by 20 percent against the US dollar. Its adverse impact on the economy and politics has, however, been largely absorbed by the euphoria of Hagia Sophia and the intense symbolism of return to Ottoman glory.

Whereas Turkey’s Erdogan blamed the pandemic and Beirut explosion for the recent devaluation, Turkey’s economy was already on the verge of collapse even before the pandemic hit Turkey. As it stands, the Turkish central bank has lost almost a third of its foreign exchange reserves this year, despite heavy foreign-currency borrowings from Turkish banks to artificially boost reserve numbers.

Coupled with Erdogan’s stunning defeat in elections last year, when his party lost control of major municipalities, including the capital Ankara and commercial hub Istanbul, the on-going economic crunch was already hitting the self-styled ‘neo-Ottoman’ leader in his face when he decided to convert Hagia Sophia, a cathedral-tuned-museum, into a mosque.

Surely, Turkey was in no dire need of mosques. Just a year ago, Erdogan inaugurated the Çamlıca Mosque on the Asian side of Istanbul—a huge complex designed to accommodate more than 60,000 worshippers per day.

Certainly, Hagia Sophia was not converted into a mosque to accommodate more faithful worshippers; the conversion was/is meant to give a religion-nationalist boost to the domestic political landscape to help Erdogan raise his political stature above the dwindling economy and Turkey’s costly external interventions in Libya and Syria.

Indeed, just when the pandemic was only beginning to spread in Turkey, Turkey’s economy was in tatters, forcing Ankara, lacking the essential funds to provide a meaningful social shield against the economic fallout of the pandemic, to launch a campaign to collect donations from the public.

The fact that these measures have failed to put the economy back on track and that a dwindling economy does not bode well for Erdogan’s political future also explains why the regime has not decided to knock on the IMF’s door.

Already, about 85 countries have gone to the IMF for bailout packages due to the adverse impact of the pandemic on their economies. Going to the IMF at this stage when the official narrative continues to paint Turkey as a ‘strong economy’ would have been self-defeating.

Indeed, Erdogan and his Justice and Development Party (AKP) have long maligned their predecessors for borrowing from the IMF, depicting a new, economically strong Turkey that no longer needs the IMF support.

While the AKP regime would not go to the IMF, there is no gainsaying that a continued economic fall will have severe political implications for Erdogan, allowing the opposition to rally people against him; hence, Erdogan’s increasing resort to populism to buttress his falling fortunes and create a smokescreen of ‘Ottoman glory.’

As such, by projecting this conversion as a ‘reconquering’ and a ‘great victory’ and calling ‘Al-Aqsa’ mosque as the next target, Erdogan underscored the political message of creating a ‘neo-Ottoman’ territory that goes beyond Turkey’s current territorial borders. Indeed, the Erdogan regime has also been projecting Turkey’s foreign interventions, particularly in Libya, as the key to reclaiming the lost ‘Ottoman glory.’

The drive towards reclaiming the lost glory is rooted in Erdogan’s brand of Turkish nationalism and the way he diffuses it with religion. Hagia Sophia’s conversion, in this context, symbolizes the increasing rise of religious forces in Turkey and the hegemony of the practitioners of a particular brand of faith.

Indeed, while a lot of Western countries were quick in their criticism of the move, Erdogan was clever enough to even use this criticism to his advantage to pitch even more effectively his ‘neo-Ottoman’ credentials to his voters.

Indeed, popular media pundits close to the regime have equally been investing their time and energy in glorifying this conversion as the revival of the lost glory. For Yusuf Kaplan, this conversion shows,

“Turkey’s recovery, reclaim of its identity, history and spirit, its mental liberation…The re-opening of the Hagia Sophia Mosque is the spark that will trigger the great journey we have been called upon so that we can escape the web spun by the West – and which we had entered voluntarily – to build the new age…”

The rhetoric speaks a lot of populism whereby Turkey is projected as “going away” from the west, even though the same regime continues to pitch to the US ideas to create a global supply route to counter China. These ideas show a desire far deeper engagement with the West than a calculated distance.

For Erdogan and AKP, this conversion is also the key to Turkey’s leadership in the Muslim world. Indeed, this is how the regime is speaking to its voters.

“The conversion of Hagia Sophia signifies that Turkey will rise to the position of a founding country that will a kick-start a new age, build a new age, lead the Islamic world in the establishment of a new world, and the declaration to the whole world that Turkey is the only country that can achieve this”, wrote Kaplan.

This is Erdogan’s populist political strategy that he intends to use to counter political opposition which was able to focus their campaign entirely on the questions of economic development and corruption in the AKP to defeat the ruling party in Istanbul elections twice.

For the opposition parties, the task will now be to focus on the regime’s economic and political performance than this conversion, which is anyway is a ‘popular’ measure, to build a strong counter-narrative.