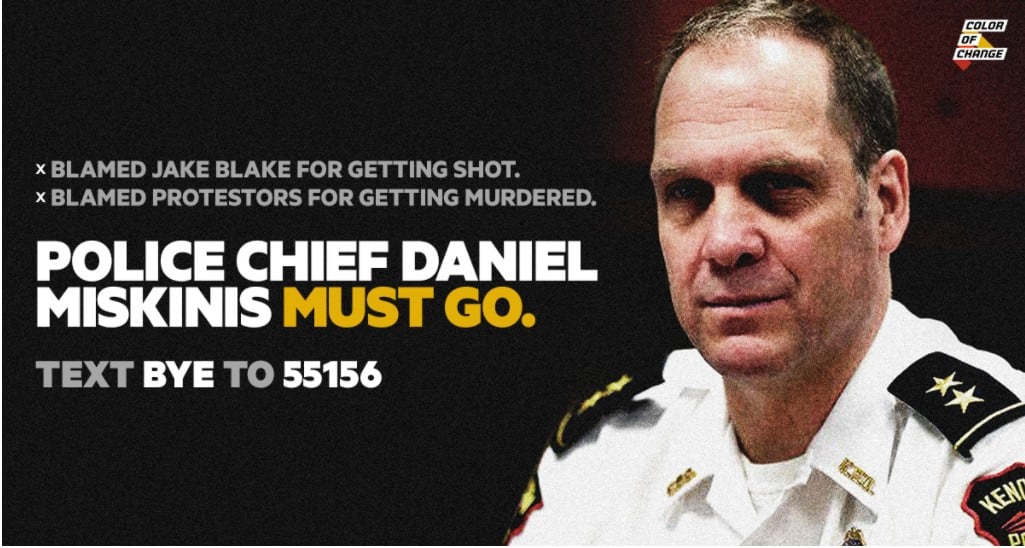 Just days after the Kenosha police department shot Jake Blake seven times in the back, a white supremacist vigilante came into town to murder two anti-racist protesters. The officer still has his job and police let the racist murderer walk away. Kenosha police chief Daniel Miskinis has blood on his hands. He must be fired ASAP. Sign the petition.

Kyle Rittenhouse, a vocal white supremacist and Trump supporter, who was obsessed with guns and dreamed of being a cop, traveled across state lines with an AR-15 style rifle strapped across his body. For hours, he stalked and harrassed anti-racist protesters while “protecting”  property that wasn’t even his. His hate-filled night ended by him murdering two protesters and leaving one badly injured. His last victim will likely lose his arm.

And how did Kenosha police officers and the national guard respond to him? They let him walk away. And just before the shooting as he harassed protesters, they gave him water, and thanked him for protecting them.

The police chief Daniel Miskinis even blamed the protesters for being murdered by a vigilante. When a reporter asked him about the murders of two protesters, Miskinis’ vile words speak for themselves: “Had persons not been out involved in violation of [the curfew], perhaps the situation that unfolded would not have happened.”

Chief Miskinis words are disgusting and indicative of the department he runs. Not only does he oversee the department that attempted to murder Jake Blake, but he’s ordered his officers to teargas protesters and let a racist murderer walk free.

Mayor John Antaramian and the Kenosha City Council must fire him immediately.

After Jake Blake was shot seven times in the back in front of his three small children, Chief Miskinis went on record blaming Jake for getting shot. The police even handcuffed Jake to his hospital bed as he fought for his life — disgrace!3

Miskinis repeatedly attempts to smear victims of his police department and the white vigilantes who carry out their anti-Black agenda. We know what this game play is and we’ve seen it before. A police officer brutalizes or murders someone, so the police department goes on a smear campaign against the victim to clear any wrongdoing. But we won’t stand for it.

These violent acts of racism are emboldened by people in positions of power like Chief Maskinis. By excusing Kyle’s behavior, Miskinis is opening the door for this very act to happen once again. And Black people, and those fighting for justice, will once again be the victims.

We don’t look to police chiefs to be beacons of justice, because they represent an inherently unjust institution. We must hold them accountable for the danger they put our communities in. And as long as Chief Miskinis continues to allow blatant white supremacy to take Black lives and our anti-racist allies, Black Kenoshans are not safe while he’s in a position of power.