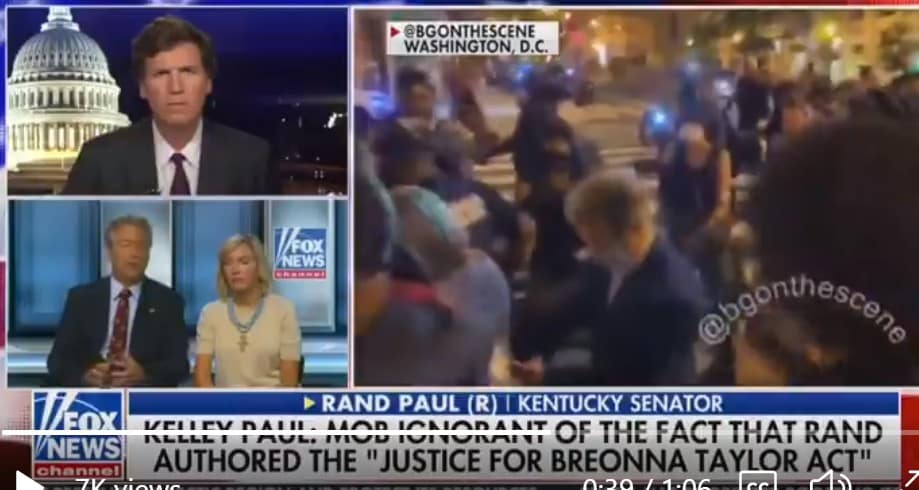 Rand Paul was a Trump hater.  Always a prissy little bitch with the masculinity of a detuned Lindsay Graham, Paul for reasons unknown but now guessed at, in the wake of the Jerry Falwell revelations, was caught doing something or someone, perhaps “some thing” to or with “some thing.”

Here in Michigan, over 100 militiamen with assault weapons surrounded our governor’s home in Okemos, Michigan. More than screaming went on but our 40 something female governor never said a word, never went crying to the press, and pulled down Michigan’s COVID numbers allowing the state to mostly reopen in June.

Michigan is enjoying the end of a massive tourist season with up to one million out of state visitors each weekend, restaurants open, beaches open…which two dozen red states are locked down.

Rand Paul is a fucking coward.

Exactly what I said! Total photo op. Kyle Rittrnhouse murders ppl w a murder weapon, crickets from filthy right. Vocal Americans surround wimpy coward provocateur Rand Paul, omg he was attacked despite not being injured or shot in back 7 times while handcuffed to hospital bed.

Rand Paul is a whiny coward. I guess he will try to sue the protesters. We have a video we know you were not attacked.
He makes me ashamed to be a Kentuckian. You said it very well. https://t.co/Y18AzpHsLc

.@RandPaul: "I truly believe we would have been killed.

No. The police saved our lives because these thugs would have killed us. They would have stomped us and killed us." pic.twitter.com/EekGn1NSPj

VT has the Tucker Carlson edit and the Zionist Examiners tweet but the video tells the truth:

Angry white demonstrators, very very few, demanded Rand Paul to answer for his silence on a police murder in his home state.  Watch the video.

Trumpers assault protesters and run away like cowards but yelling at rand Paul causes panic among the right?! Lol

Paul is as you can hear, a delusional chickenshit lying piece of shit.

Rand Paul is a coward through and through, too afraid to speak to the protestors. Why? They only wanted answers. This proves he is only interested in talking to his TrumpCult, White Supremacist base. https://t.co/VK1CIngySH

A disheveled man, caught on video afraid of peaceful protesters who were calling out his racism.

A coward who hates himself for being a coward has to project blame. This is what they look like. Look at his hair. The fear on his face. How pitiful.

@RandPaul You’re a liar no one was trying to push anybody to get to you. Without your white supremacists around you, you felt like a coward, and likely so. Don’t lie trying to kill you, please coward. That’s why you didn’t want lynching reform #JusticeforBreonnaTalyor pic.twitter.com/DVlFwlUxv9

Still laughing at Rand Paul calling that “a violent mob.” Bullies and the people who support them are, to a person, cowards.

Little white elitist Rand Paul claims he was "attacked" by a mob after the illegal convention.. if you hadn't been at an illegal convention, you wouldn't have been able to claim like a coward you were attacked. All Trump followers are constant victims!