[ Editor’s Note: Usually the Debate Show will cover a specific story, often for that day, on an ongoing war or geopolitical situation. But the booker told me this would cover all the issues with China and the US.

Right away I thought that a half-hour beats five minutes on a New Review to cover a topic, but ALL of the topics between these two giants was going to be a challenge.

One never knows if the host is going to have specific questions or start with open-ended ones and they ask follow-ups. But this show was not a problem, as we have been doing shows on these issues for a couple of years.

As a guy named Jim Dean had said when Trump got elected, he was going to run the White House like a reality TV show, as he felt that was his magic, and why not stick to what had worked for him. He viewed himself as a god, the Peter Pan of TV and now Twitter.

I think time has shown me to have been correct. He hogs the microphone, replaces ‘knowing’ with whatever he thinks at the moment, and if, at a loss for words, he repeats what he just said, while dreaming up something else.

The main points on this show were that nothing would be done with China until after the election, so Peking can at least know who it will be dealing with. To make any deal now with Trump would be the height of folly, and these are not funny times … JD ] 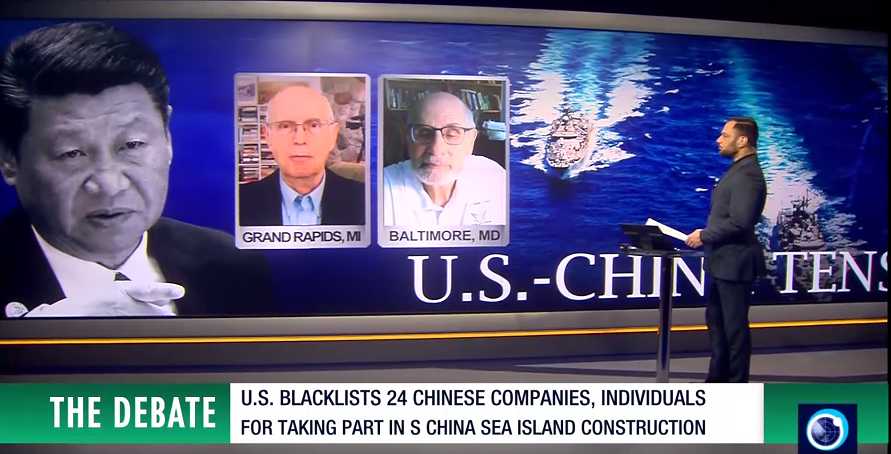 Washington and Beijing are currently at loggerheads over a host of issues namely trade, technology, Hong Kong, Taiwan, navigation in the East and South China Seas, and most recently, the coronavirus pandemic.

The South China Sea though has become a flashpoint as of late, as the United States has been trying to push back against what it views as China’s rising influence in the resource-rich area.

Washington frequently sides with China’s rivals in maritime disputes in the sea and has been routinely sending warships and warplanes there to assert what it calls its right to freedom of navigation.

As Washington ramps up hostile posturing against Beijing, China’s Defense Ministry says the country will not “dance to the tune” of the US or allow it to “cause trouble”.

Diplomatic relations between Washington and Beijing have dropped to the lowest level in decades since Donald Trump has taken, but who benefits from this escalation of tensions?