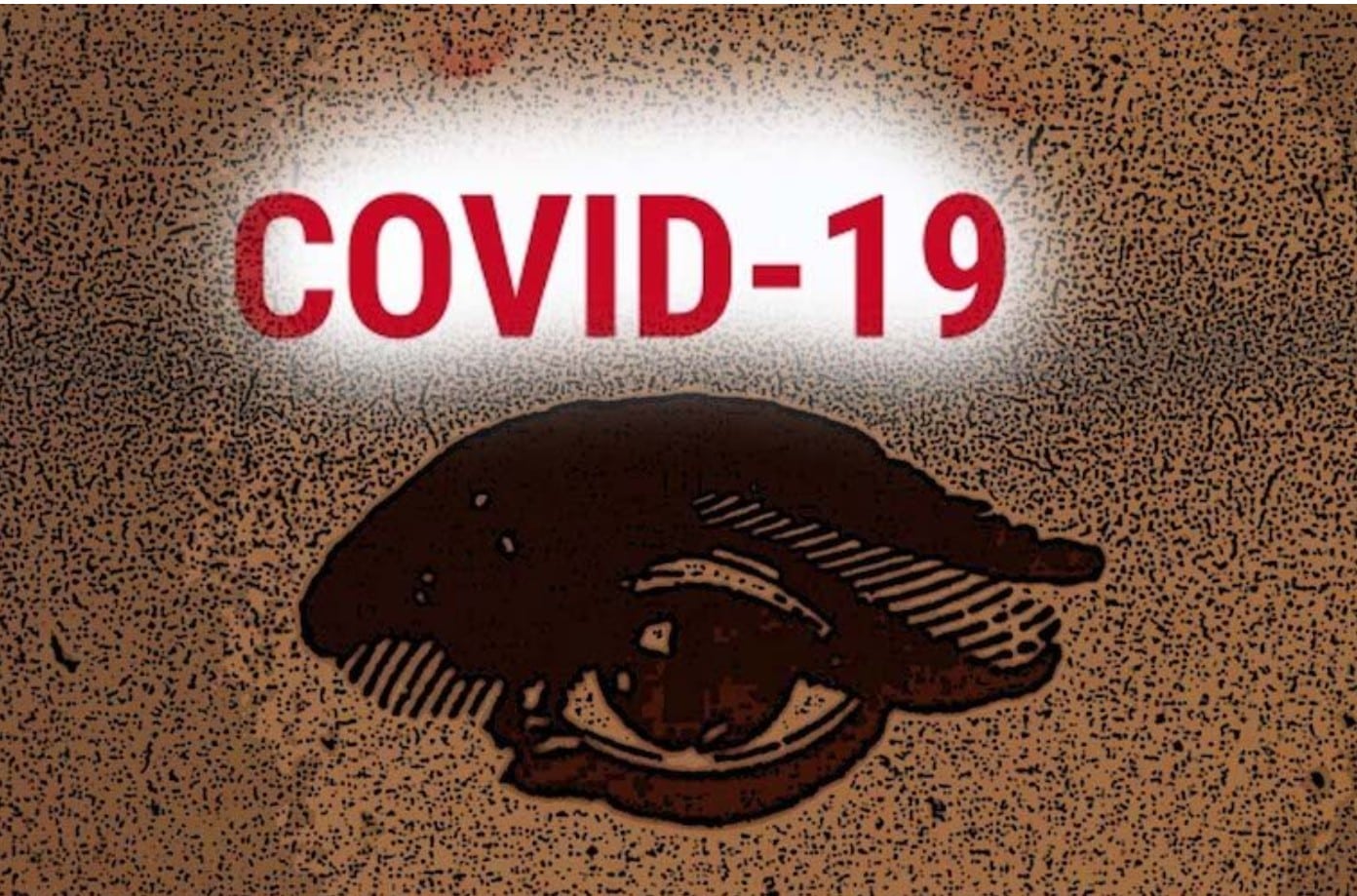 At a time of health crisis one would expect to see an open global scholarly, multi disciplinary debate among scientists, scholars from different fields, politicians and finance experts. Not only does such a discourse not exist, what we have seen instead is a crude attempt to eradicate any such exchange. It isn’t our governments that interfere with this crucial discourse:  it isn’t Trump or the FBI that deleted seven million FB posts that didn’t agree with the World Health Organisation’s narrative. It wasn’t the Tories or Boris Johnson who erased thousands of salient videos from Youtube. It has been the work of the giant technology companies operating in concert to silence dissenting views.

By now we are used to the idea that telling the truth about Israel and its lobby provokes severe authoritarian reactions, and it took us just a few days into the current Covid-19 pandemic to grasp that dissent from the official Corona virus narrative elicits similar drastic responses. One may want to question what Covid-19 and Israel have in common.

The outcome has been devastating. Six months into the ‘crisis,’ we still know very little about the virus we are told threatens us all.

Not only may many people have died ‘with Covid-19,’ science itself has been murdered by a deadly virus.  What we have seen in the last six months is a complete eradication of the Western scientific and cultural ethos. 3000 years of Western tradition have been replaced by money driven culture that fakes images of scientific thought.

Instead of asking what is it that endangers some segments of the population, our health institutions and corporations are concerned with one simple question:

How do we translate Covid-19 into a cash machine?

Instead of scientists debating the most crucial issues to do with a well-advertised global health hazard, start-ups are competing amongst themselves in a desperate vaccine contest, we see Wall Street rising by hundreds of billions exploiting the confusion. We witness Amazon extending its global monopoly while smaller retailers are falling like flies, and during this time, technology companies have shown us their true nature and purpose. The truth can’t be denied, Google is not a search engine, it is an Orwellian indoctrination apparatus, big brother 2020. FB, and Twitter are not social networks, they are actually anti-social filters. They gate-keep that which you are not allowed to say or think, but surely start to grasp.

Bizarrely enough, none of this is new. The warnings about this authoritarian shift were predicted by many including yours truly. Orwell saw it coming as early as 1948 or perhaps in 1936 while fighting in Catalonia.  But the context of this draconian twist was probably defined best decades ago by the great philosophers, Otto Weininger and Martin Heidegger.

In the early twentieth century, the Austrian philosopher Otto Weininger realised that medical science was about to lose its holistic understanding of the human body as an organism and had begun to see a collection of organs instead. Weininger saw that medical science was destined to morph into  “a matter of drugs, a mere administration of chemicals.” Weininger, Jewish by origin, was one of the most critical voices of Jewish culture and ideology. In his book, ‘Sex and Character,’ he unleashed an unprecedented attack on Jewish culture and its impact on medical science and scientific thought in general. I do not have any doubt that his words may offend some people however, it is clear that the non-organic, anti-holistic approach to medicine extends way beyond the limited realm of ‘Jewish doctors.’

Weininger wrote the following in 1903:

“The present turn of medical science is largely due to the influence of the Jews, who in such numbers have embraced the medical profession. From the earliest times, until the dominance of the Jews, medicine was closely allied with religion. But now they would make it a matter of drugs, a mere administration of chemicals. But it can never be that the organic will be explained by the inorganic. Fechner and Preyer were right when they said that death came from life, not life from death… We should return from this Judaistic science to the nobler conceptions of Copernicus and Galileo, Kepler and Euler, Newton and Linnceus, Lamarck and Faraday, Sprengel and Cuvier. The freethinkers of to-day, soulless and not believing in the soul, are incapable of filling the places of these great men and of reverently realising the presence of intrinsic secrets in nature.” (Sex and Character, Otto Weininger pg 315)

Weininger didn’t pull his punches in his criticism of his fellow Jews. He wanted science to be emancipated from an emerging materialist paradigm that was hostile to his understanding of the meaning of being in the world. Otto Weininger, who was one of the most influential thinkers during the first half of the 20th century, is unknown to most contemporary thinkers. His genius, however controversial, has been largely eradicated by those who control our public discourse.

Heidegger’s lecture,  ‘The Question Concerning Technology’ (1954) was published five decades after Otto Weininger’s ‘Sex and Character’ saw daylight. In between the two literary events, the world experienced two world wars, a communist revolution, mass genocide campaigns that were technologically and industrially inspired and driven, the car was born as was aviation and the computer, the atomic bomb and a cold war.

Heidegger saw technology primarily as a mode of revelation. Through technology, things unveil themselves to us to the extent that we learn about the world around us, but also about our role, meaning, limitations and destiny in the world. Technology, as such, has made the world in which we live and provides a window into the meaning of Being.

But modern technology, according to Heidegger, introduced a change in the duality between man and the universe. Rather than revealing and unveiling the world to us, technology has mutated into a mode of exploitation that sustains the world in being somehow inaccessible to us.

Heidegger observed that because of technology, “all distances in time and space are shrinking…yet the hasty setting aside of all distances brings no nearness; for nearness does not consist in a small amount of distance.”

Despite rapid advances in technology, we do not experience this ‘nearness,’ let alone understand it.  Instead of a gradual understanding as items manifest themselves to us as technological, we see them and treat them as what Heidegger calls a ‘standing reserve:’ supplies and exhibits in a showroom or a warehouse. The world is becoming a collection of technological items, gadgets, pieces of inventory to be ordered, conscripted, consumed, digested, uploaded, streamed, assembled and disassembled. Everything approaches us merely as a source of energy or as something we must organize or purchase. We treat even human capabilities and illnesses as though they were only the means for technological procedures and instruments for production.

This is what Covid-19 is and this is exactly where we are with the ostensible health threat. Even before we could realise what covid-19 is, it was reduced into a technological asset, an Heideggerian ‘standing reserve’. Whether it is the mask debate, future vaccinations or ventilators, Covid 19 morphed into a ‘cash machine’ as much as a health risk.

If Covid-19 and the technology involved is a mode of revelation, it reveals little about the health crisis, but tells a lot about us and what we are not willing to admit about ourselves. We are now, in fact, removed from the Western Athenian ethos that subscribes to pluralism, openness and, most important, a relentless and OPEN search for truth in wisdom. We seem pretty happily occupied by the so-called Jerusalem way of thinking. We are delighted to be fearful and accept being terrorised by repeated apocalyptic scenarios. We seem to follow anyone who strips us of our elementary rights.  We accept suppression of free thinking, until further notice, we prefer to follow laws, regulations and ‘mitzvoth.’* In such a world, Heidegger and Weininger are public enemies. Orwell and his prophecy are not going to be part of our Western education curriculum for much longer.

Covid19 has revealed to us that we are not as free as we may have believed, and the only question left open is whether we, the people, can rise again, and when?

*By ‘mitzvoth’ (plural) I refer to orders, rules, commandments that do not necessarily follow any scientific or rational reasoning. In Judaism mitzvah (singular) refers to a commandment ordered by God to be performed as a religious duty. As such, the purpose of any given Mitzvah cannot be challenged as it is grounded on a decree made by a higher order.