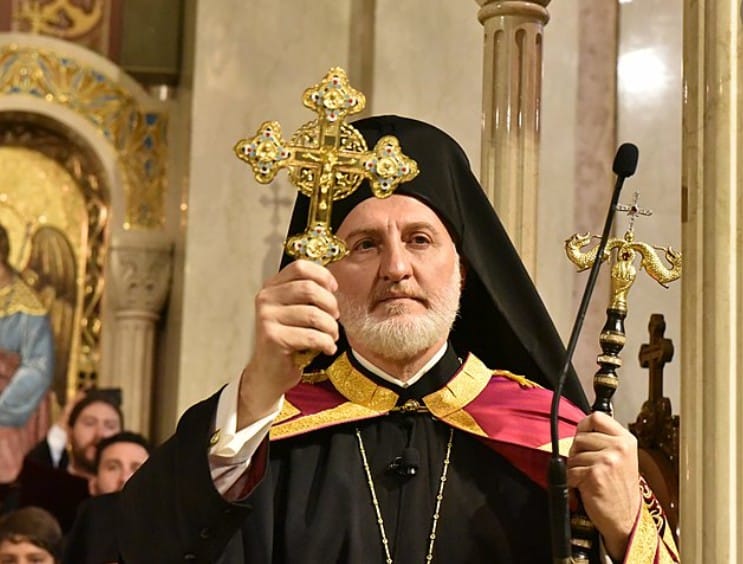 By Sophia Illiadi for VT

Archbishop Elpidophoros was said to have cut short his trip to Istanbul on August 22 and returned to the USA due to protests in the Greek Orthodox Archdiocese of America (GOA) against the proposed pension reform that may be adopted at the upcoming Clergy-Laity Congress (September 9-10).

However, he did show up anyhow in the Phanar on August 31 to baptize a Ukrainian PM’s child and was present at the Feast of Indiction as expected.

The Archbishop departed to Istanbul on August 16. According to recent comments from the Archdiocese, His Eminence’s visit will last until September 5.

In the meanwhile, on August 31, the Orthodox Times website went to deal with questions about the Archbishop’s presence at the 2020 Democratic National Convention.

During his stay in Turkey, on August 19, his video address was shown to the participants of the Democratic National Convention.

“Let us pray. Most merciful and loving God, as we gather in soberness of mind and of heart for the sake of our nation and its future, we pray that You would shine the light of Your countenance upon the delegates of this convention, and upon Vice President Joe Biden for the highest office in the land. As we face the future as one American nation, bring us to our best selves and inspire our better angels, in peace, in fairness, and in generosity, that we may fight against injustice, inequality, and hatred, that we may achieve a common good, a greater good in the name of the Holy Trinity we pray. Amen,” — Ekathimerini quotes the message.

Even if the Archbishop’s only interest really is “the election of this candidate who will promote the rights of the Ecumenical Patriarchate” and his blessing does not mean endorsement, reasons behind his absence at the Republican National Convention still remain unclear.

First, the Orthodox Times wrote with reference to “people close to Archbishop Elpidophoros” that he did not attend the Republican National Convention, not because he endorses the Democrats but because he was not invited.

In a few days, the Orthodox Times quoted the comment of Archdiocese’s spokesperson, Father Evagoras Konstantinidis, to Anamniseis.net, from which it emerged that “Archbishop Elpidophoros of America was invited to offer a prayer and speak at the Republican National Convention, but could not attend it because he was on a visit to the Phanar at the Ecumenical Patriarchate in Constantinople”.

And still, it’s a lame excuse, because we all know that his appearance with the Democrats was pre-recorded, just as the one of Cardinal Dolan with the Republicans was. So what kept him from following the four-decade old tradition, even through a videotaped message?

Moreover, while the Orthodox Times acknowledges that “this situation was unfavorably commented by Greek diaspora online media”, the Archbishop’s open support for Democratic Party presidential candidate is much criticized not only for politicization of American Orthodoxy but also for the reason that Biden’s political program promotes abortions and LGBTI which contradict the Gospel.

It would have been really wise of the GOA primate to return to his business and hopefully reconsider his strategy instead of wasting his time in lame excuses and hollow words of loyalty to the Ecumenical Throne. Every minute counts for His Eminence, because there is much more to it why many in America and in the Phanar may be disenchanted with him.

“It’s not for nothing Archbishop Elpidophoros is so fond of Democrats,” – they would say, – “he changed his line after the enthronement exactly as Barack Obama did when he came to the White House.”

It’s a matter of fact that now His Eminence is acting just contrary to his early promises to Ecumenical Patriarch. It wasn’t his name meaning, the bringer of hope, why he became the GOA primate. He was promoted to the American Throne with a number of specific tasks:

– to heal the Archdiocese’s finances and calm down the scandals concerning the mal-administration, corruption and embezzlement of about $500,000 from the budget for the construction of the St. Nicholas National Shrine in New York;

– to maintain and increase financial support to the Mother Church from the GOA and the Greek-American community;

– to increase mutual understanding between the hierarchs and the clergy of the GOA;

– to secure political support to the Ecumenical Patriarchate from the US establishment, especially in light of the difficulties facing the Mother Church in Turkey.

As a well-educated, multilingual and urbane hierarch, His Eminence Elpidophoros could certainly make a go of it. However, his policy is leading to the opposite effect.

The turmoil around the St. Nicholas Cathedral didn’t stop, the federal investigation is still going on.

GOA financial situation remains unstable, and the Archbishop has decided nothing better than to retire worthy clerics, cut pensions and sell church properties. The explanations he gives to the clergy are unconvincing at best and misleading at worst.

Still shrouded in mystery are the sudden deaths of four clerics that occurred over several months in the Metropolis of Chicago. Suspiciously, all of the clergymen used to openly criticize the new Archbishop. Of course, that doesn’t necessarily mean His Eminence is involved. Yet, the question arises why, contrary to the usual custom, there was no mention whatever on Archdiocese’s website about their demise, though the deceased were enough famous priests with quite a large flock.

Then, although the annual support to the Mother Church has been increased from a million to $1.5 million according to the Archdiocese 2020 budget, in fact it has ceased. This complicated the plight of Ecumenical Patriarchate in pandemic Turkey even further.

As to political support from the USA, after Elpidophoros’ marching with anti-Trump BLM protesters, who, by the way, soon revealed their antichristian ethos as well, and blessing Democratic candidates, it’s no wonder this mission has also failed.

Though after several failed attempts His Eminence managed to gain a short ceremonial meeting with President Trump, it didn’t help to defend the Hagia Sophia.

At that, Elpidophoros’ unreserved support for democratic candidate Biden at presidential elections seems to be the most unreasonable and scandalous thing in the GOA primate’s activity. The main rule of the Ecumenical Patrairchate’s policy in the USA was to maintain high level of relationship with any White House Administration regardless of its party affiliation. What is important to the Church is an outcome, not the partisanship. For many years Rev. Fr. Alex Karloutsos, an irreplaceable intermediary between Patriarch Bartholomew and the White House, has been implementing this principle with wisdom and expertise.

For example, it was due to his efforts for the sake of defending the Hagia Sophia that Donald Trump has finally received Archbishop Elpidophoros. And it is to be regretted that His Eminence’s slanted policy and unadvised all-eggs-in-one-basket approach resulted in the Hagia Sophia and Monastery of Chora being converted to mosques.

Perhaps, someone has convinced Archbishop Elpidophoros that Trump has no chance to win the election and Biden will be the next president. For example, Archdeacon John Chryssavgis, who is known in the GOA for his Democratic preferences, might do that. However, even if Biden is elected, will the victory of Democrats be good for the Church? Fat chance.

Remember, during Barack Obama’s presidency, there were only two meetings with His All-Holiness — once in the USA and another time in Istanbul, – which were rather ceremonial than substantial. Nevertheless, in the heat of presidential campaigns the new GOA primate put all the political capital of the Ecumenical Patriarchate in the USA, which is of vital importance to the Greek minority in Turkey, at stake. That’s why the Archbishop’s political activity raises a lot of discontent among believers, clerics and hierarchs.

Moreover, it’s difficult to find any reasonable explanation for the attitude of His Eminence. Some may suppose he is just unexperienced and short-sighted in politics and Church management. However, for those who remember Metropolitan Elpidophoros, it’s hard to believe in that.

And it’s far more difficult to believe that His Eminence sees his service in America not as his sacred duty to the Church and the flock, but merely as a stepping stone to the Ecumenical Throne, hoping that Biden’s election will give him momentum, and that’s why he should fight for Democrats to win at all costs.

All that remains is to pray for Patriarch Bartholomew’s wisdom and vision, and try to communicate to the Archbishop the dangers of politically biased administration, the need for obedience to the Mother Church and dialog with the laity, clergy and hierarchy.