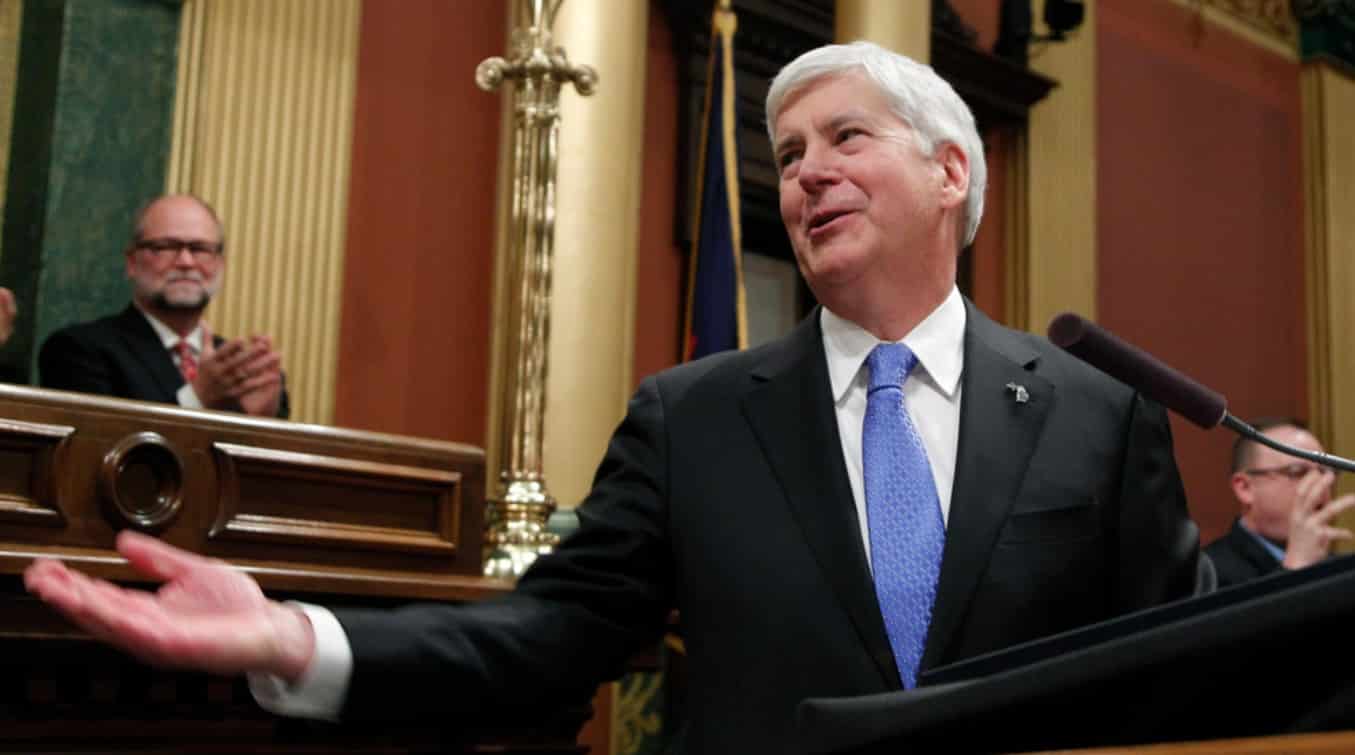 The Republican former governor of Michigan, Rick Snyder, has endorsed Joe Biden while savaging President Donald Trump for being a bully, having no moral compass, and ignoring the truth.

In an opinion piece for USA Today, Snyder wrote that Trump has failed to unite the nation and said:

“President Trump’s answer to people who oppose or disagree with them is to be verbally abusive. In other words, he is a bully… As a proud nerd, I had to deal with bullies over many years; it is tragedy watching our world suffer from one.”

Conversely, he praised Biden for having the “desire to heal a deeply divided nation,” and said the Democrat “has demonstrated strong moral character and empathy; and he seems willing to listen to people who have different perspectives from his own.”  His full statement in a Detroit Free Press opinion piece:

“Forty-four years ago, I celebrated my 18th birthday at the 1976 Republican National Convention as part of Gerald Ford’s national youth group. At that convention, I had the honor to watch two great leaders in action — Gerald Ford and Ronald Reagan. I have remained a lifelong Republican and proudly announced Michigan’s support for Mitt Romney in 2012 from the front row of the Republican convention in Tampa.

I will continue to support and stand up for Republican policies and values, and support Republican candidates, but I will not support Donald Trump for reelection.

Trump has not unified the nation

When elected to office, you do not represent only your supporters, you represent all of your constituents. That is your job. I was at the nation’s Capitol when Trump gave his inaugural address. I had hoped this first speech as president would be a message to unify a divided nation. Instead, I heard a speech directed at how he would help the people who supported him. And sadly, that is how President Trump continues to govern.

Furthermore, President Trump’s answer to people who oppose or disagree with them is to be verbally abusive. In other words, he is a bully.

A great leader treats people with respect even when they present different opinions. Without a variety of views and opinions, we would have no innovation or creativity in our nation. Being a bully and being strong are not the same thing. Being strong is standing up for your convictions. Being a bully is trying to intimidate those who are perceived to be weaker or a threat. As a proud nerd, I had to deal with bullies over many years; it is tragedy watching our world suffer from one.

In addition, President Trump lacks a moral compass. He ignores the truth.

Facts and science matter. Good decisions should be based on facts and supported by sound scientific theory whenever possible.

President Trump also has demonstrated that he does not fully appreciate public policy matters, including public health, the economy and foreign relations, nor does he seem to want to learn.

While we have had a strong economy during his term, it reminds me of the old expression that it is better to be lucky than smart. Some regulatory reforms have been helpful. But his tax reform was a failure. It didn’t have real long-term value, enriched large corporations and violated the basic principles of good tax reform to be simple, fair, and efficient. In the foreign policy area, there have been some good agreements, but overall, our nation is no longer respected as a leader on world affairs.

Not supporting Donald Trump for reelection is not the same thing as voting for Joe Biden.

Bringing back civility to the nation

I had the opportunity to interact with Mr. Biden when he served as vice president. My interactions were always constructive and respectful. He has shown the desire to heal a deeply divided nation; has demonstrated strong moral character and empathy; and he seems willing to listen to people who have different perspectives from his own.

For years, I mentioned in most of my speeches the need to bring back civility to our nation. We will not continue to be the greatest nation in the world if we can’t get along among ourselves. We have only become more divided over the past four years. We need a leader who believes in civility and bringing Americans closer together.

While I am endorsing Joe Biden for president, I am still a Republican who also will be publicly supporting Republican candidates at the local, state and federal level.

Voting for Biden:I never thought I would leave the Republican Party, but I’m voting Biden-Harris this fall

My weekly column signoff is — “Remember, Relentless Positive Action (RPA) in your life will help you and others. So, I wish you RPA every day!” RPA is a philosophy of no credit, no blame, and solving problems in a relentless fashion. Never in our nation’s history have we needed RPA more. I hope you will join me and help others by using Relentless Positive Action to elect Joe Biden as America’s next president.