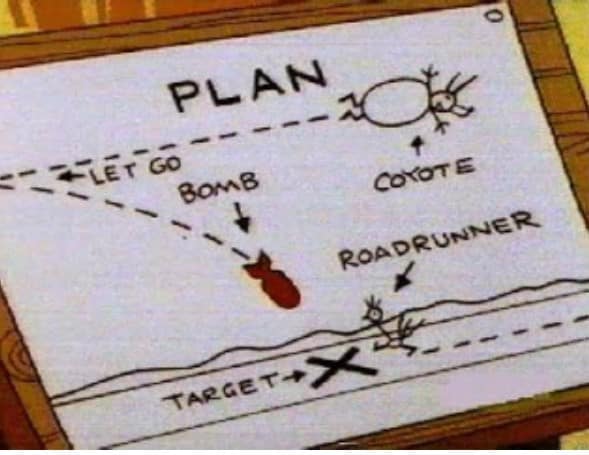 Editor’s note:  Were these not cartoon characters and the entire story an allegory, were you to actually read this and grasp its intent, someone might actually have to shoot you.
We, of course, are kidding.  No sane person would publish something this classified.  Then again, why would basic laws of physics be classified.  Doing so would derail human history on behalf of greed.  That would be criminally insane.

The other day Dr. Wile E. Coyote and his trusted lab assistant Elmer Thud, both well known in the field of cartoon particle physics, decided that they were going to design and build a Neutron based Ray gun just like the one of Star Trek fame called the “phaser”. They were doing this so they could use it to eliminate there arch enemies Bugs Bunny and the Road Runner.

It also makes a great microwave oven for cooking your lunch. Dr. Coyote along with the help of his brilliant assistant and former rocket scientist Dr. Thud came up with the original idea of exciting a very small piece of fissile material.
Professor Coyote insisted that it be done with a very long but thin rod shape with a very high voltage produced by a miniaturized Marx generator while being placed in a tungsten carbide reaction chamber acting as a neutron reflector and tamper.
This produces a Low Energy Nuclear Reaction that could be focused in one direction.This can also be called a very small or portable directed energy weapon.

The two renowned particle physicists with many years of experience designing particle based weapons commonly known as Directed Energy Weapons for SANDIA and LooneyToon Cartoons realized that if they used the Townsend Electron Avalanche process to excite a low level neutron chain reaction in a fissile material, they could make a “Ray gun” or phaser; also known as a Dr. Judy Wood’s Directed Energy Weapon.

This would not only exterminate their arch enemies Bugs Bunny and the Road Runner but it would also cook their dinner at the same time. Yum just ad some MSG and “Lunch”.

After all if Dr. Ponds, Fleishmann and Jones (yes, the “truther”) could make Cold Fusion work then why not? It seemed to work for them, so they claimed.

If Dr. Jones could make Muons pop out of thin air without proof of their existence then they too could make Neutrons pop out of a Ray Gun powered only by the Eveready Bunny.
But then something very strange happened while on the way to the atom smasher. Wile E. Coyote’s trusted lab assistant E.Thud dropped one of there super high powered Neodymium magnets used in there particle accelerator and broke it.

They didn’t have any more money to get one in time off of EBAY. Without two matched magnets to use in their particle accelerator their Neutron bombardment experiments would be no good. Despite this setback, they decided to go ahead with there scientific research into Very Low Energy Neutron Deflection. What they discover was worthy of a Nobel Prize in Physics.

But unfortunately for them they don’t give out Nobel Prizes in physics to Cartoon characters even if they are renowned particle physicists that worked for Loony Tune Movies. Their discovery was simply astonishing.

They discovered that when they fired a low speed neutron beam at a very high intensity magnetic mono pole piece, that the Neutrons deflected away from the magnetic mono-pole no matter what polarity. They were dumbfounded, how could all of the physics books have got it so wrong?

Could it be that the Neutron was actually Diamagnetic and not Neutral. (Editor’s note:  Our cartoon characters just eliminated that nasty Newtonian force once known as “gravity,” that and a few other basic laws of physics that now seem to have been more “suggestions” or hypotheses backed by flawed math and falsified experimental data)

Meaning that the structure of the atom was improperly being described as being held together by the mysterious strong and weak nuclear forces, or was it just simply equal amounts of magnetic attraction and repulsion of the orbiting electrons that held the nucleus of the atom together?

When the mutual attraction of the Proton is in balance with the mutual repulsion of the Neutron their forces cancel being held together only by the magnetic field lines of the orbiting electrons.
If their discovery that the Neutron is dimagnetic and the Proton is paramagnetic then a simple Townsend Electron Discharge could blow apart an unstable fissile atom and trigger a low level nuclear reaction and that gravity is simple magnetic buoyancy. (Editor’s note:  Yes, we just invented the weightless tennis shoe among other things)
So there is no such thing as the weak force, the strong force or gravity to deal with. Every thing boils down to just simple magnetism? No Einstein needed here. (Editor’s note:  Oh, unified field theory solved and nobody told)
Wow this meant that their Ray Gun would actually work. All they needed was the fissile material to make it happen.
But when they tried to buy some Plutonium on EBAY they got busted by Homeland Security, saving Bugs Bunny and the Road Runner from evil terrorists threatening to blow up the world.

(Thank goodness for that and for all the wasted human resources and effort, leading to so much money, all unnecessary in a world where gravity and with it, unlimited free energy were suppressed on behalf of “national security.” …We weren’t here, we didn’t write this, someone else did. “We know nothing.”)