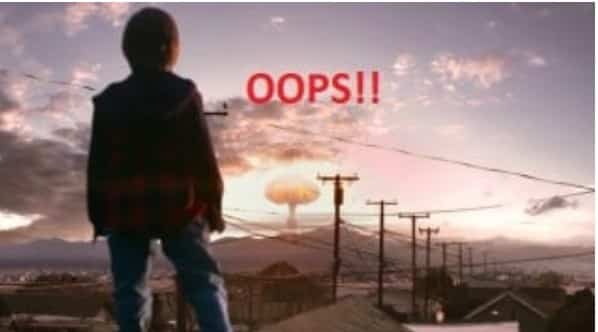 Below are responses to questions and statements made in a roundtable.  These are in answer to a US Navy nuclear weapons officer’s comments and questions.  Answers are provided by a VT team member.

This will be a fairly unique document in that it can give the public a first look ever at real issues involving nuclear weapons, America’s nuclear arsenal and how even our own military is lied to and purposefully misinformed on technical issues tied to the nuclear weapons they themselves handle every day.

We at VT are, not only the last “real” intelligence professionals around, Bush 43 saw to that, we also have the only people who know how to repair and maintain nuclear weapons.  We aren’t kidding.  As nothing can be written down, our current nuclear arsenal is maintained and overseen by people who are simply unqualified.  We are all at risk because of this.  For those of you who understand how important what we are doing is and how this may well prevent us from blowing ourselves up, add what you can in the comment section.
If we are all going to die someday at the hands of state sponsored false flag nuclear terrorism like the incident that nearly took out the London Olympics, we might as well know more about these things.
—
The U.S. is a collapsing empire that’s financially broke, maybe all PANTEX does now is polish the fu$king things with Armor All and that’s about all they can afford to do. (((This is the 24 dollar question.)))

Any stories that bolster the concept of U.S. or ISRAELI NUCLEAR SUPERIORITY however don’t pass any smell test.  Something is very wrong with those. ((Correct))))

The issue we are getting is that since Rocky Flats went down, we aren’t producing enough pits to match the breakdown of plutonium. (((Correct)))

Between you me and the fencepost, the 12 month rotation interval for nuclear weapons must be tied to a master refurbishment and fleet restocking plan that was put in place because of necessity not because they arbitrarily liked to expose the weapons in open air loading areas like Seal Beach, CA. and Indian Point in Washington State, to possible terror attack during the on-load and offload episodes. ((Correct)))

YES!!! That is the key Issue. Old Pits go bad. Otherwise why would you write off a Pit that just cost you over 5 million dollars each to make after only 35 years of service. Especially if it is supposed to be good as gold for over 100 years.

So why would you scrap 3000 plus old pits that cost over 5 million dollars each if they are good for 100’s of years. It would be much cheaper and easier to just get out the Armor-All and just shine them back up put in new parts and reset the odometer back to zero. Now Jay Leno has a brand new 57 Chevy to play with. Get the point.

The NSSA and the DOE outright tell you in their public information that the old pits are recycled into 84% pure MOX fuel. They even tell you how they do it. You can’t grind up a 97% pure PU-239 pits and mix that stuff with PU from another source. The fission rates are too far apart for the combined fuel to be stable enough to be used in a Mox fuel reactor.
It will literally move around in the fuel rod just like in a lava lamp and at some point BANG. This is what happened at Dimona and in Japan. They all were using very unstable surplus weapons grade PU-239 in there reactors as mox fuel in order to increase new PU-239 production. This is what fast breeder reactors are for. Making new weapons grade PU-239 fuel very fast.

The same scenario applies to PU production. If it is good as Gold for over 100 years then why not recycle the PU metal. That is because it deteriorates with age. The only question is how fast does it go bad and if it does not go bad then why are we retiring them after 35 years and scrapping them. Is the demand for Mox fuel that great? Why?

If PANTEX refurbishment production has halted, this means the entire U.S. nuclear arsenal will be utterly non-viable if NEW PRODUCTION is not taking place anywhere, and Duff may in fact be correct about that.(((YES)))

(((if maintained with NEW ELECTRONICS REGULARLY RETROFITTED INTO THE WEAPON at nominal intervals not to exceed 5 years or so in time for the aforementioned reasons due to gamma ray degradation of the arming,  triggering and timing circuits.))) (YES)

(((Note the PU-239 is mixed with up to 5 % Gallium. Gallium deteriorates very rapidly under neutron and Gamma ray radiation. “This is a very big weapons engineering secret.” Look it up. Just ask any nuclear physicist about Gallium irradiation problems in Nukes.)))
MOX fuel increases the overall operational output power of a reactor in thermal energy, while radically decreasing the safety margins of operating plants with this fuel. (((YES))) Japan and Dimona as examples….

If there is a shortage of warheads, the only logical reason is that the warheads are being reprocessed into nuclear fuel for reactors. ((( Why would you scrap a working Pit if it didn’t have a problem. They cost lots of money to make)))

In any case, nuclear weapons go to PANTEX or had been going to PANTEX in Amarillo Texas for decades, for refurbishment to keep them viable and reliable as the circuitry does deteriorate over time due to gamma radiation exposure changing the semiconductor substrate’s conduction characteristics significantly beyond 12 months exposure in the warhead itself. (YES) (((Semiconductors are made of silicone and Gallium. Gallium is added to the Pit.)))

If PANTEX refurbishment production has halted, this means the entire U.S. nuclear arsenal will be utterly non-viable if NEW PRODUCTION is not taking place anywhere, and Duff may in fact be correct about that. (YES)

But properly maintained nuclear warheads in human life spans, have nearly indefinite life ((((NO NO NO )))

If maintained with NEW ELECTRONICS REGULARLY RETROFITTED INTO THE WEAPON at nominal intervals not to exceed 5 years or so in time for the aforementioned reasons due to gamma ray degradation of the arming,  triggering and timing circuits. ((Correct)))
The 5 year life time is correct only for the electronics. He is not discussing the Explosives or the Boost gas problems or the corrosion problems or the plastic materials problems or the Helium gas build up problems or the PU-24/241 problems etc. He only talks about the electronic problems. This is why vacuum tubes are still used in nukes they don’t go bad due to radiation like transistors and computer chips do. But the high voltage charging capacitors in the firing circuits and the coax cables do go bad.

Electrolytic failure in the charging capacitors is a major concern. They will test OK but when put under actual firing load they explode. Old ones will actually begin to leak or bulge first. The electrolytic also dries out very rapidly. The replacement capacitors are not even made in the USA anymore they are imported from “ASIA” IE Japan Korea and China. Only the Krytrons are still made in the US.

The High Explosives are also very sensitive to neutron radiation. It dries them out very rapidly. Hydrates in the HE love to absorb neutrons this makes them very unstable after time. You and I both know how dangerous old ordnance is to handle. How many safety classes and lectures did we all have to take on that one alone.

The moral of the story is if it ain’t broke then why are you trying to fix it. If the PU does not “stink”  or go bad then why are we scraping it only after 35 years. Why not just recycle the old PU into a new pit so we can save a lot of money and time. Why can’t you just melt it down and make a new pit from the old pit. We still have the molds that the original pit was made from or do we?????????

Thanks G. You need to start a VT Chat room on the subject. It might just bring in a lot of new info that has previously been kept quiet…..

PS. please tell everybody to drop all of the negative connotations about other people. It is very un professional to act that way and it only distracts from the real issues. That is, how well is our nuclear defense system holding up and do we need to do something about it before it is too late. Are we being over run by a 5th column within our own government or are they just misguided Tree Huggers… IE…. “Hippies in power”………