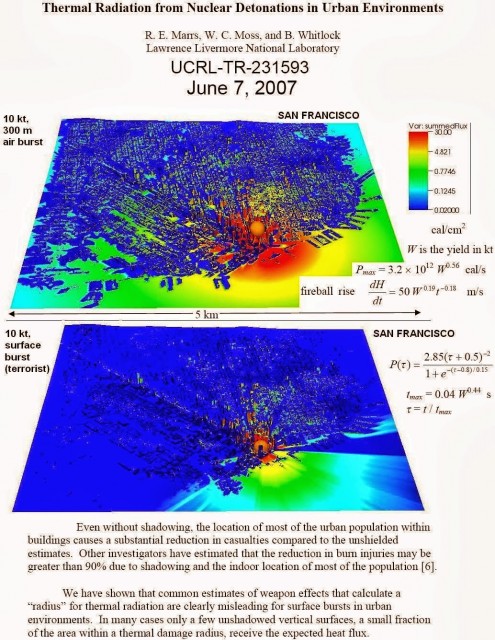 INTRODUCTION
Veterans Today is putting “out there” enough “non damaging” nuclear weapons facts to undo the obfuscation that allows nuclear terrorism to be covered up by a complicit press.
We are putting an end to this.  Our confirmations of nuclear weapon use at Gound Zero at the World Trade Center are now covered by endless documents.  We are somewhat fearful of putting things in print that contain formulas that could lead to nuclear proliferation.
We now know that at least two or more of the major explosions at the WTC on 9/11 were nuclear events reported as neutron bombs by an official and never declassified report written for the Department of Energy and Vice President Dick Cheney by teams from Sandia Labs and put into limited circulation to American political leaders in 2003, years before the totally false 9/11 investigation was undertaken, provable as a criminal coverup.
We have solid confirmations of both use of nuclear weapons in state sponsored false flag terrorism, US and “other” military operations and of a real threat of the use of nuclear weapons.  We have both full and partial confirmations of nuclear weapons in the hands of right wing groups being recovered in both the US and United Kingdom.  We have confirmations of the sale of “scrapped” nuclear weapons taken out of service by NATO and returned to the US.
We can confirm not only Israel’s nuclear weapons program but will now systematically dismember their lies about it.  “Welcome to that world.”  If you don’t like what we put out, be thankful for the things we keep back.
Those who leak information aren’t always aware of the difference between “need to know” and becoming part of the problem.  We at VT can get anything, at least now we can.  No one talks to the corporate media and everyone wants to talk while they believe there may be a chance to save something of the world.  I wouldn’t have what I have if people weren’t desperate.
Here we go, roughly translated using my “restaurant French.”
1. The original French design for Dimona was for an 18 Mega Watt low pressure water cooled open top thermal plutonium production reactor with 144 fuel rods. Later increased to 24 MW thermal in the final design. It was originally built with a triple redundant cooling system (3 each, separate electrically powered cooling systems in parallel) Each cooling system was rated at 25 MW thermal for a total emergency cooling capacity of 75 MW thermal. All cooling circuits are externally electrically powered due to the low pressure high volume cooling design. With both an oil fired steam power plant and a diesel powered power plant for back up emergency electrical power. The steam plant also provides all military base electrical power plus extra steam for uranium and plutonium fuel processing. Each fuel rod is rated at 175 KW thermal. With heavy water added for fast breeder operation this was dangerously pushed up to 500KW per fuel rod for a total production rate of 75 MW thermal.
2. A 75 mega watt thermal plant only produces about 25 MW of electrical power. They are only about 30% efficient max. The ratio is 3 to 1.
3. If you run the reactor in fast breeder mode with heavy water, criticality issues become a serious problem. If you do not have excess cooling ability to handle an overload condition or if a circuit fails you can not cool down the reactor fast enough and a steam explosion caused by a flash over event will occur. This is what happened at Dimona during an on line refiling cycle. (This is called fuel rod hot swamping.) The rods half to continuously be moved while under going radiation in order to even out the neutron flux density in the core preventing hot spots from building up. This guarantees that all rods are radiated at the same level in order to maximize plutonium production.
4. Due to advanced neutron absorption in the reactor containment / pressure vessel, accelerated vessel wall corrosion and faulty welds (not 100% weld) in the fuel rod support structures. (They used copper clad welding rods instead of stainless steel welding rods.) The reactor failed some time after 1988.
This was due to it being run at to high of a power level for too long. The containment / pressure vessel was never designed to be ran at this power level for long periods of time. They pushed the envelop and lost.
5. The containment / pressure vessel failure was a combination of the steel casing becoming to brittle from excess neutron radiation at the 75 MW power level, forming micro cracks in the containment vessel side walls. Advanced corrosion of the containment vessels surface walls and the internal fuel rod support structure welds failing to due heavy neutron bombardment of the copper in the welds. The Russians lost a few subs because of fault welding causing cooling failures in there reactors too.
6.Basically the welds that attached the fuel rod support racks to the side of the pressure vessel failed during a fuel rod removal procedure.
At that power level a flash over event occurred causing a major steam explosion seriously damaging the reactors containment /pressure vessel, support structure and cooling system. The explosion was so sever that it cracked the concrete outer containment dome.
7. The reactor was off line from about 1990 up to at least 1994 according to my data. The Israelis required extensive French assistance in cleaning up the mess. All of the highly radioactive wast was eventually dumped in Mauritian because it was deemed to dangerous to dispose of in Israel. It was so badly damaged that the French recommended that they just fill it full of cement and weld the door shut………
8. This is an excerpt from the French DGSE report on the Dimona steam explosion to the DOE, circa 1994. Note it is Still Classified.(I will redact “actionable material” voluntarily, editor)

CLEARANCE LEVEL “Q” AND ABOVE/EYES ONLY

This describes the system installed in all Westinghouse PWRs. Other
reactor brands use similar systems. Note that these capsules are
located next to the core where they receive significantly more irradiation
than the reactor pot. It is from these very specimens that it was
extrapolated that neutron embrittlement MIGHT be a problem toward the
design life of the pot. Several steps have been taken to mitigate the
problem. But first a little review of what the problem really is.
Steel exhibits a property called the Nil Ductility Transition (NDI). Below
the transition temperature, steel loses its ductility and becomes brittle.
The temperature varies with allow but is usually fairly low, below
the freezing point of water. Long term neutron irradiation causes
crystal lattice defects in the steel which raises the NDT temperature.
The concern is that if the NDT temperature rises above that of cooling
water, in the event of an accident, cold cooling water could shock
the reactor while it was below NDT and thus cause it to fracture.
Under no scenario of irradiation is the NDT predicted rise above
approximately ambient temperature.

Several simple steps have been taken to address the problem. Because
the rise in NDT is directly related to the total integrated fast neutron
flux dose, the first simple step was reduce the enrichment of the fuel
in peripheral fuel channels. This reduces the generation of fast
neutrons AND provides shielding from fast neutrons in the interior
of the core. Next, for reactors whose capsules show the possibility
of problems, they have been derated, typically to 95% full power.
Again this markedly reduces the fast flux impinging on the pot.
Lastly and most expensively, the sources of emergency cooling water
now have heaters installed so that the cooling water is hotter than
any possible NDT temperature.

The other important fact is that neutron embrittlement is completely
reversed by annealing. The high temperature allows displaced
atoms in the crystal lattice to snap back into place. If embrittlement
becomes a problem, the reactor can be annealed in place. The process
will involve adapting the same equipment used to anneal the reactor
after fabrication to a radiation environment. Not particularly
pleasant for the workers but certainly doable. Massive literature
on the subject is available. Reports of work at the FFTF on the
subject are of great interest. Much work has been done on neutron
embrittlement in relation to hot fusion research because most of the
energy from a hot fusion reaction is postulated to come from fast
neutrons that will heavily irradiate the reactor components.
Bonus section:

A Primer on the Detection of Nuclear and Radiological Weapons