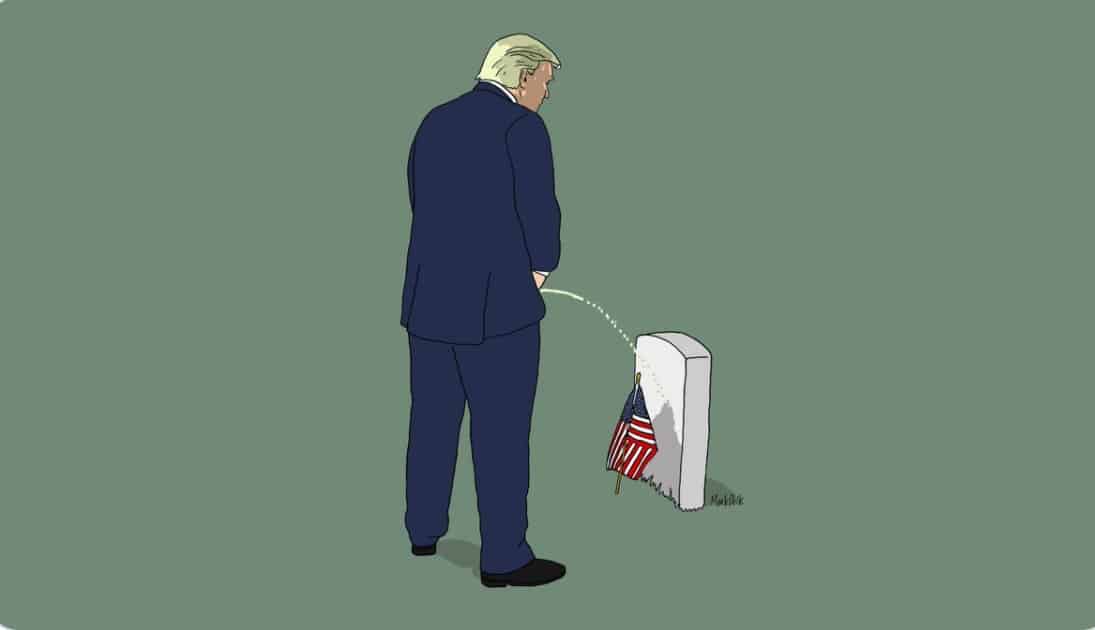 On President Trump’s denial of reporting by the Atlantic that he called Americans who died in war “losers” and “suckers,” retired Gen. Barry McCaffrey says, “It’s very plausible to me. It’s exactly what he said.”

VT: For some, it is taking down the banner and replacing it with a smaller sign, further from the road; for others, no change to Biden, the Trump sign just hits the trash. Will votes change or has the insult against American military and veterans that overtly backing Trump announces found some still capable of shame?

This is who Trump is: someone who calls America's veterans and fallen service members "losers" and "suckers" then vehemently denies he ever said it.

So, who do you believe? Trump? Or the Atlantic, Associated Press, Washington Post, New York Times, Fox News and CNN? pic.twitter.com/ZmWTi9npCe

VT isn’t late into recognizing Trump as someone who despises American veterans. Lots of Washington politicians are chickenhawk-draftdodgers; the GOP is filled with them, the likes of Rush Limbaugh with a pimple on his ass or Trump’s imaginary ‘bone spur.

He doesn’t just dishonor those who served, or those who died or were wounded. He dishonors those currently serving every single day, who are now ordered to burn wheat fields to starve Syrian children.

💥Wanted to keep disabled veterans out of parades

“The allegations were first reported in The Atlantic. A senior Defense Department official with firsthand knowledge of events and a senior U.S. Marine Corps officer who was told about Trump’s comments confirmed some of the remarks to The Associated Press, including the 2018 cemetery comments. Photographs of Belleau Wood USMC Cemetery by Gordon and Carol Duff (taken in the rain – Gordon Duff who served with the 5th Marines wears a French Fourragère in honor of Belleau Wood on his uniform…it it still fits)

The defense officials said Trump made the comments as he begged off visiting the cemetery outside Paris during a meeting following his presidential daily briefing on the morning of Nov. 10, 2018.

Staffers from the National Security Council and the Secret Service told Trump that rainy weather made helicopter travel to the cemetery risky, but they could drive there. Trump responded by saying he didn’t want to visit the cemetery because it was “filled with losers,” the official said, speaking on condition of anonymity because the official was not authorized to discuss it publicly.

The White House blamed the canceled visit on poor weather at the time.

In another conversation on the trip, The Atlantic said, Trump referred to the 1,800 Marines who died in the World War I battle of Belleau Wood as “suckers” for getting killed.”

On President Trump’s denial of reporting by the Atlantic that he called Americans who died in war "losers" and "suckers," retired Gen. Barry McCaffrey says, “It’s very plausible to me. It’s exactly what he said.” https://t.co/HDMXTFGAyD

I noticed all of my conservative and military friends who support Trump have gone dark today. I wonder if calling the men who died in service to our nation losers and suckers opened their eyes. Perhaps, but likely not. How long before we return to everything being Obama's fault?

I am old enough to recall that he marketed Trump University to veterans and survivors, hoping to scoop up their military education benefits.

Yup: Trump scammed veterans, widows and orphans. After all, they're suckers who deserve to lose their money! https://t.co/roszJZevMe

A new report details multiple instances of 45 making disparaging remarks about members of the U.S. military who have been captured or killed, including the American war dead at the Aisne-Marne American Cemetery in France as “losers” and “suckers.” https://t.co/AcfOfvf7Ky

She circled back with one source today, who firmly said “this was not a one-off.” Her source says Trump repeatedly called John McCain and veterans “suckers.” pic.twitter.com/aPXSHKSeCR

Votes changed?  We don’t think so.

Multiple Trump administration officials have now confirmed that he repeatedly disparaged veterans and fallen service members, calling them “losers” and “suckers.” Any military personnel or veterans who still support Trump should hold their head in shame.

The AP's investigative reporter James LaPorta, a former Marine, has confirmed with his military sources Jeffrey Goldberg's utterly shocking story in The Atlantic today and has posted his own piece:https://t.co/13Chb1Sra5

It's not a coincidence that Trump ordered closure of 'Stars and Stripes', the military's independent newspaper, a day after it was revealed he called fallen American soldiers, "Losers" and "Suckers". Trump is trying to manipulate the military vote.

Trump called our military dead "losers" & "suckers" & didn't want wounded vets in his military parade because "nobody wants to see that." He doesn't give a fuck that 186,000 Americans have died of Covid-19. He's a psychopath & the world's luckiest serial killer. #VOTEBIDENHARRIS

The real "suckers" and "losers" are the boot-lickers that defend the disgustin' human bein' occupyin' the Peoples' House.https://t.co/vpnb8Nc47i

Everyone in America needs to hear this retired major general's reaction to Trump calling our military "suckers" and "losers". https://t.co/K2yzdmXSKm

John Kelly appears to be in a unique position to confirm whether President Trump called U.S service members who died in combat “losers” and “suckers.”#TraitorTrumphttps://t.co/tnPlkKnwv0