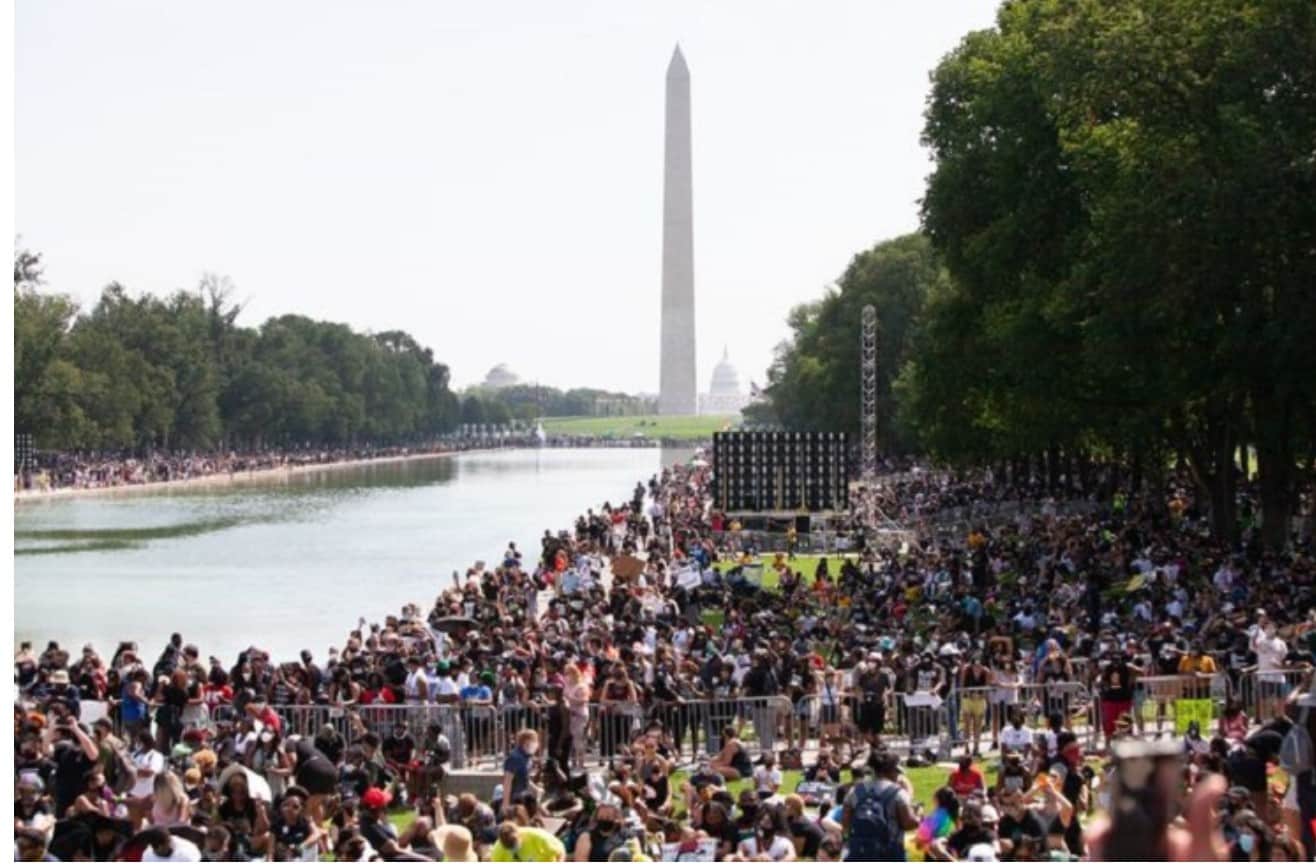 by Deena Stryker and New Eastern Outlook, of the Russian Academy of Science

Fifty-seven years after Martin Luther King’s “I have a Dream” speech, thousands of black Americans turned out on the same Washington Mall to reaffirm that ‘Black Lives Matter’ on Saturday, August 29th, setting off speculation that the country may be descending into a kind of civil war.

Black American history began with the importation of slaves from Africa by the first white settlers more than four hundred years ago. Yet neither the nineteenth century civil war that killed more Americans than all of the country’s foreign wars, nor the legislative measures taken since it ended to ‘guarantee’ black Americans ‘equal treatment under the law’, have sufficed: With 15% of the total US population, Blacks continue to live in conditions that in fact maintain the suspicion and abuse that culminates in unjustified police killings.

At the same time however, community colleges as well as a growing number of prestigious institutions seeking to burnish their ‘progressive’ credentials, have enabled black Americans to gain the intellectual tools with which to challenge white intellectuals. Nowhere is this seen more dramatically than in the growing number of black journalists on newspapers, progressive magazines, and major television networks, both as anchors and guest commentators.

As I write this, two young black women who report together on the sports world demonstrate a larger remit, pointing out that when a white policeman shoots seven bullets into the back of an unarmed black man while clutching his shirt with his other hand, it is out of fear. Subliminally, that same fear explains why in the face of growing injustice, intellectuals’ respect for the Black Lives Matter movement is dropping.

Meanwhile, athletes are moving in the opposite direction. In 2016, star white football player Colin Kaepernick began kneeling to protest racial injustice as the national anthem was played before games. With ‘taking a knee’ going viral, the football bosses fired Kaepernick, ultimately realizing that they could not do without this valuable player.

And when the assassination by police of George Floyd was followed by that of Michael Black, on the off chance that he might have been carrying a knife (one was safely stored under his car floor), teams across the country issued a statement that they would no longer allow their bodies to be used as entertainment while black murders continued.

This demonstration of political maturity by ‘jocks’ (men valued only for their ability in sports) forced the press to highlight the stark differences in the way police arrest black and white ‘offenders’. When a seventeen-year old took it upon himself to ‘assist’ the forces of law and order in the city where Black was shot, killing two protesters in broad daylight, it showed him being politely ‘taken into custody’ and offered food and water by police.

The contrast set off the race war that Trump had been promising were he to lose the up-coming election. Relayed by a media always eager for a juicy story, the President’s derogatory references to black people, referred to as ‘dog whistles’ are bearing fruit.

Donald Trump’s main motivation for seeking the presidency having been to get four years of uninterrupted limelight, however his white supremacist backers hired him to transform a flawed democracy into a race-based dictatorship. His history of run-of-the-mill racism, such as conniving to keep Black tenants out of his rental properties, suggested that he would be a willing accomplice.

And while public attention was directed toward accusations of Russian election intervention in his favor, Trump was campaigning to Make America White Again, benefitting from police traditions that hark back to the days when they were tracking down runaway slaves.

But the story doesn’t stop there. While the ‘race war’ occupies the headlines, New York’s Attorney Generals are preparing indictments that could land Donald Trump in jail for the rest of his life once he is no longer protected by his office. To prevent that from happening, he tried to render the post office incapable of counting the mail-in ballots that many voters would prefer to Covid-spreading voting facilities. When that failed, he unleashed a race war, banking on human avoidance of change during a crisis.

Should the election nonetheless go badly for him, in the interval between the November election and the January swearing in of President Biden, Trump will enlist ‘his’ Attorney General, Bill Barr, and the Republican leader of the Senate, Mitch McConnell, in efforts to somehow put his white collar crimes out of reach.

Should that attempt fail, Americans can only hope that he absconds to a friendly country, such as Turkey, rather than encouraging all-out civil war from behind the scenes.

The county has entered a perilous moment, that has nothing to do with foreign threats to its democracy.

Deena Stryker is a US-born international expert, author and journalist that lived in Eastern and Western Europe and has been writing about the big picture for 50 years. Over the years she penned a number of books, including Russia’s Americans. Her essays can also be found at Otherjones. Especially for the online magazine “New Eastern Outlook