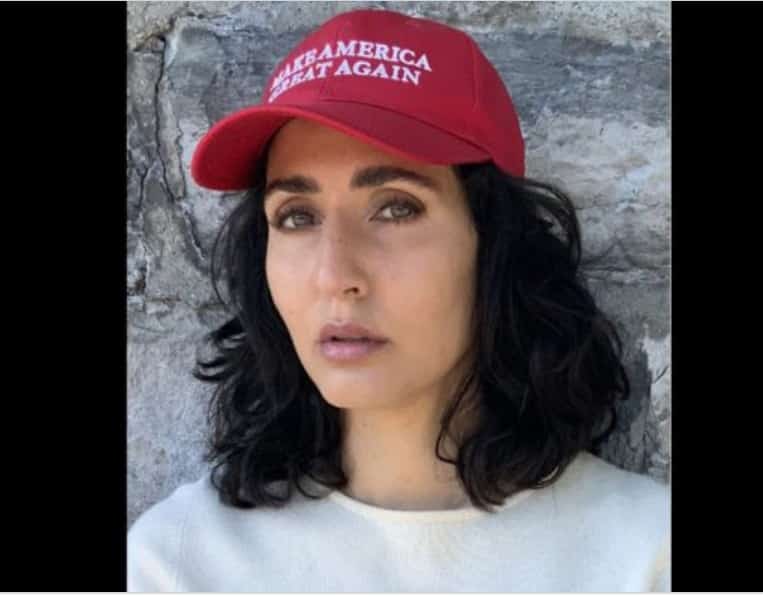 VT: Some say Noor is trying to complete the destruction of America, some say she is a Qanon ‘Super Genius’ Like Trump…

Noor’s family, rather than being terrorists, are Saudi billionaires that build royal palaces and enjoy every privilege, including financial ties to the Trump family.

“ISIS proliferated under the Obama/Biden administration, leading to them coming to Europe. Trump has shown he protects America and us by extension from foreign threats by obliterating terrorists at the root and before they get a chance to strike,” she told the conservative news outlet.

“I have been a supporter of President Trump since he announced he was running in the early days in 2015. I have watched from afar and I admire this man’s resolve,” she said. “He must be reelected … It’s vital for the future of not only America, but western civilization as a whole.”

“You look at all the terrorist attacks that have happened in Europe over the past 19 years. They have completely shaken us to the core … [extremist ideology] has completely infiltrated our society,” Noor bin Ladin added.

Although ostensibly fighting a war on terror for the last couple of decades, the American deep state and political establishment have clandestinely nurtured Islamic jihadists and used them as proxies in myriad conflict zones of the Middle East to achieve “strategic objectives.”

If we take a cursory look at the history of the recent US administrations, the Carter and Reagan administrations trained and armed Afghan Mujahideen against the former Soviet Union during the Cold War in the late 1970s and 80s, those same “freedom fighters” later mutated into al-Qaeda and Taliban; the Clinton administration used Islamic jihadists to break up former Yugoslavia in the 1990s; the Bush administration invaded Iraq in 2003 that gave birth to al-Qaeda in Iraq; and, as Noor bin Ladin perceptively noted, the Obama administration initiated a proxy war in Syria to safeguard Israel’s regional security, consequently giving birth to the Islamic State. Only the Trump administration has taken an unequivocal stand against terrorism and has never collaborated with any extremist militant group throughout its four-year tenure.

Regarding the Western powers’ modus operandi of waging proxy wars in the Middle East, since the times of the Soviet-Afghan jihad during the eighties, it has been the fail-safe game plan of master strategists at NATO to raise money [2] from the oil-rich emirates of Saudi Arabia, Qatar, UAE and Kuwait; then buy billions of dollars’ worth of weapons from the arms markets [3] in the Eastern Europe; and then provide those weapons and guerilla warfare training to the disaffected population of the victim country by using the intelligence agencies of the latter’s regional adversaries. Whether it’s Afghanistan, Chechnya, former Yugoslavia, Libya or Syria, the same playbook was executed to the letter.

Raising funds for proxy wars from the oil-rich Gulf Arab States allows the Western executives the freedom to evade congressional scrutiny; the benefit of buying weapons from unregulated arms markets of the Eastern Europe is that such weapons cannot be traced back to the Western capitals; and using jihadist proxies to achieve strategic objectives has the advantage of taking the plea of “plausible deniability” if the strategy backfires, which it often does. Remember that al-Qaeda and Taliban were the by-products of the Soviet-Afghan jihad, and the Islamic State and its global network of terrorists were the blowback of the proxy war in Syria.

Here, let me try to dispel a myth peddled by the corporate media and foreign policy think tanks that the Islamic State originated from al-Qaeda in Iraq. Many biased political commentators of the mainstream media deliberately try to muddle the reality in order to link the emergence of the Islamic State to the ill-conceived invasion of Iraq in 2003 by the Republican Bush administration.

Their motive behind this chicanery is to absolve the Obama administration’s policy of nurturing the Syrian opposition against the government of Bashar al-Assad since the beginning of Syria’s proxy war until June 2014, when the Islamic State overran Mosul in Iraq and the Obama administration made a volte-face on its previous “regime change” policy of providing indiscriminate support to Syrian militants and declared a war against a faction of Syrian rebel groups, the Islamic State.

Mainstream media’s duplicitous spin-doctors misleadingly try to find the roots of the Islamic State in al-Qaeda in Iraq; however, the insurgency in Iraq died down after the Bush administration’s “Iraq Surge” of 2007. Al-Qaeda in Iraq became an impotent organization after the death of Abu Musab al Zarqawi in June 2006 and the subsequent surge of troops in Iraq. The re-eruption of insurgency in Iraq was the spillover effect of nurturing militants in Syria, when the Islamic State overran Fallujah and parts of Ramadi in January 2014 and subsequently reached the zenith of its power by capturing Mosul in June 2014.

The borders between Syria and Iraq are highly porous and it’s impossible to contain the flow of militants and arms between the two countries. The Obama administration’s policy of providing money, weapons and training to Syrian militants in training camps located at the border regions of Turkey and Jordan bordering Syria was bound to backfire sooner or later.

Notwithstanding, over the decades, it has been a convenient stratagem of the Western powers with two-party political systems, particularly the US, to evade responsibility for the death and destruction brought upon the hapless Middle Eastern countries by their predecessors by playing the “good cop, bad cop” routine.

For instance, during the Soviet-Afghan jihad of the 1980s, the Carter and Reagan administrations nurtured the Afghan jihadists against the Soviet-backed government in Kabul with the help of Pakistan’s intelligence agencies. The Afghan jihad created a flood of millions of refugees who sought refuge in the border regions of Pakistan and Iran.

The Reagan administration’s policy of providing training and arms to the Afghan militants had the unintended consequences of spawning al-Qaeda and Taliban and it also destabilized the Af-Pak region, which is still in the midst of lawlessness, perpetual anarchy and an unrelenting Taliban insurgency more than four decades after the proxy war was fought in Afghanistan.

After the signing of the Geneva Accords in 1988, however, and the subsequent change of guard in Washington, the Clinton administration dissociated itself from the ill-fated Reagan administration’s policy of nurturing Afghan militants with the help of Gulf’s petro-dollars and Pakistan’s intelligence agencies and laid the blame squarely on minor regional players.

Similarly, during the Libyan so-called “humanitarian intervention” in 2011, the Obama administration provided money and arms to myriads of tribal militias and Islamic jihadists to topple the Arab-nationalist Gaddafi regime. But after the policy backfired and pushed Libya into lawlessness, anarchy and civil war, the mainstream media pointed the finger at Egypt, UAE and Russia for backing the renegade general, Khalifa Haftar, in eastern Libya, even though he had lived for more than two decades [4] in the US right next to the CIA’s headquarter in Langley, Virginia.

The definition of the term “terrorism” has been deliberately left ambiguous by the Western powers to use it as a catch-all pretext to justify their interventionist policy in the energy-rich Islamic countries. Depending on context, “terrorism” can mean two markedly distinct phenomena: religious extremism or militancy.

If terrorism is understood as religious extremism, then that is a cultural mindset and one cannot possibly hope to transform cultures through the means of war and military interventions; if anything, war will further radicalize the society.

However, by terrorism, if the Western powers mean militancy, then tamping down on militancy and violence through the agency of war does makes sense because a policy of disarmament and de-weaponization can be subsequently pursued in the liberated territories.

In the contemporary politics, I take the view, on empirical grounds, that all kinds of violence is essentially wrong; because the end goals for which such violence is often employed are seldom right and elusive at best. Although democracy and liberal ideals are cherished goals but such goals can only be accomplished through peaceful means; expecting from armed and violent militants to bring about democratic reform is incredibly naïve and preposterous.

The Western mainstream media and its neoliberal constituents, however, take a different view. According to them, there are two distinct kinds of violence: justifiable and unjustifiable. When a militant resorts to violence for the secular and nationalist goals, such as “bringing democracy” to Libya and Syria, the misinformed neoliberals enthusiastically exhort such form of violence.

However, if such militants later turn out to be Islamic jihadists, like the Misrata militia and Ansar al-Sharia in Libya, or the Islamic State, al-Nusra Front, Jaysh al-Islam and Ahrar al-Sham in Syria, the credulous neoliberals, who were misguided by the mainstream narrative, promptly make a volte-face and label the erstwhile “freedom fighters” and “moderate rebels” as “terrorists.”

[1] Osama bin Laden’s niece says only Trump can prevent another 9/11: