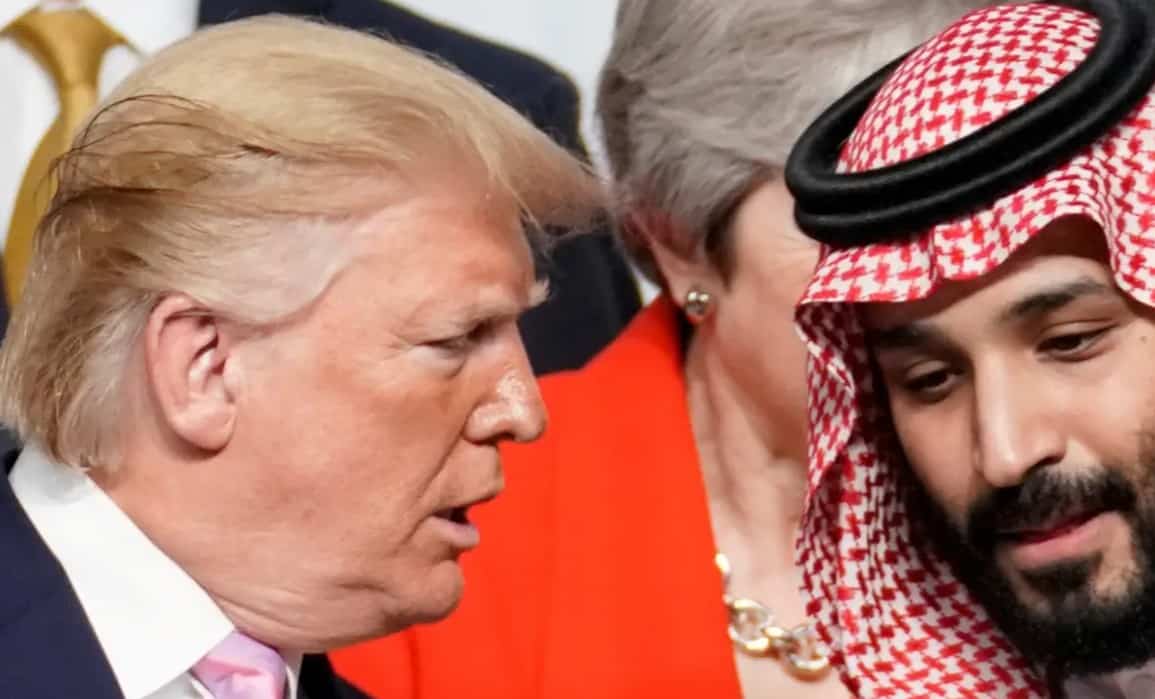 Besides the admission that Trump knew coronavirus was deadly yet he deliberately downplayed the outbreak, Bob Woodward has made several other startling revelations [1] in his book “Rage” set to be released on September 15.

President Donald Trump boasted that he protected Saudi Arabia’s Crown Prince Mohammed bin Salman from congressional scrutiny after the brutal assassination of Saudi dissident and Washington Post journalist Jamal Khashoggi, who was brutally murdered at the Saudi consulate in Istanbul in October 2018.

When Woodward pressed Trump if he believed the Saudi crown prince ordered the assassination himself, Trump responded:

“He says very strongly that he didn’t do it. Bob, they spent $400 billion over a fairly short period of time,” the president said. “And you know, they’re in the Middle East. You know, they’re big. Because of their religious monuments, you know, they have the real power. They have the oil, but they also have the great monuments for religion. You know that, right? For that religion.” “They wouldn’t last a week if we’re not there, and they know it,” he added.

One apparent reason the mainstream media took morbid interest in the gory details of the grisly assassination of Jamal Khashoggi in October 2018 could be that Khashoggi was a columnist for The Washington Post, which is owned by Jeff Bezos, the world’s richest man with $200 billion net worth and the owner of Amazon.

Bezos had a score to settle [2] with Saudi Crown Prince Mohammad bin Salman. Mohammad bin Salman hacked Bezos’ phone in May 2018 and sent the details of Bezos’ extramarital affair to the National Enquirer in January 2019, leading to Bezos’ wife MacKenzie Scott divorcing him and taking a significant portion, $35.6 billion, of Bezos’ obscene wealth as alimony.

Nevertheless, the Washington Post has a history of working in close collaboration with the CIA, as Bezos won a $600 million contract [3] in 2013 to host the CIA’s database on the Amazon’s web-hosting service. It bears mentioning that despite Saudi Crown Prince Mohammad bin Salman being primarily responsible for the war in Yemen that has claimed over hundred thousand lives and created a famine in the impoverished country, the mainstream media hailed him as a “moderate reformer” who brought radical reforms to the conservative Saudi society by permitting women to drive and allowing cinemas to screen Hollywood movies.

So what prompted the sudden change of heart in the mainstream media that the purported “moderate reformer” was all of a sudden reviled as a brutal murderer? More than anything, it was the timing of the assassination and the political mileage that could be obtained from the Khashoggi murder in the domestic politics of the United States that prompted the mainstream media to take advantage of the opportunity and mount a smear campaign against the Trump administration by publicizing the assassination.

Jamal Khashoggi was murdered on October 2, 2018, when the US midterm elections slated for November were only a few weeks away. Donald Trump and his son-in-law Jared Kushner in particular are known to have forged close business relations with the Saudi royal family. It doesn’t come as a surprise that Donald Trump chose Saudi Arabia and Israel for his maiden overseas visit in May 2017.

Thus, the corporate media’s campaign to seek justice for the murder of Jamal Khashoggi in October 2018 was actually a smear campaign against Donald Trump and his conservative political base, which became obvious after the US midterm election results were tallied.

Clearly, two factors were responsible for the surprising defeat of the Republicans in the US midterm elections. Firstly, the Khashoggi murder and the smear campaign unleashed against the Trump administration by the neoliberal media, which Donald Trump often pejoratively derides as “Fake News” on social media.

Secondly, and more importantly, the parcel bombs sent to the residences of George Soros, Hillary Clinton, Barack Obama, Joe Biden, Kamala Harris, several other Democratic Congressmen and The New York Times New York office by Cesar Sayoc in October, 2018, in the run-up to the midterm elections in November.

Although the suspect turned out to be a mentally ill Trump supporter, he was likely instigated by shady hands in the American deep state, which is wary of the anti-establishment rhetoric and non-interventionist tendencies of the so-called “alt-right” administration.

That the accused had a history of mental illness [4], childhood sexual abuse, substance abuse, including anabolic steroids, cognitive difficulties, including dyslexia, and was apprehended by police several times for grand theft auto and shoplifting doesn’t come as a surprise because it’s always easy to manipulate and trap such gullible patsies into perpetrating heinous crimes.

In fact, the case of Cesar Sayoc can be compared to another iconic “patsy” in the American political history, Lee Harvey Oswald, the alleged assassin of John F. Kennedy, who was picked up as a scapegoat because he had visited Russia and Cuba before the hit-job in order to put the blame for the high-profile political assassination on the communists.

Not surprisingly, he was silenced by Jack Ruby before he could open his mouth and prove innocence in the courts of law. The cold-blooded murder of the only non-interventionist president in American history was obviously perpetrated by a professional sniper on the payroll of the American deep state.

It was not a coincidence that Kennedy was killed in November 1963, and months later, the Gulf of Tonkin resolution authorized Lyndon B. Johnson to directly engage in the Vietnam conflict in August 1964 on the basis of a false flag naval engagement.

It’s obvious that the American deep state, comprising the State and Defense department bureaucracies, the Democratic and Republican Party establishments and the mainstream media, was responsible for the assassination of Kennedy.

Most likely, the deep state turned against Kennedy after the October 1962 Cuban missile crisis and Kennedy’s pacifist rhetoric and conciliatory approach toward Washington’s arch-rival, the former Soviet Union, in the backdrop of the Cold War.

[2] The Saudi heir and the alleged plot to undermine Jeff Bezos:

[3] Jeff Bezos Is Doing Huge Business with the CIA, While Keeping His Washington Post Readers in the Dark:

[4] The curious case of Cesar Sayoc: