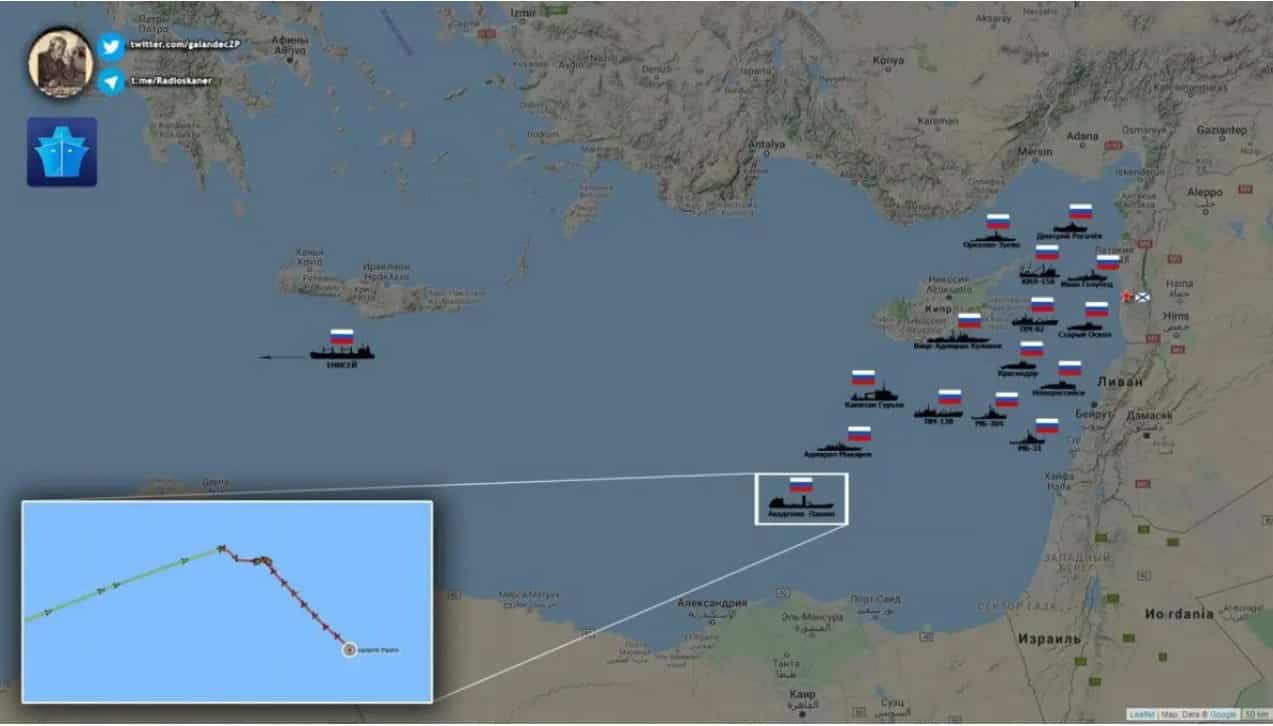 A large number of Russian warships were recently tracked off the coasts of Syria and Cyprus in the eastern Mediterranean region, the Russian publication Avia.Pro reported.

According to the online publication, “experts are seriously concerned about the presence of at least 15 Russian warships and submarines off the coast of Syria. This is the first time such a large military formation has been seen here, which raises suspicions about whether Russia plans to engage in a military special operation against jihadists using the navy.

In a photo shared on their site, the 15 Russian warships and submarines can be seen positioned between the island nation of Cyprus and nearby Syria, along with some ships north of Egypt and another near the central part of the Mediterranean.

According to the Telegram channel, Hunter Notes, “one of the last to appear off the coast of Syria was the tanker of the Northern Fleet of the Russian Navy ‘Akademik Pashin’; boats, and, obviously, this is far from the final number of ships of the Russian Navy located in the eastern part of the Mediterranean Sea.”

This Russian naval buildup also comes at a time of increased tension between Turkey, Cyprus and Greece in the eastern Mediterranean, as the latter two countries have accused Ankara of encroaching on their territorial waters.

Russia strengthens military base near US troops in northeast Syria: photo

The Russian military has reportedly strengthened its presence at the Al-Qamishli Airbase in northeastern Syria, a new report said this week.

According to Avia.Pro, the Russian Air Force moved a number of helicopters and a cargo plane to the Al-Qamishli Airbase recently, which comes only two weeks after a traffic incident with the U.S. military.

“The Russian military is actively using the capabilities of its second airbase in Syria. So, according to satellite images, at the moment, on the territory of the military airfield in the city of Qamishli, there are at least four combat helicopters and one Il-76 military transport aircraft,” the Russian publication said.

“According to some information, which could not be confirmed without satellite imagery, there are actually at least 6 rotorcraft at the Qamishli airbase, which are used to patrol the northern, northeastern and central parts of Syria, although earlier rotary-winged vehicles were seen only at the Khmeimim airbase,” they added.

The Russian military has been using the Al-Qamishli Airbase since 2019, when an agreement was reached with the Syrian Democratic Forces (SDF) inside the Al-Raqqa and Al-Hasakah governorates.

It should be noted that the U.S. military also has a large presence in the Al-Hasakah Governorate, which makes the recent buildup by the Russian Armed Forces rather interesting at this juncture of the conflict.