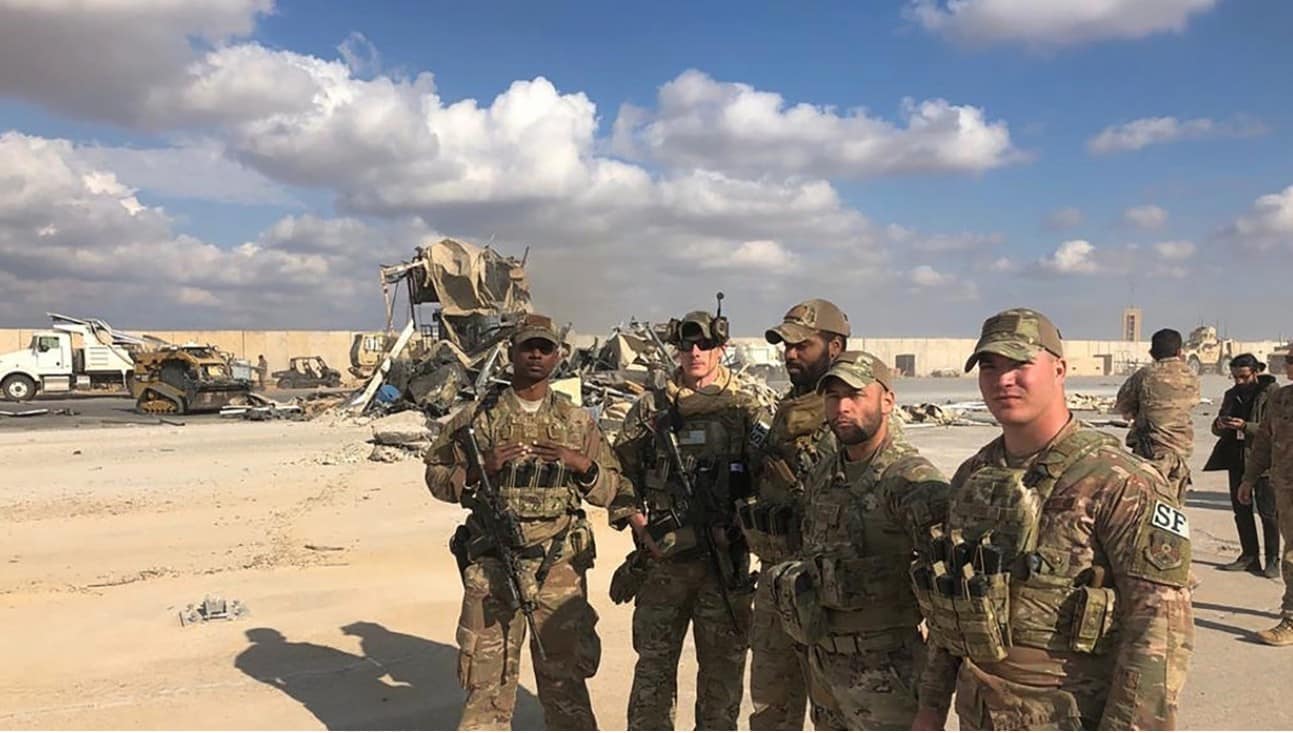 U.S. Soldiers stand at a site of Iranian bombing at Ain al-Asad air base in Anbar, Iraq, Monday, Jan. 13, 2020 © AP Photo/Qassim Abdul-Zahra
–
…by Rachel Marsden, columnist, political strategist and host of an independently produced French-language program that airs on Sputnik France. Her website can be found at rachelmarsden.com
–
RT: If Trump’s words about his dislike for war and US troops fighting ‘forever wars’ matched his actions, there would be no American soldiers in the Middle East and Afghanistan. Nor would he still be selling weapons to the region.
–
Nearly two years ago, I asked Russian President Vladimir Putin at his annual press conference whether he thought that American troops would really withdraw from the Middle East – a promise on which Donald Trump had campaigned, winning the support of those of us non-neoconservatives who are against pointless war. (Ed: a moronic statement)
–
At the time, Trump had spoken of withdrawing troops from Syria. “The United States have been present in, say, Afghanistan, for how long? Seventeen years, and every year they talk about withdrawing the troops. But they are still there,” replied Putin.

One might say that the Russian president was onto something.

And nearly two years later, as Trump faces reelection and a need to show that he has fulfilled a key promise from his last campaign, here we go again with yet another troop withdrawal announcement – this time, from Iraq and Afghanistan.

US Central Command’s General Frank McKenzie announced this week that American troop presence in Iraq will drop from 5,200 to 3,000 by the end of this month, and will decrease from 8,600 to 4,500 in Afghanistan by the end of October.

Trump talks so much of his dislike for war and for leaving troops overseas to fight dumb forever wars that if his actions actually matched his words, there wouldn’t be any American soldiers left in the Middle East at this point. That’s far from being the case.

By the time Trump took office, there were reportedly about 8,400 US troops in Afghanistan, but Trump subsequently ramped up that figure by at least another 3,000. But that doesn’t tell the whole story. Far from it.

What often goes unnoticed is that Trump has been outsourcing America’s wars to private contractors working for the Pentagon at levels higher or at least equal to their drawdown during the previous administration of President Barack Obama.

Today, there are 25,650 total Pentagon contractors in Afghanistan and 6,551 in Syria and Iraq, according to the latest report published by US Central Command (USCENTCOM) in July 2020. And while they’re not necessarily over there fighting – although who’s to say that at least some of them can’t go kinetic – they’re at the very least occupying these countries while performing work related to logistics/maintenance, base support, and armed security.

In any case, they’re an active foreign presence in the conflict zones, and direct representatives of the United States Defense Department. If Trump is serious about getting the US military out of foreign countries, then these contractors have to go, too.

And the war machine is more than just about soldiers. It also includes the weapons, to which Trump alluded when he dropped an inconvenient truth about the American military-industrial complex while attempting to explain why Pentagon brass isn’t “in love” with him (as he believes the rank-and-file soldiers are).

“The top people in the Pentagon probably aren’t because they want to do nothing but fight wars so that all of those wonderful companies that make the bombs and make the planes and make everything else stay happy,” Trump said.

Based on that statement, you’d think that Trump, the US Commander in Chief, was against the principle of wars for profit. Except that the profit part of war is what Trump himself has sought to preserve at all cost.

His recent “peace deal” to normalize relations between Israel and the United Arab Emirates – two countries that have long cooperated on matters of national security – is really just a convenient pretext to sell more American made weapons to the anti-Iranian Middle Eastern axis. In the fine print of the deal itself is the sale of F-35 fighter jets to the UAE. Why would Trump sell them weapons if he was trying to reduce the possibility of war?

And in the wake of the murder and dismemberment of Washington Post columnist, Jamal Khashoggi, inside the consulate of Saudi Arabia in Istanbul, Trump explained why the act shouldn’t impede arms sales to Saudi Arabia.

“After my heavily negotiated trip to Saudi Arabia last year, the Kingdom agreed to spend and invest $450 billion in the United States. This is a record amount of money,” Trump said in a statement that he titled ‘America First!’. “Of the $450 billion, $110 billion will be spent on the purchase of military equipment from Boeing, Lockheed Martin, Raytheon and many other great US defense contractors. If we foolishly cancel these contracts, Russia and China would be the enormous beneficiaries – and very happy to acquire all of this newfound business.”

That doesn’t sound like a martyr willing to sacrifice the military-industrial complex at the altar of peace. Trump’s administration even went so far as to use an emergency declaration involving a threat from the Iranian bogeyman to override a congressional ban on selling weapons to the Saudis. The State Department watchdog, Inspector General Steve Linick, was even reportedly fired for looking into the deal and Trump’s override of congress.

Trump may portray himself as anti-war – and, to be fair, he’s the first president since Jimmy Carter to not start a new war during his term – but still, he has a long way to go before his actions match his rhetoric.