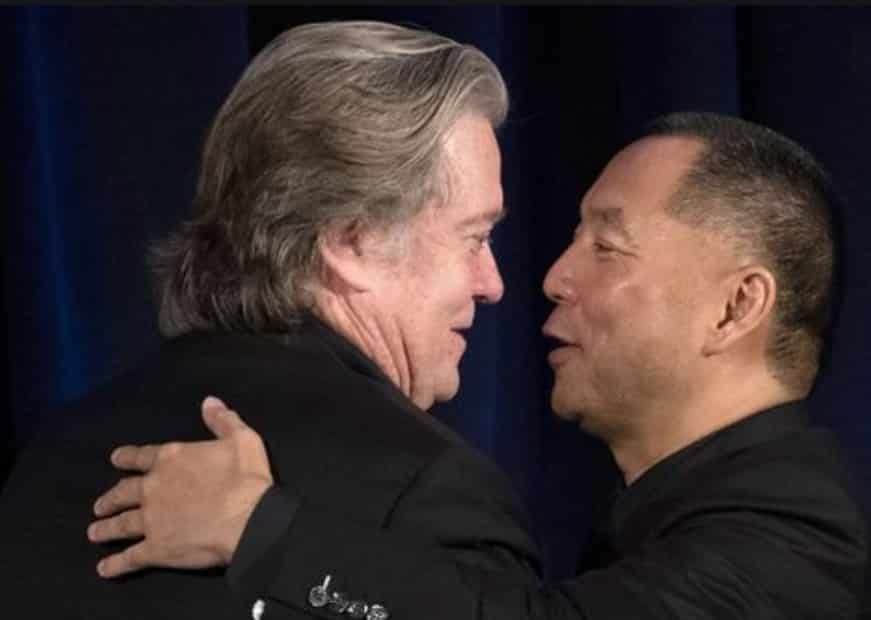 By Andre Vltchek for VT

In some very rare cases, it is better to read British conservative, right-wing press, like The Economist or the Telegraph, instead of the mainstream liberal sheets like The Independent or The Guardian. That is if one wants to come somehow closer to the truth.

The Economist is extremely biased; it is pre-historically conservative, anti-Russian, anti-Chinese, and laughably cold-war-style – anti-Communist. But it has some breaks and limits, which the liberal mainstream media already lost many years ago. And it does not forgive what it considers ‘bad manners’ and ‘bad taste.’

Recently, an on-going saga which involves a notorious right-wing ‘couple’ – Guo Wengui and Steve Bannon – received unusually harsh but frank analyses from The Economist, while all big British liberal newspapers have been busy trashing, fanatically, everything Chinese and Russian.

“From his 152-foot yacht and his $67.5m penthouse overlooking Central Park, he spins tales of Chinese elite corruption and purges, styling himself a “CCP terminator.” (Mr. Bannon is given the same nickname). On June 4, Messrs. Guo and Bannon announced, aboard the yacht in New York harbor, the founding of “The New Federal State of China,” meant to supplant the People’s Republic.”

Needless to say, no one in the PRC seemed to be impressed or inspired, especially considering the fact that Mr. Guo is wanted in China on various unsavory charges, ranging from sexual assault to bribery. China is doing extremely well, economically, socially, and even environmentally, and the majority of its people are content with the political system. But “The New Federal State of China” catchphrase is not for the Chinese citizens to admire; it is for the Western consumption, and especially for the Guo’s fundraising campaigns in the U.S. and Europe.

Before escaping from China, Mr. Guo rode high, many say, using corruption and extortion to amass his billion-plus dollars fortune. But ‘good times’ ended when President Xi came to power and began cracking on corruption. Mr. Guo escaped, shut the door behind him, and cursed CCP for spoiling his dark machinations. Since then, he has been involved in each and every attempt to attack and discredit Beijing and Chinese leadership.

For a long time, U.S. intelligence and diplomatic community had a great kick out of Mr. Guo and of his friend Mr. Ma Jian, who some time ago got also hit by a determined anti-corruption campaign in the PRC. But Guo and Ma were never fully trusted even in the West, when both of them used to live in China, or, especially, after Mr. Guo’s escape to the United States, where he asked for political asylum. Many have thought that Guo went grotesquely hyperbolic, in order to please his masters in Washington and secure favors.

On August 26, 2020, Foreign Policy warned against Mr. Guo and people of his type:

“Western policymakers should be wary of figures like Guo. Take Ahmed Chalabi, the Baghdad multimillionaire who fled Iraq after becoming wrapped up in a Jordanian financial scandal. Chalabi played a malignant role in the U.S. drive to the Iraq War, making a series of exaggerated claims that were taken seriously by political and military leaders. As U.S. relations degenerate with China, the space for those like Guo to operate will grow.”

Mr. Guo teamed up with Steve Bannon. Soon after, these two right-wing extremists unleashed the most aggressive and ridiculous anti-Beijing and anti-CCP campaigns in modern history. They began dropping names to openly insult the most populous nation on earth, twisting history, and smear what even the deeply anti-Chinese Trump administration wouldn’t dare to touch. The problem for them was that they became too extreme even for some “respectful” right-wing politicians and the mass media outlets. In brief: they began behaving like two adolescent fools and in the most embarrassing manner.

Despite all that, the couple has not been without influence on the U.S. administration; it has been extremely active in Washington’s power annals. But those whom it has been persuading have been chiefly the individuals who already reached the point of no return, who would not stop at anything. They simply wanted a war, a military conflict with China. Full stop.

Others are reluctant to take renegade billionaire seriously. Guo’s style, or more precisely his lack of style, is not only embarrassing, but it is also extremely dangerous. China may be a patient nation, but now it is also indignant when facing insults from one of its citizens who should most likely be in jail for serious crimes, but who is instead sheltered by the United States system.

The Economist concluded, in its article about Mr. Guo:

“…American intelligence is said to listen to his insights – but also to keep him at arm’s length… That may be wise. The day before Mr. Bannon’s arrest the ‘Journal’ had reported that a company he and Mr. Guo are involved in, GTV Media Group, was the subject of a federal investigation into its fundraising. Mr. Guo called the report a fabrication, part of the CCP’s plot to take Mr. Bannon down. But his antics have worn thin on his hosts. “There would be a lot of groans when his name came up,” says a former Trump administration official. In both Beijing and Washington, it seems.”

For some time, it was taught that the anti-Chinese hysteria was supposed to help Mr. Trump to get reelected. That is when Messrs. Guo and Bannon were used. This cynical strategy failed to deliver results. Most American voters are scared. They are losing jobs, and many are now losing roofs over their heads. They know almost nothing about China, and they have very little time for learning.

President Trump is a pragmatic, and some would say, brutal businessman. He may now have very little use for Mr. Guo and Mr. Bannon. They may soon, literally, end up on the street. That would be good for both China and the world.

The luxury yacht of Mr. Guo, on which Steve Bannon was recently arrested, is already for sale. And so is the Manhattan apartment.