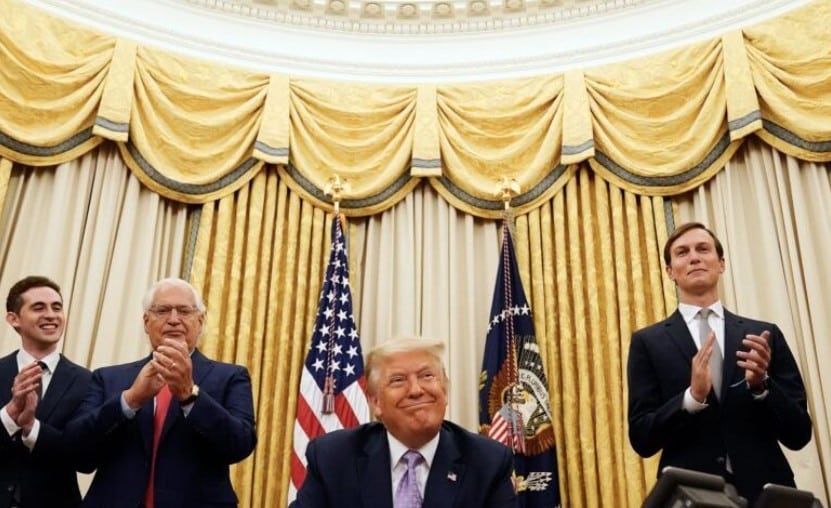 In a solemn ceremony at the White House today, President Trump hosted Israeli Prime Minister Benjamin Netanyahu and the foreign ministers of UAE and Bahrain for the signing of the accord establishing formal diplomatic relations between the three countries.

Oman could be next in line as its late Sultan Qaboos had already hosted Israeli prime minister once before, though Saudi Arabia, Kuwait and Qatar are unlikely to establish diplomatic ties with Israel in the near term, because being conservative monarchies, they are more receptive to mainstream Arab sentiment firmly against Israel for violating the rights of the Palestinians.

Existence of informal ties between the Gulf States and Israel is no secret. They’ve been fighting wars together in regional conflicts against Iran and allied forces, notably in Syria, for almost a decade.

But it must’ve taken some persuasive skills by the Trump administration to convince Abu Dhabi’s Crown Prince Mohammad bin Zayed and Bahrain’s King Hamad bin al-Khalifa to formally recognize Israel in the run-up the US presidential elections slated for November 3.

Regarding the reciprocal relationship between Washington and the Gulf’s autocrats, it bears mentioning that in April 2016, the Saudi foreign minister threatened [1] that the Saudi kingdom would sell up to $750 billion in treasury securities and other assets if the US Congress passed a bill that would allow Americans to sue the Saudi government in the United States courts for its role in the September 11, 2001 terror attack – though the bill was eventually passed, Saudi authorities have not been held accountable; even though 15 out of 19 9/11 hijackers were Saudi nationals.

Additionally, regarding the Western defense production industry’s sales of arms to the Gulf Arab States, a report [2] authored by William Hartung of the US-based Center for International Policy found that the Obama administration had offered Saudi Arabia more than $115 billion in weapons, military equipment and training during its eight-year tenure.

Similarly, the top items in Trump’s agenda for his maiden visit to Saudi Arabia in May 2017 were: first, he threw his weight behind the idea of the Saudi-led “Arab NATO” to counter Iran’s influence in the region; and second, he announced an unprecedented arms package for Saudi Arabia.

The package included between $98 billion and $128 billion in arms sales and, over a period of 10 years, total sales could reach $400 billion, as Donald Trump himself alluded to in his conversations with American journalist Bob Woodward described in the newly released book “Rage.”

Therefore, keeping the economic dependence of the Western countries on the Gulf Arab States in mind during the times of global recession when most of manufacturing has been outsourced to China, it is not surprising that when the late King Abdullah of Saudi Arabia decided to provide training and arms to the Islamic jihadists in the border regions of Turkey and Jordan against the Assad government in Syria, the Obama administration was left with no other choice but to join the US’ regional Middle Eastern allies. This was in spite of the sectarian nature of the proxy war and its attendant consequences of breeding a new generation of Islamic jihadists, who would become a long-term security risk not only to the Middle East but to the Western countries.

Similarly, when King Abdullah’s successor King Salman decided, on the whim of the Crown Prince Mohammad bin Salman, to invade Yemen in March 2015, once again the Obama administration had to yield to the dictates of Saudi Arabia and UAE by fully coordinating the Gulf-led military campaign in Yemen not only by providing intelligence, planning and logistical support but also by selling billions of dollars’ worth of arms and ammunition to the Gulf Arab States during the conflict.

In this reciprocal relationship, the US provides security to the ruling families of the Gulf Arab states by providing weapons and troops; and in return, the Gulf’s petro-sheikhs contribute substantial investments to the tune of trillions of dollars to the Western economies.

Washington’s interest in Syria’s proxy war has been mainly about conceding to security concerns of the Gulf’s autocrats and ensuring Israel’s regional security. The United States Defense Intelligence Agency’s declassified report [3] of 2012 clearly spelled out the imminent rise of a Salafist principality in northeastern Syria – in Raqqa and Deir al-Zor which were occupied by the Islamic State until October 2017 – in the event of an outbreak of a civil war in Syria.

Under pressure from the Zionist lobby in Washington, however, the former Obama administration deliberately suppressed the report and also overlooked the view in general that a proxy war in Syria would give birth to radical Islamic jihadists.

The hawks in Washington were fully aware of the consequences of their actions in Syria, but they kept pursuing the ill-fated policy of nurturing militants in the training camps located in Syria’s border regions with Turkey and Jordan in order to weaken the anti-Zionist Syrian government.

The single biggest threat to Israel’s regional security was posed by the Iranian resistance axis, which is comprised of Tehran, Damascus and their Lebanon-based surrogate, Hezbollah. During the course of 2006 Lebanon War, Hezbollah fired hundreds of rockets into northern Israel and Israel’s defense community realized for the first time the nature of threat that Hezbollah and its patrons posed to Israel’s regional security.

Those were only unguided rockets but it was a wakeup call for Israel’s military strategists that what would happen if Iran passed the guided missile technology to Hezbollah whose area of operations lies very close to the northern borders of Israel. Therefore, the Zionist lobbies in Washington literally coerced then-President Obama to coordinate a proxy war against Damascus and its Lebanon-based surrogate Hezbollah in order to dismantle the Iranian resistance axis against Israel.

Over the years, Israel has not only provided medical aid and material support to the militant groups battling Damascus – particularly to various factions of the Free Syria Army (FSA) and al-Qaeda’s Syrian affiliate al-Nusra Front in Daraa and Quneitra bordering the Israel-occupied Golan Heights – but Israel’s air force has virtually played the role of the air force of Syrian militants and conducted hundreds of airstrikes in Syria during the eight-year conflict.

In an interview to New York Times [4] in January last year, Israel’s outgoing Chief of Staff Lt. General Gadi Eisenkot confessed that the Netanyahu government approved his shift in strategy in January 2017 to step up airstrikes in Syria. Consequently, more than 200 Israeli airstrikes were launched against the Syrian targets in 2017 and 2018, as revealed [5] by the Israeli Intelligence Minister Israel Katz in September 2018.

In 2018 alone, Israel’s air force dropped 2,000 bombs in Syria. The purpose of Israeli airstrikes in Syria has been to degrade Iran’s guided missile technology provided to Damascus and its Lebanon-based proxy, Hezbollah, which poses an existential threat to Israel’s regional security.

Though after Russia provided S-300 missile system to the Syrian military after a Russian surveillance aircraft was shot down by Syrian air defenses during an Israeli incursion into the Syrian airspace, on September 2018, killing 15 Russians onboard, the Israeli airstrikes in Syria have been significantly scaled down.

Following the incident, though Israel has conducted occasional airstrikes in Daraa and Quneitra in southern Syria and Deir al-Zor in eastern Syria, Israeli airstrikes in northwest Syria, which is within the range of missile defense systems deployed at Hmeimim Air Base near coastal Latakia, have almost entirely ceased.

Taking cover of the Israeli airstrikes, Washington has conducted several airstrikes of its own on targets in Syria and Iraq and blamed them on Israel, which frequently mounts air and missile strikes against Iranian operatives and Hezbollah militia in Syria and Lebanon.

Besides the airstrikes on the missile storage facilities of Iran-backed militias in Iraq, it is suspected that the US air force was also behind an airstrike last year at the newly built Imam Ali military base in eastern Syria at al-Bukamal-Qaim border crossing alleged to be hosting the Iranian Quds Force operatives.