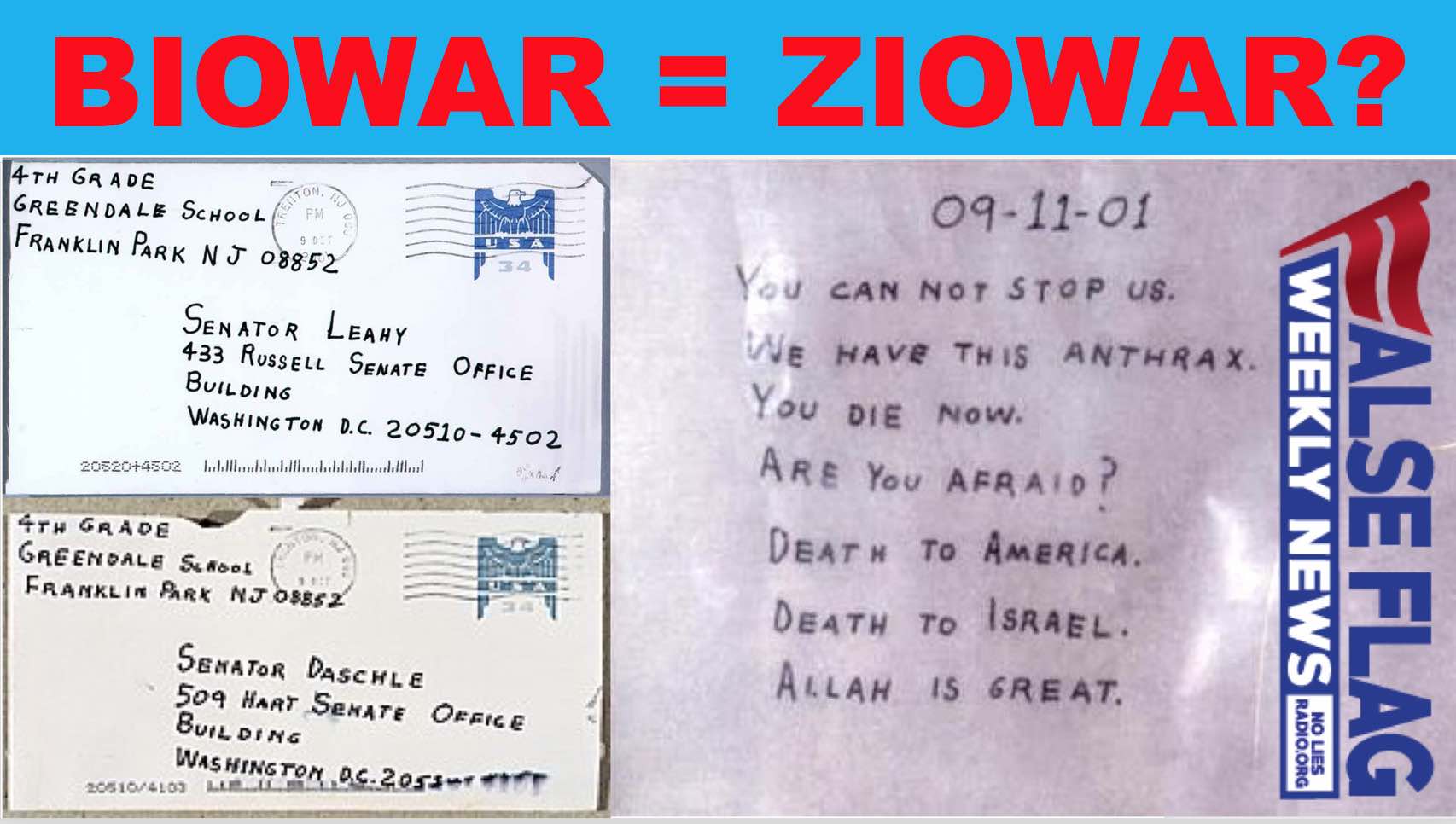 Here, in honor of the 19th anniversary of The 2001 Anthrax Deception, is the latest False Flag Weekly News (check out links to the stories we covered) and a flashback to my pre-COVID article on US biowar.  -Kevin Barrett, VT Editor

A toxic cocktail of germ warfare and big lies

by Kevin Barrett, for Crescent International

Ten years ago I interviewed Lyme disease researcher and filmmaker Timothy Grey on my radio show. Grey’s film Under the Eight-Ball recounts his harrowing experience watching his younger sister die of Lyme disease… and then learning that the American Establishment — including academia, big pharma, big media, the military, and the medical profession — are covering up the true nature, origin, scope, and threat of Lyme and related tick-borne diseases.

When I interviewed Timothy Grey in 2009 I had just been diagnosed with Lyme disease… 12 years late. I contacted Lyme in 1997, immediately developing most of the classic symptoms — including a grapefruit-size swollen ball on my knee, a grinding headache that rose and fell in intensity but never went away, chronic fatigue, occasional facial tics, insomnia, and joint damage that necessitated hip replacements while I was still in my mid-fifties.

But the doctors refused to test for Lyme. They said the tests were unreliable and it was too expensive; and besides, I hadn’t noticed any red bullseye rash when the symptoms first appeared in 1997.

So I wasn’t diagnosed until the Summer of 2009, when I spent 45 days with a fever above 100 degrees that finally peaked at 105 — at which point my whole body suddenly broke out with dozens of bright red bullseye rashes. The emergency room physicians in Richland, Wisconsin, who are intimately familiar with Lyme symptoms, immediately diagnosed and treated me with three weeks of oral antibiotics.

The symptoms receded. They disappeared entirely three years later, after I underwent a massive course of antibiotics (six weeks I.V., six months oral) for a staph infection contracted during hip replacement surgery (I am eternally grateful to Allah (swt) for sending me that life-threatening staph infection, which turned out to be a proverbial blessing in disguise).

During our 2009 interview, Timothy Grey told me that Lyme disease had been created in a lab by US government germ warfare scientists. He had even obtained a filmed confession from one of the scientists, Willy Burgdorfer, for whom the Lyme spirochete is named.

I believed Timothy Grey. But the mainstream authorities didn’t. The New York Times called Under the Eight-Ball “an anti-establishment tirade” “propelled by rage” in which “it’s impossible to know where verifiable science leaves off, and conspiracy theory begins.” Neither the Times nor any other mainstream journalistic outlet covered Willy Burgdorfer’s teary confession, captured on video by Timothy Grey, that he, Burgdorfer, had manufactured Lyme disease for a US germ warfare program, then spent the rest of his career lying about it.

Fortunately, award-winning Stanford University science writer Kris (Kim) Newby, a Lyme sufferer herself, understood the significance of Burgdorfer’s confession — and had the courage to launch her own investigation, despite insider warnings that “this is the kind of stuff people get killed over.”

The result is Bitten: The Secret History of Lyme Disease and Biological Weapons, which establishes, with full mainstream credibility, that Timothy Grey was right all along. Though many details will remain murky until more whistleblowers step forward, it is now undeniable that Lyme disease is a US government engineered bioweapon, not a naturally-occurring pathogen.

Many people find it hard to believe that the US military would run its germ warfare programs so recklessly that a monstrous scourge like Lyme disease could emerge from one of General Frankenstein’s labs at Fort Detrick, Maryland, or Dugway Proving Ground in Utah, or the Plum Island Animal Disease Center just a few miles from Lyme, Connecticut, where the disease first appeared.

Surely the United States of America, a liberal democracy with a relatively free media, would carry out only minimal germ warfare research, for purely defensive purposes, only when urgently necessary, under the most stringent safeguards.

And surely it would never actually use such a weapon in anger. And if anything like this had ever happened, our free and independent media would quickly expose it. Right?

Those who still think the American Establishment is benevolent should consult Newby’s Bitten, then read two more books that provide essential historical context on the Pentagon’s shameful history of biological warfare: Dave Chaddock’s This Must Be the Place, which chronicles the US military’s massive use of bioweapons during its genocidal Korean war; and Graeme MacQueen’s The 2001 Anthrax Deception, which demonstrates that the same domestic coup-plotters who orchestrated the 9/11 false-flag event were also responsible for mailing US-military-weaponized anthrax to media outlets and members of Congress, in order to terrorize Congress into passing the USA PATRIOT Act and acquiescing to 9/11.

Taken together, the two books demonstrate that those in charge of US biowar programs are not just wildly reckless and grossly unethical, but downright psychopathic. These revelations, and others like them, show that the US, far from being a liberal democracy with a free and critical media, is an oligarchical war criminal dictatorship with a controlled propaganda apparatus.

Chaddock’s book turns the received narrative of North Korean and Chinese “brainwashing” American prisoners-of-war on its head. As Chaddock shows, the numerous detailed confessions by American servicemen who admitted to dropping bioweapons on Korea are entirely credible and supported by extensive corroborating evidence, including military documents.

The confessions, far from being elicited under duress, were the product of China’s (and to a lesser extent North Korea’s) shockingly humane, even friendly treatment of American prisoners. The Chinese had learned during their revolution that if you treat war prisoners well, and spread the news, enemy soldiers get the message and surrender much more readily than they otherwise would. Chaddock cites abundant documentation that captured Americans were typically greeted with hugs, a cigarette, good food, decent quarters, good medical treatment, and other amenities.

Only escapees and extremely uncooperative prisoners received harsher treatment. Prisoners and their captors discussed politics and international affairs over meals and cigarettes, and developed friendly relationships.

The result was that about 80% of US prisoners came over to their Communist captors’ point of view, agreeing that the US war on Korea was criminal or misguided. Only about one in five prisoners continued to view their captors as “the enemy.”

It is easy to see how, in such an atmosphere, American prisoners would confess their war crimes. And they did. When they returned home, they were browbeaten by military superiors and forced to lie.

To cover up its massive use of cholera and plague-bearing fleas during the war, the American high command invented the term “brainwashing” and insisted that somehow the Communists had figured out how to make American servicemen say terrible things about their country. Today, thanks to Dave Chaddock and other researchers, we know that those terrible things, and much more, were true.

Though the US blithely murdered more than three million civilians in Korea, bombing every city, town, and village to rubble, while dropping 400,000 germ bombs on Ponyang alone according to Korean historians, and then lied about these and other matters in perpetuity, surely it wouldn’t ever use bioweapons against its own people. Would it? While I assume (or at least hope) the release of US military engineered Lyme disease was an accident, the same cannot be said of the 2001 false-flag anthrax attacks analyzed in Graeme MacQueen’s The 2001 Anthrax Deception.

Unlike 9/11, the follow-up anthrax attacks are officially deemed, by the US government itself, to have been false flags from within the US bioweapons complex designed to whip up hatred of Muslims.

The American government admits it wasn’t Muslims who mailed US government anthrax to Tom Daschle and Patrick Leahy, the two Senators blocking passage of the USA PATRIOT Act, in envelopes bearing the message: “Death to America. Death to Israel. Allah is great.” A number of journalists got similar envelopes. Twenty-two people, including postal workers, were sickened, and five died.

So if it wasn’t radical Muslims, then who did it? The official scapegoat is the conveniently suicided Bruce Ivins, senior biodefense researcher at the United States Army Medical Research Institute of Infectious Diseases (USAMRIID), Fort Detrick, Maryland. But Graeme MacQueen, Founding Director of the Centre for Peace Studies at McMaster University, shows that the real perpetrators were the same insiders who orchestrated 9/11,

All evidence indicates that the master narrative of the fall [anthrax] attacks had been established prior to 9/11 — inter alia setting up Iraq through false statements about its anthrax supplies and means of delivery… (p.139).

MacQueen shows that the individuals set up to be blamed for the 9/11 “hijackings” were also set up in advance to be blamed for the anthrax attacks. When the FBI’s relatively honest preliminary investigation showed the anthrax was of American provenance, and couldn’t have come from Iraq, the 9/11-anthrax coup perpetrators were forced to change their story and suppress or downplay all of the many links they had created between the anthrax attacks and the 9/11 hijacker patsies.

The horror stories briefly summarized above show that US bioweapons programs are in the hands of madmen — and have been for almost seven decades. The damage caused by biowar programs, including the sickening and deaths of countless Koreans by plague and cholera, and the suffering, death, and partial or total disabling of millions of people afflicted with Lyme disease, is incalculable.

But all of these millions of deaths and injuries could be dwarfed by what the future will bring. Advances in biotechnology, especially genetic engineering, have vastly expanded the potential for bioweaponized malfeasance. Biological agents that kill or disable people slowly and undetectably, including race-specific bioweapons, are on the horizon.

If perpetrators are not held to account for past crimes, and if we don’t insist that international conventions banning bioweapons be strictly enforced, we will be facing an even more nightmarish future.