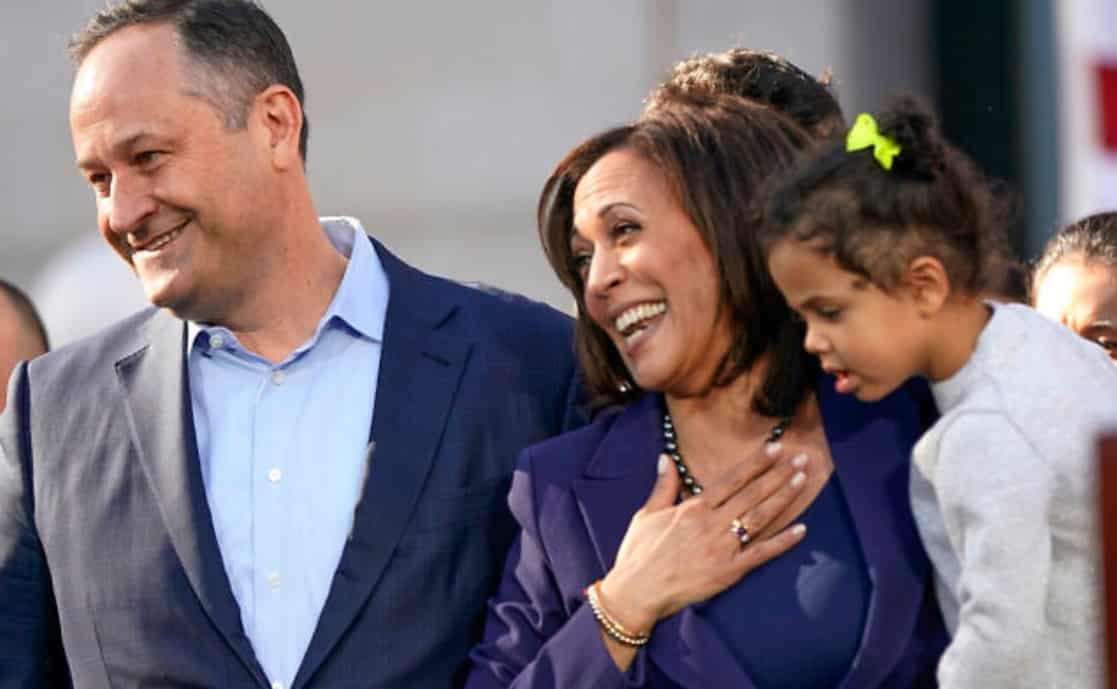 By John Haywood for VT

Had the 77-year-old Biden chosen Michigan Governor Gretchen Whitmer, White governor of a crucial swing state, his victory would be assured, a race war avoided, and the odds of a Mideast blood bath involving American soldiers and Marines greatly diminished.

But you have to hand it to Biden. His choice of Black California Senator Kamala Harris and her Jewish husband was devilishly clever. After more than a century of Gentile Zionists in the White House, the prospect of a Jewish one has moved tens of millions of dollars promised to Trump to Mr. Biden.

The upshot: The Trump campaign has had to cut way back on advertising at a time when they’re down in the polls big time. The Biden camp, naturally enough, is spending like there’s no tomorrow. Trump has talked about putting in his own money to make the difference, but he has so many lawsuits filed against him he’s spending $60m a year just to pay lawyers to defend himself.

This even after Trump has jumped through every hoop the Zionists placed before him: recognition of Jerusalem as Israel’s capital, moving the American embassy there, approving the annexation of the Golan Heights, trashing Obama’s deal with Iran and reimposing sanctions, cutting aid to the Palestinian Authority, etc.

If they asked him, he did it. And it proves beyond any shadow of a doubt that there’s no more honor among racists than among thieves.

Don’t think Zionism is racist? Consider the three tenets of Zionism set forth in The Jewish State, a pamphlet written in 1896 by its founder, Hungarian journalist Theodore Herzl:

Just as Christianity became the state religion of the Roman empire following the conversion of Emperor Constantine, so too did the Cult of Zionism become the state religion of the United States following the conversion of President Woodrow Wilson. Wilson was far and away our most racist president before Trump came along. He promised the NAACP he’d be fair and they gave him their support. Once in office, however, he segregated federal facilities and told them in a heated exchange that “segregation was good” for them. He also began the twenty-year occupation of Haiti and the seven-year occupation of Nicaragua.

And he was fiercely loyal to the Zionists and sent 55,000 American soldiers and Marines to their deaths in France that Palestine might be awarded them as a prize of war and as a payoff for bringing the United States into the war.

But I digress from Joe Biden and his new found Zionist money and what it means for American boots on the ground in the inevitable blood bath in the Mideast. IT’S INEVITABLE BECAUSE ISRAEL IS A BELEAGUERED EUROPEN COLONY COMPOSED OF SIX MILLION JEWS SURROUNDED 260 MILLION HOSTILES.

A peaceful solution can only be reached by way of a military alliance between the United States, China and Russia in which the American military role is confined (at it politically must be) to protecting its new allies from British and French interference. It will be up to the Chinese and Russian militaries to pressure Israel into surrendering its vast WMD arsenal and force a Jewish exodus from Palestine.

Folks, Zionist money comes with strings attached. It always has and it always will. A prime example appears at pages 86 to 91 of my book White Nation Going, Going, Gone in a section titled: “JFK Compromised, Elected, Hoodwinked, and Replaced.” Read it and fear for our men and women in uniform.

Other than Zionist money, Harris contributes nothing toward winning the election for Biden. Everyone knows Biden already owns the national minority vote. Does anyone seriously think California’s electoral vote is up for grabs? With or without Harris, he couldn’t lose California if he tried. Plus, it’s hard to see how his choice of a person of color helps with the whites. After all, Mr. Obama was part of the same 13% minority as Harris and he received two terms in office. Moreover, once the Whites lose their majority (the Census Bureau says it will happen in a little over two decades from now) is it realistic to believe any Caucasian man or woman will ever thereafter occupy the Oval Office?

Which brings me to my contention the Harris pick makes a race war inevitable. Everyone knows by now that Donald Trump is a terrible person. His former lawyer, former associates, even members of his family tell us so. As indicated earlier he has so many lawsuits pending against him he’s paying out $60m a year in legal fees and that may go on forever. Investigators in his home state are sniffing around his tax returns trying to find a way to catch him in a violation of the law. And he’s way down in the polls. This man is like a trapped animal, which makes him extremely dangerous.

We also know one more thing about Mr. Trump: he’s is a consummate opportunist. Joe Biden, by choosing a black woman as his running mate, has just handed him a political lifeline. And all Trump has to do to seize it is to let federal government payments to the many minority unemployed come to an end. Which is happening right now.

I just saw an interview of an unemployed black man with a family who say his only savings are equal to his September rent. Since minorities are usually last hired, first fired, I dare say there are millions more just like him.

When the money runs out, what are they to do? Do I really have to tell you? You know damn well they’re gonna hit the streets. It really could get quite ugly.

How did our race relations get so bad? Consider these words of an unknown but prophetic pundit published in1896:

Corporations have been enthroned, and an era of corruption will follow in which the Money Power will endeavor to prolong its reign by working on the prejudices of the country until wealth is aggregated in a few hands and the republic is destroyed.

In White Nation…I tell how the Money Power has historically and to this very day placed racists on the Supreme Court who “pervert the Constitution” (Lincoln’s words) just as they did before the Civil War. These perversions serve to oppress minorities by denying them their civil rights while masking the oppression and convincing the white majority that the minorities are receiving special treatment. The Court has also upheld unconstitutional statutes some of which, such as the equal employment opportunity laws, were supposedly enacted to protect the American worker from discrimination but in practice are used to pit the races and genders against each other to keep wages low.

The worst of these perversions (there are a number of them) occurred in the 2012 case of National Federation of Independent Businesses v. Sebelius in which seven justices, five Republican and two Democrats, held a perfectly constitutional mandate to the Southern and border states–that they expand Medicaid to the 28 million mostly Black and brown working poor or lose all federal Medicaid funding—unconstitutional.

Justice Ginsburg’s dissent, joined in by Justice Sotomayer, was quite strong on the law, but extremely weak on the consequences. So weak that it can only charitably be called a “looking the other way” even though looking the other way was better than this whopper President Obama told the nation:

In the three-page statement that followed there was no mention of or reference to the Congressional mandate. Five months later Mr. Obama was re-elected, but the Democratic Congress which had assiduously done its job relative to health care was not.

In the six and a three-quarter years since the mandate was to take effect (and using my estimate at page 49 of White Nation which involves 9th grade algebra), OVER FOUR MILLION have died as a result of the decision. Soon that figure will exceed the six million killed in the Holocaust.

The remedy: Congressional authorization for the appointment of sixteen additional justices to the Court who will enter an order reversing existing perversions and prevent additional ones. A proposal for such an order concludes White Nation.