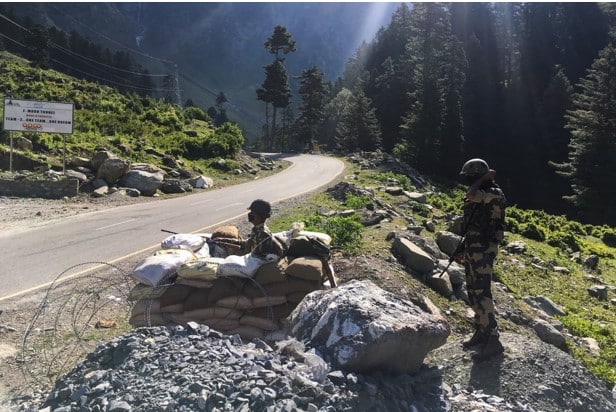 …by Zaheerul Hassan for VT

Two nuclear neighbours’ reinforced their  forces after developing tension on 3379.6224 Km (2100 Miles) long   Actual   Line of Control (ALC) where killing of 20 Indian and some Chinese soldiers took placed in June 2020. The tension multiplied further when both the countries refused to step back on their actual position.

Starting from 1962 to till 2020, four deadliest conflicts had been taken placed between China and India.   Meanwhile, American President Donald Trump contrary to the statement of his spokesman over China -Taiwan issue,  offered to mediate in reducing military tension , Trump also  offered to help  in settling down  territorial dispute between two Himalayan countries  being  faced even  before their inceptions.

Actually, Trump such offers cannot be taken as sincere and serious efforts because Washington real policy is totally different towards China than what he is portraying. It is just a Trump campaign for winning Nobel Prize as he was nominated for it.

In 1914, representatives from Britain, Republic of China and Tibet gathered in Simla and negotiated to conclude a treaty that would determine the status of Tibet and effectively settle the borders between China and British India. In this connection, 880KM (550 miles) long line was demarcated and named as McMahon Line.

President of Demarcation Committee was British Colonial Administrator Sir Henry McMahon who proposed this line between North-East of British India and Tibat in 1914. The treaty was signed by McMahon and Lonchen Satra on behalf of Tibetan Government but on the other hand the same was not accepted by China. However, India maintains that the McMahon Line, as frontier which extends through the Himalayas, is the official legal border between China and India.

India got independence in 1947 and China converted from Communist to Peoples Republic China under the leadership of Mao Zedong in 1949. Accordingly, border conflict along with other unresolved issues transferred to new rulers too. The tensions with intervals continue to escalate between two populous nuclear neighbours.

It further provoked when China sought control of critical roadways near its western frontier in Xinjiang, while India and its Western allies considered Beijing presence as part of a wider plot to export Maoist-style Communism across the region.

In 1962 already prevailing, border tension led to all-out war between India and China. In that more than 1000 Indian soldiers killed, 3000 injured and Chinese casualties were about to 800 soldiers. Chinese forces entered deep enough into disputed territory and achieved total victory in that war.

Moreover, Pakistan being one of the newly emerged regional states of Himalayas Range was also directly affected due to Indian illegal claim over Kashmir. History reveals, then Indian Prime Minister Pandat  Jawar Lal Nehro requested to then USA President John F Kennedy for convincing Pakistan to remain neutral in India – China War. He also assured that Kashmir issue would be resolved bilaterally after the war.

Thus, then Pakistani President Ayub Khan gave assurance of nonintervention   to USA President, even his  foreign minister suggested Ayub to attack India for resurgence of Occupied Kashmir. Later, as usual Indian Prime Minister after the war refused to abide by the promise made with Pakistan.

Recent clash of June 2020 over Galwan Valley ignited the issue again when Indian forces after leaving behind 20 causalities were pushed back by Chinese Forces.  In this connection, Indian government accepted in the parliament that China occupied 38000 sq km area in Eastern Sector, where Beijing claims approximately 90,000 sq km of Indian Territory in the state of Arunachal Pradesh.

According to “Times of India” in March 2020, V Muraleedharan Indian Junior foreign minister admitted that Indian Territory under the occupation of China in Ladakh is approximately 38,000 sq km. He also alleged that on March 2, 1963, Pakistan illegally ceded 5,180 sq km of Indian Territory in Kashmir to China. Whereas, factual position is, both China and Pakistan made an agreement, adjusted their boundaries and willingly surrendered their own areas to each other.

In this regard, China  handed over 1,942 sq km (750 sq mi) to Pakistan and Islamabad recognized Chinese sovereignty over 90000 sq km included 5,189 sq km in Northern Kashmir and Ladakh. But the stated agreement has never recognized by India, since she used to claim sovereignty over part of the land.

Notably, temperature between the forces of both countries is raising high day by day in Galwan Valley.   In this context, PLA Senior Colonel Zhang Shuili, spokesperson of  Western Theatre Command, Stated, “on September 7,  Indian army illegally crossed the LAC and entered in south bank of Pangong Lake and the Shenpao mountain area in   Western Sector of  Sino-Indian border.” He added that India should be ready to face the consequences of intrusions in Chinese area.

Anyhow, after emergence of CPEC and Kashmir issue, Indio-China Conflict now converted from bilateral to trilateral conflict between India, China and Pakistan. Though apparently, American President offered for mediation but his covert policy toward China and Pakistan is; to contain China, stop progress on CPEC, and create political, economic instability and unrest in Pakistan.

Extending militarily support to India and promoting Israeli relationship with Arab states, without satisfying Palestinian and Kashmiris where thousands of innocents people gun fired, hundreds of women raped and wounded would be considered against humanity and UN resolutions. Washington official stance is to support Taiwan against China.

On first week of September this year, USA spokesman expressed that Washington is going to establish a new bilateral economic dialogue with Taiwan and ready to support as per declassified six Reagan-era security assurances given to Taiwan.

The timings of strengthening ties with Taipei and supporting it, when China increasing pressure on Taiwan is amount to supplementing allies  to  narrow down clinch   around China and containing Beijing  expanding worldwide  influence. It is further added here that USA policies under President Trump are deteriorating and being unlike locally and globally.

But Trump popularity is declining speedily and chances are there that he may lose coming November elections. Therefore, as preemptive and to neutralize prevailing suppositions, he probably tasked his State Department Team, to take tough stand against China, so that loosing popularity could be stopped. Thus, State Department brought Taiwan, Israel, India and some of Middle East states, close to each other against Iran, Pakistan and China.

In Second week of September 20, while, launching campaign against China, The State Department’s top diplomat for East Asia, David Stilwell, told a virtual forum hosted by the conservative Heritage Foundation the latest USA moves were not a policy shift, but part of a set of “significant adjustments” within Washington’s longstanding “one China” policy.

Recently, India has also Inducted 36 French Dassault 4.5 generation Rafale Jets in Indian Air Force. She bought these aircraft to bolster its air fleet, considering preparing the force for a possible two-front war.  India preferred these aircraft over American F35 aircrafts but Washington did not object or shown any annoyance over the deal between Delhi and Paris.

Despite having nuclear arsenals India is piling up stacks of heavy weapons and yearly defence spending is over shooting every year. During this fiscal year, it touched US$65.86 Billion. In fact, the statement of American spokesman over prevailing Indo-China conflict, just reflect unending cold war between two super powers that may ultimately lead to global war.

Because, it believe that economic crisis, ulterior design of expansionism and domination were some major causes of global conflicts of past. The current Indo-China Conflict, Taiwan issue, burning Kashmir dispute, excessive USA immersion, backing Israel and India are similar nature of reasons to ignite initially the flash then griddling complete world into fire.

According to Stockholm International Peace Research Institute (SIPRI) 2020 report, India had 150, while China 320 and Pakistan 160 warheads. Pakistan has edge over India because she has in possession of tactical nuclear arsenals which are good enough to destroy Corps level forces including armour deployed against Pakistani Forces.

In short, UN Security Council should interfere and take steps to lessen the tension through resolving Ladakh and Kashmir issues on priority. In this connection both super powers particular Trump administration should show some responsibility instead taking actions to further provoke already tensed environment.