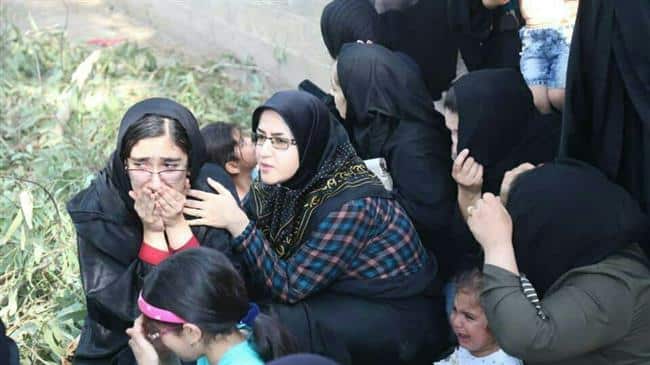 [ Editor’s Note: Color me surprised that Iran sat on this story until now. My first guess is that even with the military dignitaries there, they did not have enough security to intervene fast enough.

It is not like there were 10 or 15 attackers… but four. While the story says security intervened quickly, you can see two of the attackers chatting and standing still, sniper bait…like they did not have a care in the world about security forces.

Twenty five dead and 70 injured appears to have been something Iran did not want released at the time. One now has to wonder whether Iran’s support for the Houthis, getting them guidance systems to improve their missile and drone strikes on Saudi Arabia, might have been its ‘quiet’ response… Jim W. Dean ]

New and deeply disturbing footage shows a Saudi Arabia-backed terrorist group in the very act of a 2018 attack on a parade in southwestern Iran, which killed 25 people and injured 70 others, mostly civilian bystanders.

The video pertains to September that year, when the terrorist outfit known as al-Ahwaziya, struck a military parade in the city of Ahvaz, the capital of Khuzestan Province, before proudly claiming the atrocity.

In the footage, around five terrorists, four in fatigues and one plainclothes, are seen targeting civilians watching the parade, which was held by Iran’s Army and the Islamic Revolution Guards Corps (IRGC). The plainclothes attacker tries to advance far ahead of the others, who intend to cover him by shooting at nearby bystanders and firing wildly in the general direction of the grandstand that was hosting military top brass.

Caution! This video may be shocking to some.

Iranian defense forces are also seen intervening fast, with snipers targeting and neutralizing two of those in fatigues. The plainclothes attacker is then seen fleeing back from the site of the attack, but is similarly gunned down in the process.

This article is the second in a series called “The Islamic Republic at 40” to mark the 40th anniversary of the Islamic Revolution, which falls on February 11, 2019 on the Gregorian calendar.

The sheer gore of the incident, however, did not bring any Western media outlet to recognize it as a terrorist attack.

Shortly after the attack, the London-based Iran International television channel that is funded by Saudi Arabia even allowed the terrorist group spokesman to go live on air to defend the bloodshed.

Reactions to attack: How West sees it differently

The Western and Saudi media have refrained from terming the deadly attack in the Iranian city of Ahvaz a terrorist act despite the large number of civilian casualties in the incident.

Following the broadcast, the Iranian Embassy in London filed a lawsuit against Iran International with the UK’s communications regulator.

Iran’s Ambassador Hamid Baeidinejad tweeted back then, saying “’Iran International’ has shamefully broadcast an interview with the spokesperson of the terrorist group behind today’s terrorist attack in Ahwaz. We condemn this heinous act and will pursue formally with Ofcom to investigate it as an act in supporting terrorism and violence.”

“Iran International” has shamefully broadcast an interview with the spokesperson of the terrorist group behind today’s terrorist attack in Ahwaz. We condemn this heinous act and will pursue formally with Ofcom to investigate it as an act in supporting terrorism and violence.

“The Iranian embassy in London has taken its official lawsuit to ‘Ofcom’ [asking it] to investigate the Iran International TV channel’s illegal move to broadcast an interview with the spokesman of the [al-Ahwaziya] terrorist group,” Iranian ambassador to London Hamid Baeidinejad said in another tweet.

Ofcom, however, ruled that the TV station had not breached its broadcasting guidelines by hosting the interview.

Iran files a lawsuit against a London-based TV channel at Ofcom over its support and promotion of terrorism.

Iran’s response to the attack was also swift, with the IRGC raining surface-to-surface ballistic missiles on the gathering of Daesh ringleaders in an area east of the Euphrates in Syria, which left many casualties.

Riyadh is widely believed to be a key sponsor of Takfiri terrorists, who are inspired by Wahhabism, an extremist ideology preached by Saudi clerics.