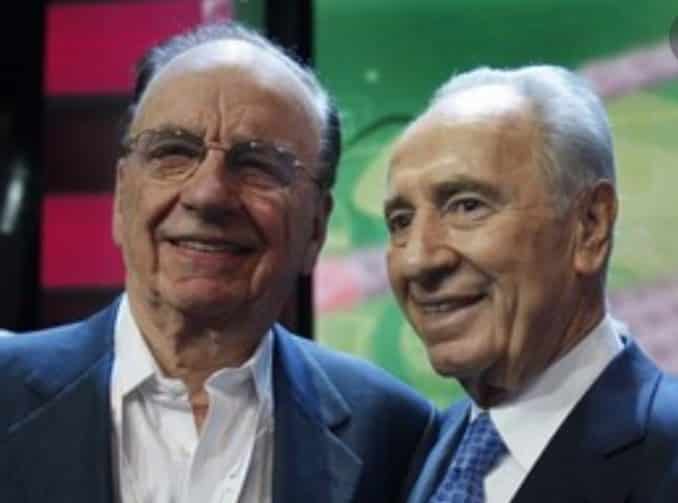 Our issue?  When Trump blames ‘fake news,’ he is blaming his best friends and allies, fake president, fake news…

Christopher Bollyn is an investigative journalist who has written extensively on the events of September 11, 2001 in the Washington-based American Free Press. He has researched different aspects of the 9/11 attacks and uncovered facts and evidence that challenge the official version of events.

Fox News tried to smear Bollyn as an “anti-Semite” in order to discredit him and diminish the significance of his work. At the helm of both organizations, the ADL and Fox News, is an Australian-born Zionist named Keith Rupert Murdoch.

Murdoch “became an American citizen for business reasons,” according to Richard H. Curtiss, editor of the Washington Report on Middle East Affairs.

Keith Rupert was born in Melbourne, Australia, on March 11, 1931. “Rupert’s father, Sir Keith Murdoch, was a newspaper publisher, and his mother an Orthodox Jew,” Curtiss wrote, “although Murdoch never offers that information in his biographies.”

Murdoch’s father married Elisabeth Joy Greene, daughter of Rupert Greene in 1928. They had one son, Keith Rupert and three daughters. Later in life, Keith Rupert chose to use Rupert, the first name of his Jewish maternal grandfather.

The young Keith Rupert was educated at Australia’s fashionable Geelong private school, and went on to the elitist and aristocratic Oxford University in England, according to Candour (UK) magazine.

“Rupert’s father Sir Keith Murdoch attained his prominent position in Australian society through a fortuitous marriage to the daughter of a wealthy Jewish family, née Elisabeth Joy Greene. Through his wife’s connections, Keith Murdoch was subsequently promoted from reporter to chairman of the British-owned newspaper where he worked. There was enough money to buy himself a knighthood of the British realm, two newspapers in Adelaide, South Australia, and a radio station in a faraway mining town,” Candour wrote in 1984. “For some reason, Murdoch has always tried to hide the fact that his pious mother brought him up as a Jew.”

While Murdoch may have “tried to hide” his Jewish roots, he has been quite forthright about his support for extreme right-wing Zionists, such as Benjamin Netanyahu and Ariel Sharon.

Netanyahu, who wrote a book entitled The War on Terror: How the West Can Win in 1986, is a frequent commentator on Murdoch’s Fox News.

Murdoch’s support for Zionism extremists is well known and a matter of record. As New York Governor George Pataki said, “There is no newspaper in the U.S. more supportive of Israel than the [Murdoch’s] New York Post.”

It is through a network of Zionist organizations, in which Murdoch plays a central role, that Murdoch is connected to the individuals who arranged the privatization – and obtained control of the World Trade Center – shortly before its destruction.

These key individuals are: Larry Silverstein and the former Israeli commando Frank Lowy, the lease holders of dubious repute who gained control of the WTC property six weeks before 9/11, and Port Authority Chairman Lewis M. Eisenberg, who authorized the transfer of the leases.

Murdoch belongs to, and has been honored by, a number of leading Zionist organizations in which Silverstein, Lowy, and Eisenberg all hold senior positions. These organizations include the Anti-Defamation League (ADL), the United Jewish Appeal (UJA), and the New York-based Museum of Jewish Heritage – A Living Memorial to the Holocaust.

Fifty days before 9/11, Silverstein Properties and Lowy’s Westfield America secured 99-year leases on the WTC. The Port Authority of New York and New Jersey turned control of the World Trade Center over to the private hands of Silverstein and Lowy on July 24, 2001.

Lowy leased the shopping concourse called the Mall at the World Trade Center, which comprised about 427,000 square feet of retail space.

“Six weeks before the WTC towers were destroyed, the Port Authority completed the process of leasing them for 99 years to Larry Silverstein, the developer who had built 7 World Trade Center [which mysteriously self-demolished at 5:25 p.m. on 9/11].

“Simultaneously, the retail space underneath the complex was leased to Westfield America, the US division of an Australian company that is one of the world’s largest operators of shopping malls.” Paul Goldberger wrote in New Yorker, May 20, 2002.

Silverstein is suing for some $7.2 billion in insurance money for the loss of the destroyed World Trade Center – and his expected earnings – for property he had leased with a down payment of $100 million – of borrowed funds.

“Murdoch is a close friend of Ariel Sharon,” Sam Kiley, The Times (UK) veteran journalist on the Middle East wrote about the man who took over the once famous British paper. Kiley said Murdoch’s friendship with the Israeli prime minister had caused senior staff at the paper to rewrite important copy.

“Murdoch’s executives were so afraid of irritating him [the PM] that, when I pulled off a little scoop of tracking down and photographing the unit in the Israeli army which killed Mohammed al-Durrah, the 12-year-old boy whose death was captured on film and became the iconic image of the conflict, I was asked to file the piece ‘without mentioning the dead kid.’” Kiley wrote.

“After that conversation, I was left wordless, so I quit.”

Sharon and Murdoch are old friends. On Oct. 15, 1982, a month after the massacres of thousands of Palestinian refugees in the Sabra and Shatila camps of Beirut, war crimes which occurred under Sharon’s direct command, the Israeli defense minister held meetings with Rupert Murdoch and others, reportedly in order to advance his “West Bank real estate grab.”

This is the Sabra and Shatilla monument over the mass grave of the victims. June, 2014, on my way to the Syrian elections (Jim Dean cloud archive)

The visit with Sharon included a trip for Murdoch and his editors from New York and London that “took them on a bird’s-eye tour of Israel aboard a helicopter gunship, flying over the Golan Heights, West Bank and settlements.”

“I have always believed in the future of Israel and the goals of the international Jewish community,” Murdoch said at a spring fund-raiser for the Museum of Jewish Heritage – A Living Memorial to the Holocaust on April 29, 2001.

From the beginning, News Corp., his global media company, “has been supportive of the Jewish national cause,” Murdoch said.

Larry Silverstein, who had not yet acquired the lease on the World Trade Center, attended the fund-raiser with Murdoch and reportedly said about museum chairman Robert Morgenthau’s plans to expand the museum: “I’ll support you…as long as you keep it under 110 stories.”

Murdoch and the ADL

“Henry Kissinger, Rupert Murdoch and Mortimer Zuckerman are on the [ADL] dinner committee,” according to a recent New York Times report on the ADL’s recent fund-raiser in which the controversial Italian prime minister Silvio Berlusconi received the ADL’s Distinguished Statesman Award.

Silverstein and Eisenberg have both held senior leadership positions with the United Jewish Appeal (UJA), a billion dollar Zionist “charity” organization, to which Murdoch and Lowy generously contribute.

In 1997, Henry Kissinger presented Murdoch with the UJA’s award for “Humanitarian of the Year.”

Silverstein is a former chairman of UJA. This organization raises hundreds of millions of dollars every year for a network of Zionist agencies in the United States and Israel. Eisenberg, who was instrumental in obtaining the lease for Silverstein, is on the Planning Board of UJA.

Eisenberg in his role with the Port Authority was the key person who negotiated the 99-year leases for Silverstein and Frank Lowy’s Westfield America, who were in fact the low-bidders for the lease on the 110-story towers and the retail mall.

Murdoch and the Czechoslovakian-born Israeli commando Frank Lowy, a former fighter in Israel’s Golani Brigade, who emigrated to Australia in the 1950s, have had a long friendship, which Murdoch recounted during an American Australian Association fund-raising dinner in honor of Frank’s son, Peter S. Lowy, in New York on November 20, 2002. Larry Silverstein and his wife also attended the American Australian event.

Some reporters refer to the American Australian Association, whose membership includes James Wolfensohn, the president of the World Bank, who raised cash for Rupert Murdoch when he first expanded into the United States, as “the kangaroo mafia.”

“Frank was a brave and determined fighter,” Rafi Kocer, Lowy’s former commander, said. Lowy has donated some $350,000 to build a memorial museum in Israel for his former brigade.

Today, Lowy and his three sons control Westfield Corporation, one of the largest operators of shopping centers in the United States – and the world.

“Frank Lowy, who emigrated to Australia from Israel in 1952, owns the 99-year lease for the 425,000 square foot retail portion of the destroyed World Trade Center…Westfield said today that it has insurance cover against terrorist attacks and its earnings will not be materially affected.”

Lowy, is described by the Sydney Morning Herald as “a self-made man with a strong interest in the Holocaust and Israeli politics.”