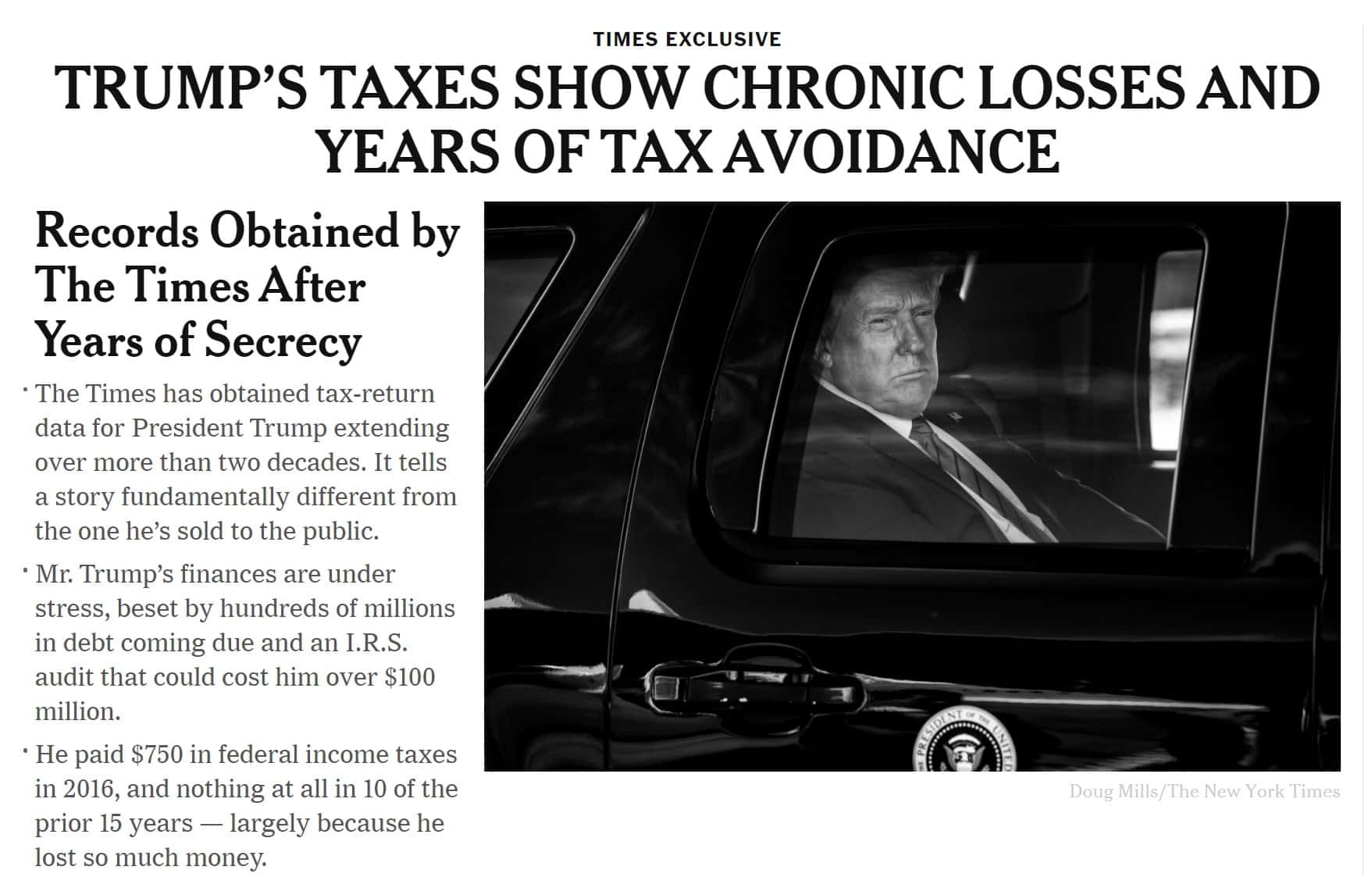 This is why Trump hid his tax returns. He doesn’t pay any.

And he paid no income taxes at all in 10 of the previous 15 years. https://t.co/fLdiXZpiUl

Donald Trump, a self-proclaimed billionaire, paid only $750 in federal income taxes in the year he was elected US president, according to a stunning New York Times investigation that could shake up the presidential election.

New York Times: Donald Trump paid no income taxes in 10 of past 15 years beginning in 2000 https://t.co/gqpAGb0MMh

“Trump taxes show chronic losses and years of tax avoidance,” was the banner headline on the paper’s website on Sunday. The president’s tax returns have long been the holy grail of American political reporting.

The president “paid $750 in federal income taxes the year he won the presidency”, the paper reported, adding that “in his first year in the White House, he paid another $750.

“He had paid no income taxes at all in 10 of the previous 15 years – largely because he reported losing much more money than he made.”

In all, the paper said, Trump paid no federal income taxes in 11 of 18 years its reporters examined. Many of his businesses, including his golf courses, report significant financial losses – which have helped him to lower his taxes.

President Trump paid only $750 in federal income taxes the year he ran for president and in his first year in the White House, according to an investigation by The New York Times.https://t.co/OPRcoBQXp1

The Times also said the documents it had obtained “comprise information that Mr Trump has disclosed to the IRS, not the findings of an independent financial examination. They report that Mr Trump owns hundreds of millions of dollars in valuable assets, but they do not reveal his true wealth. Nor do they reveal any previously unreported connections to Russia.”

The paper said it would not publish the documents, in order to protect its source.

At a White House press briefing on Sunday, Trump made wild allegations about plots against him and about Biden, who he will debate for the first time on Tuesday. Eventually, he dismissed the Times report as “totally fake news”.

President Trump paid $750 in federal income taxes in 2016, and nothing in 10 of the prior 15 years — largely because he reported losing much more money than he made.

Read the takeaways from our exclusive look at decades of Trump’s tax records. https://t.co/2djvJqhdzB

He said: “We went through the same stories, you could have asked me the same questions four years ago, I had to litigate this and talk about it.