How do you rescue someone you love from the clutches of an internet conspiracy cult?

How QAnon is attracting cops https://t.co/oShBqIvkqu via @MotherJones

Do you maybe tell them that the operator of the “most prominent” website devoted to the unhinged, fact-free QAnon conspiracy theory was recently rumbled as a senior vice-president at Citibank?

According to reports, Jason Gelinas was a “longtime Wall Street IT expert” with a noteworthy professional interest in data mining.

He perhaps knew better than most how susceptible people are to advertising when they’re angry and they’re frightened; reports claim he was earning $US3,000 a month from Q-adherents on his Patreon site, and suspected of compiling data on 10 million site visitors willing to believe – without evidence – that a network of Hollywood satanists run vast underground camps where raped children are milked for blood.

It’s an unquestioning credulity that would have any marketer salivating. 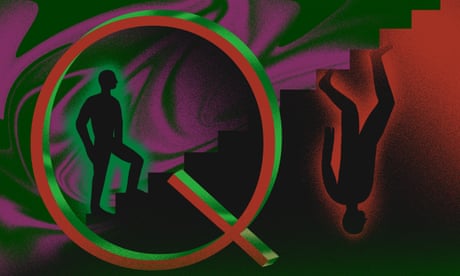 The QAnon orphans: people who have lost loved ones to conspiracy theories

Alas, the truth has done little to dissuade QAnon believers from the fictions of their conspiracy mythology.

Unsurprisingly, the “Pizzagate” conspiracy that was QAnon’s forerunner should have fallen apart when an adherent wielded an assault rifle in a Washington pizzeria because he believed Hillary Clinton and her associates were running a child sex ring in its basement. The gunman found no Clinton, no children and no basement – and yet the themes of the conspiracy endure, and internationally.

Yes, we have a QAnon problem in Australia now, too.

Condemning QAnon and rejecting the conspiracy theories it promotes.

IN THE HOUSE OF REPRESENTATIVES
September 25, 2020

Mr. Malinowski (for himself, Mr. Riggleman, Mr. Gottheimer, Mr. Kinzinger, Mrs. Luria, and Mr. Fitzpatrick) submitted the following resolution; which was referred to the Committee on the Judiciary, and in addition to the Permanent Select Committee on Intelligence, for a period to be subsequently determined by the Speaker, in each case for consideration of such provisions as fall within the jurisdiction of the committee concerned

Condemning QAnon and rejecting the conspiracy theories it promotes.

Whereas, throughout history, conspiracy theories that falsely blame secret cabals or marginalized groups for society’s ills have fueled prejudice, genocide, and acts of terrorism;

Whereas QAnon is a movement promoting a collection of unfounded conspiracy theories that have spread widely on the internet since 2017;

Whereas QAnon initially alleged that prominent Americans are engaged in a secret plot to control the world, while using their power to exploit children, and has expanded to embrace virtually every popular conspiracy theory of the last several decades, from questioning the truth about the September 11th terrorist attacks to believing in alien landings, to denying the safety of vaccines;

Whereas many QAnon followers express anti-Semitic views, and the Anti-Defamation League has said that the movement’s central conspiracy theory includes anti-Semitic elements;

Whereas the Federal Bureau of Investigation (FBI) has assessed with high confidence that “fringe political conspiracy theories”, including QAnon, “very likely motivate some domestic extremists, wholly or in part, to engage in criminal or violent activity”, and that these conspiracy theories “very likely encourage the targeting of specific people, places and organizations, thereby increasing the likelihood of violence against these targets”;

Whereas the FBI bases this assessment on “events in which individuals committed crimes, plotted attacks, or successfully carried out deadly violence, and who—either before or after their arrests—attributed their actions to their conspiratorial beliefs”;

Whereas QAnon adherents have been implicated in crimes that they claim their QAnon beliefs inspired, including—

(1) a man arrested in 2018 for plotting to plant a bomb in the Illinois Capitol rotunda to make Americans aware of the “Pizzagate” conspiracy theory;

(2) a man arrested in 2018 for using an armored car to block traffic on the Hoover Dam Bypass Bridge;

(3) a man in Arizona arrested in 2019 for vandalizing a Catholic church;

(4) a woman in Colorado arrested in 2019 for plotting an armed raid to kidnap her child, who had been taken from her custody;

(5) a man charged with the murder of an organized crime boss in New York in 2019; and

(6) a woman arrested in New York with a car full of knives after posting a video accusing Joe Biden of participating in child sex trafficking and threatening to kill him;

Whereas the FBI further assesses that “these conspiracy theories very likely will emerge, spread and evolve in the modern information marketplace . . . fostering anti-government sentiment, racial and religious prejudice, [and] increasing political tensions”;

Whereas, according to the Combating Terrorism Center at the United States Military Academy at West Point, “QAnon is arguably no longer simply a fringe conspiracy theory but an ideology that has demonstrated its capacity to radicalize to violence individuals at an alarming speed”;

Whereas Facebook, Twitter, and Google have removed or blocked QAnon groups and content from their platforms for violating their policies against misinformation, bullying, hate speech, and harassment;

Whereas QAnon adherents have been harming legitimate efforts to combat child exploitation and sex trafficking, including by overwhelming antitrafficking hotlines with false reports;

Whereas the conspiracy theories promoted by QAnon undermine trust in America’s democratic institutions, encourage rejection of objective reality, and deepen our Nation’s political polarization; and

Whereas our Nation’s polarization is further accentuated by others, from the far left to the far right, promoting extreme ideologies and antigovernment conspiracy theories, hijacking legitimate peaceful protests, and encouraging followers to damage, deface, or vandalize local, State, and Federal Government properties and to attack law enforcement: Now, therefore, be it

Resolved, That the House of Representatives—

(1) condemns QAnon and rejects the conspiracy theories it promotes;

(2) condemns all other groups and ideologies, from the far left to the far right, that contribute to the spread of unfounded conspiracy theories and that encourage Americans to destroy public and private property and attack law enforcement officers;

(3) encourages the Federal Bureau of Investigation, as well as all Federal law enforcement and homeland security agencies, to continue to strengthen their focus on preventing violence, threats, harassment, and other criminal activity by extremists motivated by fringe political conspiracy theories;

(4) encourages the intelligence community to uncover any foreign support, assistance, or online amplification QAnon receives, as well as any QAnon affiliations, coordination, and contacts with foreign extremist organizations or groups espousing violence; and

(5) urges all Americans, regardless of our beliefs or partisan affiliation, to seek information from authoritative sources and to engage in political debate from a common factual foundation.