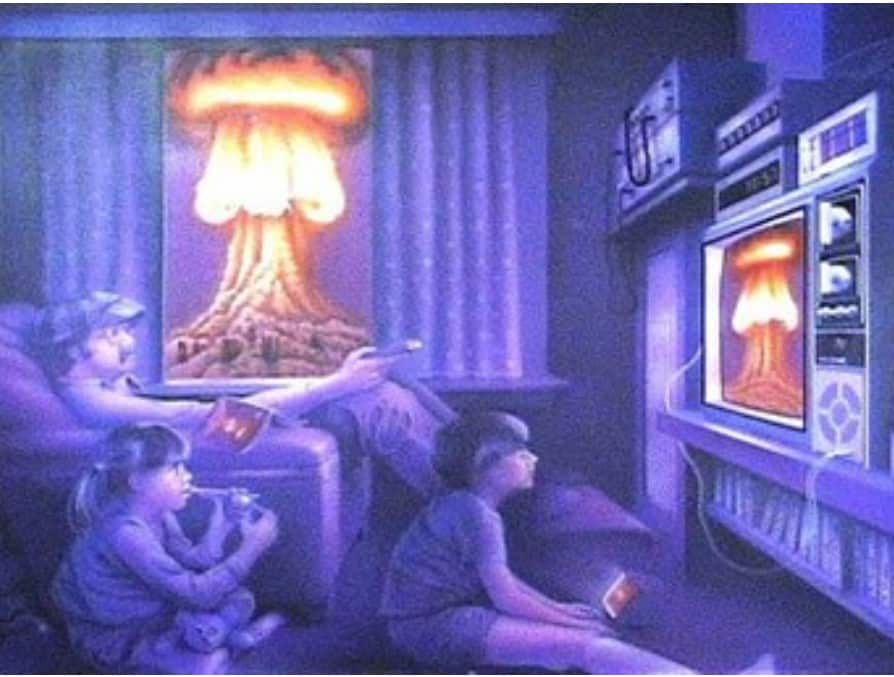 A nation of apathetic and complacent spectators watch their world explode in between commercial breaks.

The United States is over 230 years old and is now firmly entrenched in the seventh stage of all civilizations (Apathy) with only Dependence and eventually Bondage ahead of it. Apathy is the glove into which evil slips its eager hand

The average age of the world’s greatest civilizations has been two hundred years. These nations have progressed through a nine stage sequence: From bondage to spiritual faith; from spiritual faith to great courage; from courage to liberty; from liberty to abundance; from abundance to selfishness; from selfishness to complacency; from complacence to apathy; from apathy to dependence; from dependency back again into bondage.

In our present Plutocracy we have just made the transition from complacency to national apathy, which will surely be followed by dependence on the state and eventually bondage by the state.

”We’re not a democracy. It’s a terrible misunderstanding and a slander to the idea of democracy to call us that. In reality, we’re a plutocracy: a government by the wealthy.”

The obvious vehicle for this rapid shift in consciousness is FEAR and APATHY. FEAR, in actuality, is False Exaggerations Appearing Real (under the guise of National Security) but APATHY is a lack of interest and indifference and it has always been the Great American Sin.

Joseph Fort Newman, Atlantic Monthly, wrote about the Great American Sin of Apathy in October, 1922, and it’s worth repeating now in March, 2012,

”What is the great American sin? Extravagance? Vice? Graft?

”No; it is a kind of half-humorous, good-natured indifference, a lack of “concentrated indignation” as my English friend calls it, which allows extravagance and vice to flourish.

”Trace most of our ills to their source, and it is found that they exist by virtue of an easy-going, fatalistic indifference which dislikes to have its comfort disturbed….

”The most shameless greed, the most sickening industrial atrocities, the most appalling public scandals are exposed, but a half-cynical and wholly indifferent public passes them by with hardly a shrug of the shoulders; and they are lost in the medley of events. This is the great American sin.”

Unless we as individuals, and then as a nation, conquer fear and apathy we are doomed to dependence and then bondage by a state ruled by the wealthy. That state of dependence is drawing near and only faith and the great courage of civil revolt and even civil disobedience can revitalize this nation particularly with a major economic depression already underway.

Paul Fay, Real News, interviews Col. Lawrence Wilkerson on the fact that Obama, Panetta and Holder are undermining basic constitutional rights by justifying killing American citizens without judicial process and bypassing Congress in declaring war without congressional approval, and always under the guise of national security.

Wilkerson expounds that the executive branch of the government has seized power contrary to the voice of the people which will eventually lead to tyranny.

“The more power you accumulate, the more likely you will abuse it”

And Tyranny and Dependence  is the eighth step in the fall of civilizations ~ only to be followed by Bondage. In many ways George Orwell’s Oceania has nothing on 2012 America as Paul Joseph Watson wrote last year in Infowars.com,

“Americans are now living in a society that in some cases is more draconian, more invasive and more Orwellian than the dystopian tyranny fictionalized in Orwell’s chilling classic Nineteen Eighty-Four. On almost every front, American citizens are under an equal or greater threat of abuse, control and more pervasive and high-tech surveillance than anything Winston Smith ever faced.”

And here’s the proof that Oceania is almost here. Wired magazine’s April cover story covers the current construction of the blandly named Utah Data Center, which is being built for the National Security Agency.

“A project of immense secrecy, it is the final piece in a complex puzzle assembled over the past decade. Its purpose: to intercept, decipher, analyze, and store vast swaths of the world’s communications as they zap down from satellites and zip through the underground and undersea cables of international, foreign, and domestic networks.

“The heavily fortified $2 billion center should be up and running in September 2013….

“It is, in some measure, the realization of the “total information awareness” program created during the first term of the Bush administration, an effort that was killed by Congress in 2003 after it caused an outcry over its potential for invading Americans’ privacy.”

In other words, in just over one year, virtually anything one communicates through any traceable medium ~ which these days is virtually everything ~ will unofficially be property of the US government to deal with as it sees fit.

The codename of the project is  Stellar Wind.

As Wired says, “there is no doubt that NSA has transformed itself into the largest, most covert, and potentially most intrusive intelligence agency ever created.”

William Binney, a former NSA official as well as senior NSA crypto-mathematician largely responsible for automating the agency’s worldwide eavesdropping network, has gone on record (in Wired) to describe Stellar Wind, and offers the best summation of its consequences to all Americans.

“We are, like, that far from a turnkey totalitarian state.”.

And thus the stage will soon be set for America’s shift from Apathy to the eighth stage of a civilization’s collapse, Dependence on the State which will be quickly followed by Bondage to the State and Orwell’s prophetic words will finally become a reality.

“There was of course no way of knowing whether you were being watched at any given moment. How often, or on what system, the Thought Police plugged in on any individual wire was guesswork. It was even conceivable that they watched everybody all the time. But at any rate they could plug in your wire whenever they wanted to.

“You had to live, did live, from habit that became instinct, in the assumption that every sound you made was overheard, and, except in darkness, every movement scrutinized.”

If you’re not outraged, you’re on life support.

About the Author: Allen L Roland is a Freelance Alternative Press Online columnist. He is also a practicing psychotherapist, author and lecturer who also shares a daily political and social commentary on his web site at AllenRoland.com. He also guest hosts a Truthtalk, a national radio show that airs monthly. He is available for comments, interviews, speaking engagements and private consultations via email at [email protected].