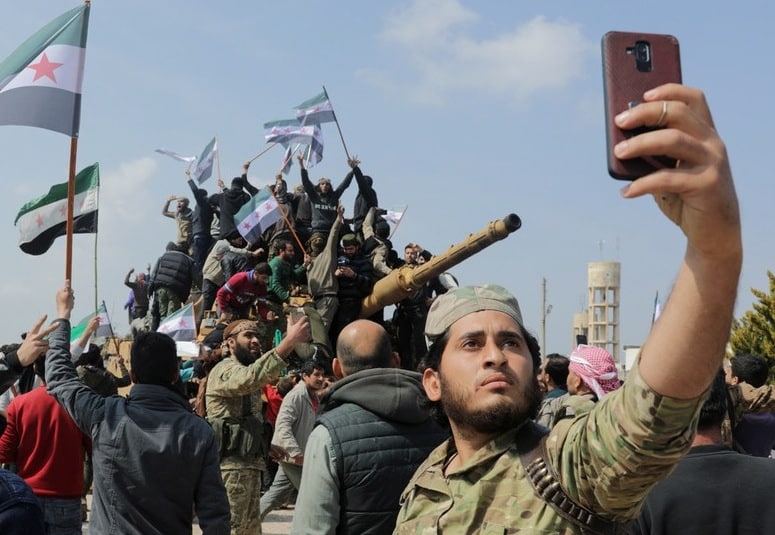 «According to incoming reports, militants from illegal armed units are being moved to the Nagorno-Karabakh conflict zone from Syria and Libya to take a direct part in the hostilities».

The statement was released in the evening by the Ministry of Foreign Affairs of the Russian Federation on its official website.

This sentence officially confirms the journalistic advances of South Front, Veterans Today, The Guardian and Russia Today in relation to the dispatch of jihadists recruited by Turkey to support Azerbaijani Muslim allies

«We are seriously concerned about this development that not only escalates tensions in the conflict zone but also creates long-term security threats for all countries in the region» said the Information and Press Department.

«We urge the leaders of the interested states to take effective measures to prevent the use of foreign terrorists and mercenaries in the conflict, and we call for their immediate withdrawal from the region» concluded Russian MFA.

«While the Western media outlets made sure to note they could not independently verify the claims of the militants they interviewed, a French investigative journalist appears to have managed to do so.

About 1,000 fighters from the Al Hamza and Sultan Murad divisions of militants from Idlib were recruited and flown to Azerbaijan since mid-September, according to Guillaume Perrier, who provided the details about their wages, which amount to $1,000 or so a month» wrote Russia Today.

At least two of these militants have been killed since Sunday, Perrier said. This was when the Azeri military opened fire on ethnic Armenian forces in Nagorno-Karabakh, claiming they were responding to “provocations.”

In the battle ground, meanwhile, Azerbaijan claims to have killed or wounded more than 2,000 Armenian troops during four days of fierce fighting in the contested Nagorno-Karabakh region. Yerevan’s own estimate of losses sustained, so far, is considerably lower.

Around 2,300 “enemy personnel” have been killed or wounded since fighting broke out at the weekend, Azerbaijan’s Defense Ministry reported on Wednesday. Officials added that an Armenian S-300 air defense missile system was destroyed at the frontline in Karabakh, along with around 130 tanks and more than 200 artillery pieces.

One of several border disputes left over from the collapse of the Soviet Union, Nagorno-Karabakh is an enclave predominantly populated by Armenians that seceded from Azerbaijan in 1988 and declared itself the Republic of Artsakh.

A bitter war in 1991-94 left most of Nagorno-Karabakh under Armenian control, along with a territory linking it to Armenia proper. Azerbaijan is insisting on retaking the territory, and Baku’s most recent push to do so has been backed by neighboring Turkey.

Turkey, thanks to the direction of its powerful MIT counter-intelligence service specialized in transforming the jihadists of Al Qaeda and ISIS into carefully trained precious mercenaries, proposes itself on the world stage as a “contractor factory” available to set fire to conflicts.

Especially in the harshest ones where, as now in Armenia and Azerbajan, countries of different ethnic majority are opposed: the Armenian Christians, already exterminated by the Ottoman Empire between 1915 and 1916 in one of the most serious genocides in history, and the Muslims.

This determines an escalation of military clashes with a spiral of violence that can last for years as in Syria and Libya, fueling that Weapons Lobby that sees the Muslim Brotherhood of Turkey and Qatar in business with the West and in particular with the United Kingdom and Italy, as demonstrated in the previous dossier (link below).

by Russia Today
Rebels from Syria’s Idlib province are being recruited by Turkey to fight in Azerbaijan’s conflict with Armenia over Nagorno-Karabakh, just as it has done in Libya, the Guardian reported citing several of the militants.

Idlib is Syria’s northwestern province, and the last bastion of the Turkish-backed militants once hoping to effect regime change in Damascus. It is there the recruitment drive for Azerbaijan began a month ago, three rebels told the Guardian’s Bethan McKernan.

Two brothers from Azaz said they had been summoned to a camp in Afrin on September 13 and told by a commander in the Sultan Murad Division that three- or six-month contracts were available “guarding observation posts and oil and gas facilities” in Azerbaijan for 7,000-10,000 Turkish lira a month.

That works out to roughly $900-1300 a month, and is a princely sum compared to the monthly wage of 450-550 Turkish lira a month ($57-70) that Ankara pays the militants to fight against the government of President Bashar Assad.

For at least the past two weeks Turkey has been signing up Syrian rebel fighters to deploy to Azerbaijan as private mercenaries – cracking scoop from @mck_beth. Underlines Erdogan’s ambitions, further complicates conflict with Armenia & will alarm Moscow https://t.co/O6YAitHgKE

“Our leader told us that we won’t be fighting, just assisting in guarding some areas,” said one of the men, whom the outlet named as Muhammad. “Our salaries aren’t enough for living, so we see it a great opportunity to make money.”

“There are no jobs available,” added his brother, Mahmoud. “I used to work as a tailor in Aleppo but since we were displaced to Azaz, I’ve tried many times to practise my craft but my family and I can’t earn enough.”

It was implied that the militants would be taking the job, though they could not say what exactly it entailed, for how long, when they were expected to leave – or even the name of the Turkish security company officially hiring them.

Another militant, who also asked for his name to be changed, said he and 150 other men were summoned to Afrin on September 22, but then told their departure had been delayed. He had promised $200 from the first paycheck to a local broker to sign him up for the job.

“When we first started being offered work abroad in Libya, people were afraid to go there, but now there are definitely thousands of us who are willing to go to either Libya or Azerbaijan,” he told the Guardian.

Reuters also reported the recruitment of Syrian militants on Monday, citing two of the fighters who had fought for Ahrar al-Sham jihadists, and volunteered for Azerbaijan after being promised $1,500 a month.

“I didn’t want to go, but I don’t have any money. Life is very hard and poor,” one of the militants told Reuters. The agency said it could not independently verify their accounts.

Turkey has previously been accused of sending Syrian militants to Libya, to fight for the Turkish-backed government against the Libyan National Army of General Khalifa Haftar. On Monday, the Armenian ambassador to Russia said that around 4,000 militants from northern Syria were sent by Turkey to Azerbaijan, as fighting broke out over the disputed region of Nagorno-Karabakh.

ALSO ON RT.COM Armenia claims Azerbaijani artillery attacks are intensifying as Nagorno-Karabakh officials allege they’ve downed Azeri warplaneAn aide to Azeri President Ilham Aliyev dismissed those claims as “complete nonsense” and “another provocation from the Armenian side.” A source in the Turkish defense ministry likewise told the Guardian that Ankara “does not deal with recruiting or transfering militiamen anywhere in the world,” but would not go on the record.

The Guardian cited unnamed sources in the Syrian National Army as saying that a first group of some 500 Syrian militants has already arrived in Azerbaijan, including senior commanders Fahim Eissa of the Sultan Murad Division and Saif Abu Bakir of the Al Hamza. The UK-based Syrian Observatory for Human Rights claimed as many as 1,000 fighters could be headed for Azerbaijan.

The Guardian said it could not verify either of those claims.Some of the men who went to Libya said they had been told they would be working as security guards, but ended up fighting on the front lines instead. They also said their commanders would take up to 20 percent of their wages.

Nagorno-Karabakh is one of several border disputes left over from the collapse of the Soviet Union. An enclave predominantly populated by Armenians, it seceded from Azerbaijan in 1988 and declared itself the Republic of Artsakh following a bitter war in 1992-94.