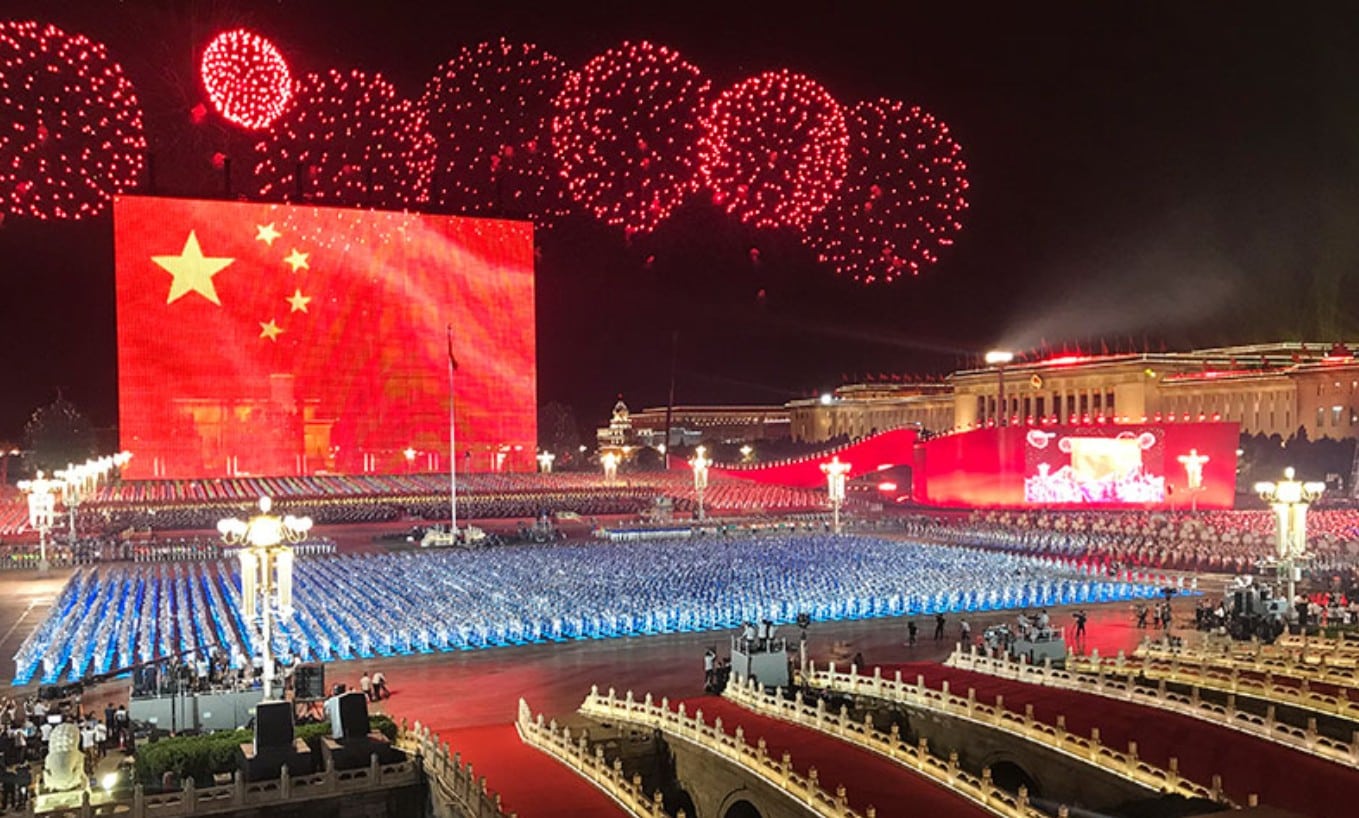 Chinese National Day is celebrated on October 1st every year to commemorate the founding of People’s Republic of China. On this very day, lots of large-scaled activities are held nationwide. The 7-day holiday from October 1st to 7th is called ‘Golden Week’.

Last year, standing in Beijing’s Tiananmen Square, where Chairman Mao Zedong announced the formation of the People’s Republic of China (PRC) on October 1, 1949 after communist forces won a bloody civil war by defeating the ruling Kuomintang (KMT)-National Party, supported by the imperialist powers, President Xi Jinping said in his address:

“There is no force that can shake the foundation of this great nation”.

During the National Day, the military parade in the Tiananmen Square in Beijing is followed by about 100,000 civilian performers. The nation’s newest military technology is on full display, which includes military tanks, helicopters, fighting aircraft and the DF-41-China’s new intercontinental ballistic missiles.

“For a long time experts have been speaking about China’s rapid military modernisation referring to it as a rising power…Modern China has developed at an extraordinary pace…stood up, grown rich and become stronger over the past decades…America no longer enjoys military primacy in the Indo-Pacific…its capacity to uphold a favourable balance of power is increasingly uncertain”.

In this respect, the European Union’s foreign affairs Chief Josep Borrell admitted on May 25, this year that in Asia, China is “replacing the United States as the center of global power”.

Nevertheless, new cold war has started between China and the US, as in the recent past, the rift which apparently began from banning applications, escalated when both Beijing and Washington closed each other’s consulates, resulting in deportation and imposing of sanctions over various lawmakers and personalities.

And to aggravate all concerns regarding China’s activities in the South China Sea, the maritime military exercises led by American military near Hawaii—ten countries which participated in the exercises were Australia, Brunei, Canada, France, Japan, North Korea, New Zealand, Philippines, Singapore, and the US itself were a signal to China from the US that it is forming an alliance against China.

Recently, US President Donald Trump has said that he wants a new nuclear agreement to be signed by both Russia and China, replacing the Intermediate-Range Nuclear Forces Treaty from which the US withdrew on September 18, 2020. While, on September 19, this year, US Defense Secretary Mark Esper stated that Washington wants to quickly deploy new intermediate-range missiles in Asia, to counter the rise of China in the region.

Meanwhile, very tensions arose between India and China, including Pakistan when on August 5, 2019, Indian extremist government revoked articles 35A and 370 of the Constitution, which gave a special status to the disputed territory of the Indian Illegally Occupied Jammu and Kashmir (IIOJK).

The act split IOJK which includes the Kashmir Valley and the Ladakh area into two federal territories: Jammu and Kashmir and Ladakh area, which will be ruled directly from New Delhi. India also issued an infamous map on October 31, 2019 which displayed these divisions.

Besides Pakistan, China also rejected the Indian malicious acts as “unlawful and void”, saying that India’s decision to “include” some of China’s territory into its administrative jurisdiction “challenged” Beijing’s sovereignty. Border dispute between New Delhi and Beijing, which remains unsettled, has increased tension between the two countries. US-led some major countries are siding with India as part of anti-China approach.

India was openly opposing the CPEC; the US also joined New Delhi. In this respect, the Chinese Consul General in Karachi, Li Bijian stated on September 8, 2020: “China-Pakistan Economic Corridor will continue to grow and expand despite the negative propaganda by certain countries”.

Chief of Army Staff General Qamar Javed Bajwa met the Chinese ambassador on September 12, this year and assured him that the CPEC is Pakistan’s economic future and its security will not be compromised.

Meantime, the Trump administration said on September 18, 2020 that it would bar the Chinese-owned mobile apps WeChat and TikTok from US app-a significant escalation in America’s tech-fight with China.

It is mentionable that owing to lack of respect for the neighbouring countries by Indian Prime Minister Minister Narendra Modi-the leader of the extremist ruling party BJP, Bangladesh, Sri Lanka and Nepal are tilting toward China.

Even, Indian analysts said that Bangladesh’s pro-Indian Prime Minister “Sheikh Hasina has not met India’s high commissioner despite repeated requests. With each of our South Asian neighbours—our relations with them are predominantly discordant…Despite India’s concern, Bangladesh has given the contract of building an airport terminal in Sylhet to a Chinese company”.

The Hindu wrote: “A similar move was recorded in Iran, which has decided to go ahead without India in a Chabahar Port railway project”.

Notably, India on September 6, this year walked out of the meeting of the Shanghai Cooperation Organization (SCO), after member states rejected New Delhi’s objection on Pakistan’s new map regarding the IIOJK, taking it as a threat to regional peace and prosperity.

Instead, the SCO countries supported Pakistan’s map which showed the entire disputed region of Jammu and Kashmir as part of its territory. They also appreciated Pak’s deep commitment to peace in Afghanistan through an Afghan led and owned peace process.

While, President Xi Jinping has decided not just to stand up to President Trump in the ongoing trade war, but to take a much more assertive position, whether it be towards the pro-democracy demonstrations in Hong Kong or to China’s long-standing claims over Taiwan.

Besides, rejecting Trump’s false allegations against Beijing about COVID-19, Lijian Zhao, an official spokesperson for the Chinese Ministry of Foreign Affairs stated on March 12, 2020 that the US athletes participated in the Military World Games, held from October 18–27, 2019 in Wuhan might have brought the Coronavirus epidemic to Wuhan from where it originated. In fact, it was part of America’s biological war against Beijing.

The US has almost 7,406,146 confirmed cases of COVID-19 with the death toll of more than 210,750 people. Now, America has become coronavirus-epicenter.

The companies, created by America and Europe in China with all the technology put in by these exchanges and their capital they passed into the hands of China, which is now rising with all that technological potential and will be able to set prices at will to sell everything they need to the West.

On the whole, the Trump Administration’s foreign policy often lacks a clear strategic aspect. In contrast, China knows exactly where it wants to go and it has the strategy and the means to get there. Indeed, for all intents and purposes, it may have already arrived.

Sometimes, the hunter becomes the hunt and the gunner himself becomes a target. It happens so with the US.